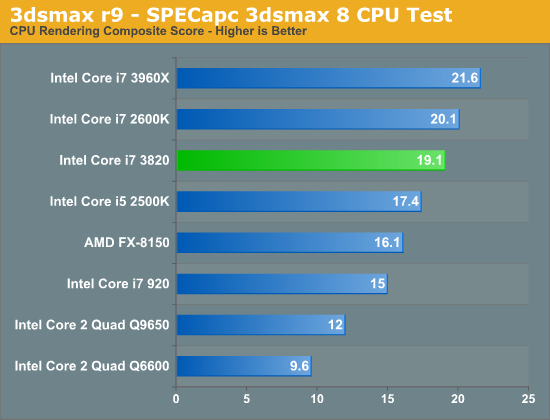 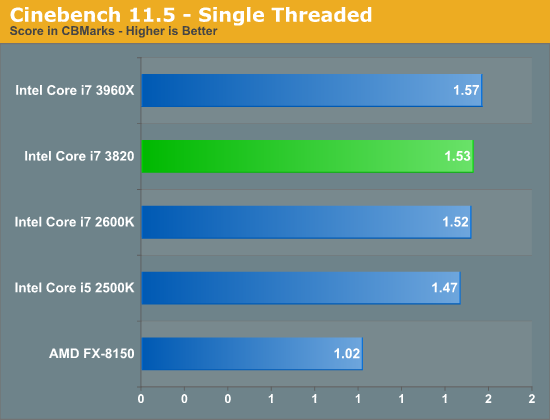 With only a 100MHz clock speed advantage over a 2600K when running in single core turbo mode, the 3820 isn't much faster than the 2600K in our single threaded Cinebench test. The additional L3 cache doesn't have much of an impact here, although I suspect that has more to do with this particular workload rather than a general statement about the 3820. Let's look at multithreaded perf: 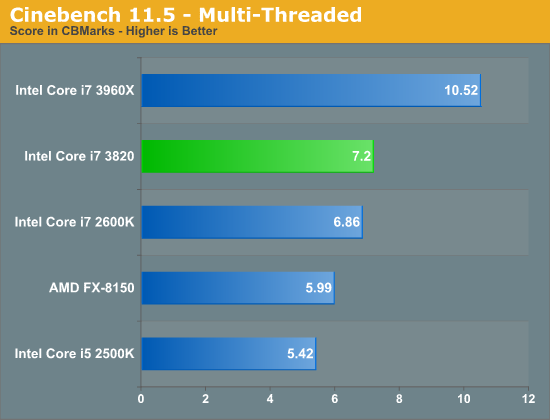 The performance gap increases to 5% once we ramp up thread count. The extra performance is mostly due to clock speed here, although you'll see later on that there are some applications that definitely appreciate the larger L3 cache. 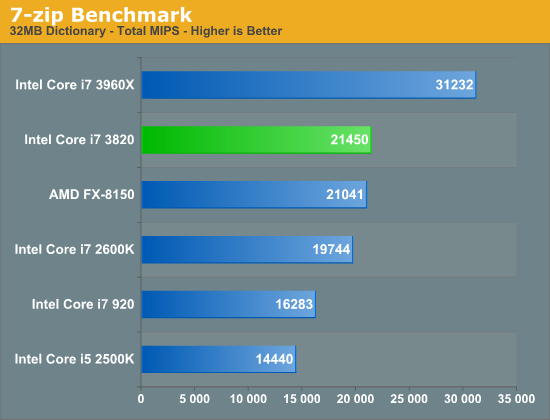 The 7-zip benchmark gives us a good example of what the SNB-E platform can offer given the right workload. Here we see an 8.6% performance advantage, despite a much smaller clock speed advantage. The added L3 cache helps out a bit here, although obviously there's a huge gap between the 3820 and its hexa-core brethren. 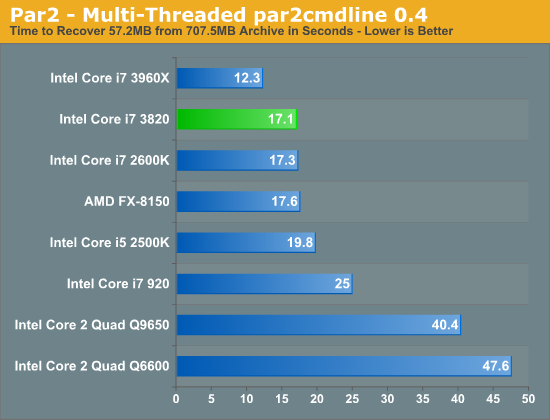 In tests that have more of an IO influence the difference between the 3820 and the 2600K is negligible, it will take higher clock speeds and more cores to really separate SNB-E from the vanilla SNB systems.

TrueCrypt is a very popular encryption package that offers full AES-NI support. The application also features a built-in encryption benchmark that we can use to measure CPU performance: 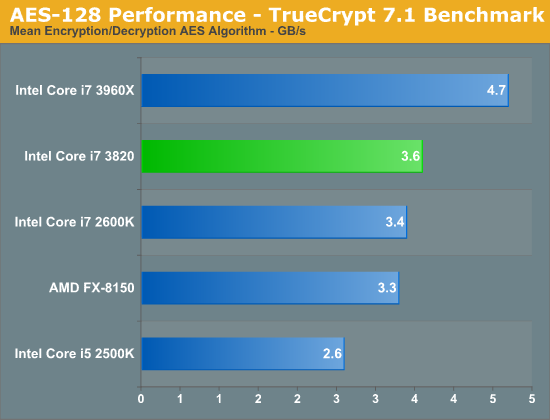 Encryption speed once again scales with core count and clock speeds, the additional L3 cache doesn't do much in this benchmark. 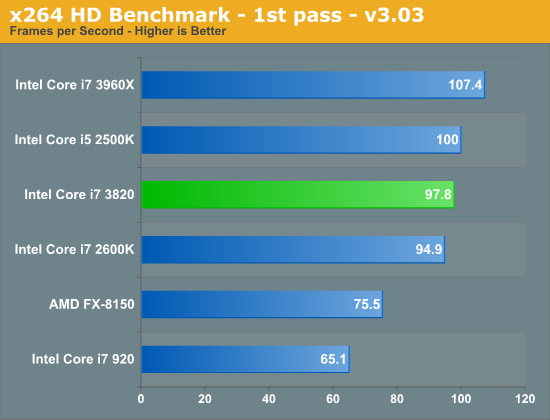 We see a slight advantage over the 2600K in our x264 HD benchmark, however video transcoding doesn't benefit all that much from the small gains the 3820 offers. Most client users would be better off with the Quick Sync enabled 2600K, and the serious video professionals will want to invest in a six-core 3930K at the minimum. 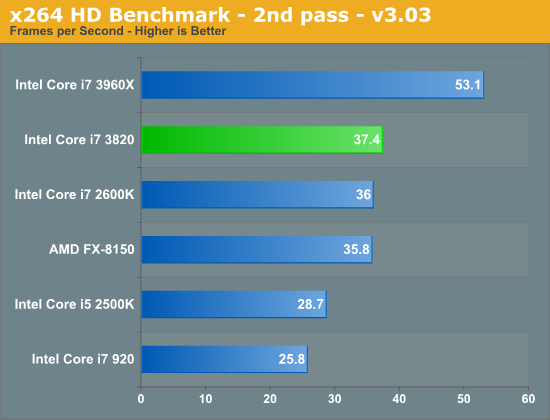 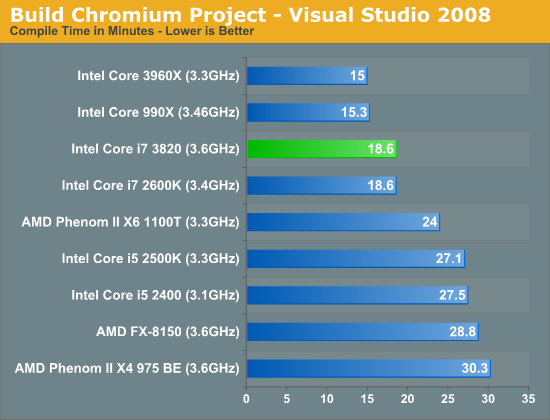 Again we see a step function improvement when moving from four to six cores in our compile test, but no change between the 2600K and 3820. If you're building a dev workstation you're going to either want to save money and grab a 2600K or move to six cores for better performance. It is worth mentioning however that if you need eight DIMM slots the 3820 might be a better option than the 2600K, allowing you to outfit your workstation with insane amounts of memory. 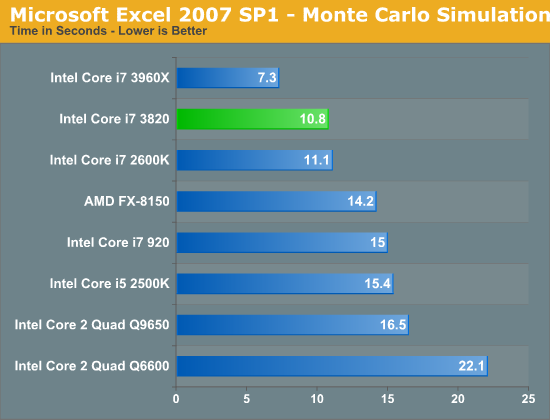 Our Monte Carlo simulation test is CPU bound but the 3820 shows a marginal improvement over the 2600K. 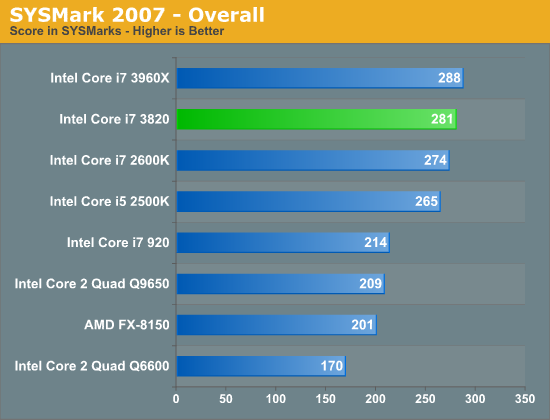 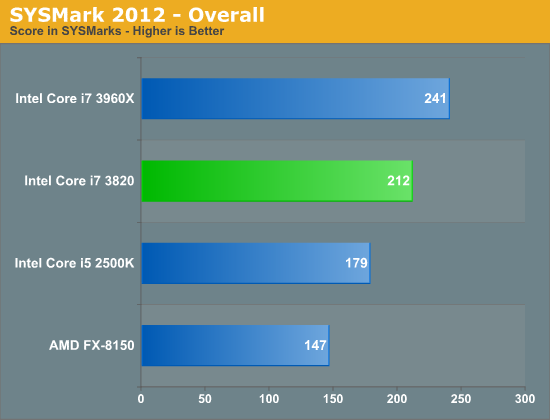