The dock experience is better than I had originally written, but I still have issues with the setup. Typing on the dock is a non-issue, in fact I'd call it a pleasure, as long as you're fine with the short travel of chicklet style keyboards. Other than some slight differences in keypress sound, the dock's physical keyboard is very similar to the MacBook Air keyboard. Given how closely ASUS learns from Apple, this is a decision I'm not surprised by.

Many of you have asked about the experience with the dock connected and whether or not the Prime is capable of replacing a netbook or notebook. Depending on your usage model your satisfaction level will vary. As a glorified typewriter the Prime + dock gets the job done. ASUS preloads the tablet with Polaris Office just like it did back with the original Transformer. This time around however Honeycomb is far more stable, and as a result I don't get the crashes in the middle of writing like I used to. Honeycomb still does crash from time to time but now it behaves a lot more like a reliable OS than it did when it was first introduced. 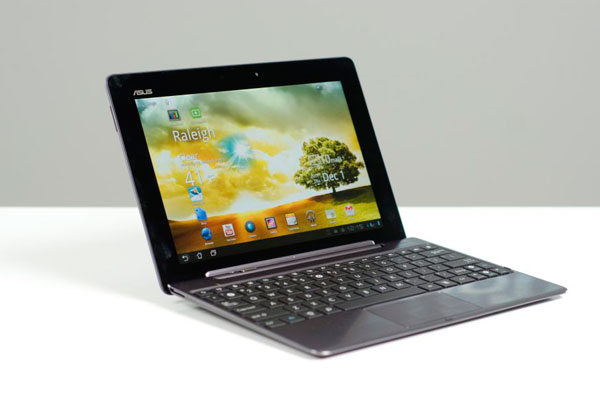 What Polaris Office really needs is an auto save feature. I mentioned this in our original Transformer review, especially as the app would frequently crash back then. Now it doesn't crash so frequently but there's another issue—if you switch to another app while you're typing in Polaris Office, and Android's process manager unloads Polaris Office from memory, you'll lose any unsaved changes to your document. This doesn't happen all of the time. For example, I spent a lot of time in Polaris writing the Momentus XT review and switching between it and the Honeycomb browser without ever losing any data. However, doing the same experiment while installing Pandora and Twitter apps from the Android Market resulted in Polaris being evicted from main memory and me losing any unsaved changes to my document. While I understand this is outside of ASUS' control (short of outfitting the Prime with more memory), it's something that I do believe impacts the overall experience.

Multitasking in Honeycomb with the dock isn't too bad. A while ago ASUS added alt+tab support to the Transformer platform and the Prime gets it as well. The biggest usage hurdle here is the fact that the alt key is only on the right side of the keyboard. Once you get used to that however all you need to do is hold down the alt key and hit tab to cycle through recent apps. This addition alone is a huge boon to using the Transformer Prime + dock as a netbook replacement.

As a machine that's used for web browsing, checking email and taking notes, the Prime + dock is easily a netbook alternative that's significantly better thanks to its tablet flexibility. I still personally prefer a MacBook Air as my choice of ultraportable but that's mostly because I tend to have a heavier workload while on the road. Despite the Prime's quad-core CPU, performance isn't quite good enough for a heavy multitasker. Not to mention that Honeycomb's responsiveness is just as much of a limit there as well.

The trackpad is still a disappointment to me on the dock. Not only is the track area pretty small but the surface of the trackpad isn't the sort of glass smoothness we've come to expect. Two finger scrolling on the trackpad suffers as a result, which forced me to scroll via the touchscreen instead. Thankfully the Prime, while docked, is still close enough to the keyboard to touch without having to reach out too far.

The security of the dock connection doesn't inspire a whole lot of confidence. With the tablet locked in place, there's still a few millimeters of travel if you rock the tablet back and forth. When closed in its clamshell however you'd be hard pressed to tell the Prime + dock apart from a traditional netbook/notebook. That's the beauty of building the two parts of the system out of aluminum; it all feels very solid when closed.

If you plan on doing a lot of typing on your Transformer, the dock is an obvious must have. Still, it's important to keep in mind that just because you have a keyboard doesn't mean the system will turn into an Ultrabook/MacBook Air alternative, particularly in the multitasking/performance department, but it is a nice addition if you're fine with the limits of a tablet.