Changes to the Browser & Performance Analysis

Honeycomb's web browser has always had an issue properly loading Reddit.com. In testing the Transformer Prime, the fact that Reddit loaded properly was one of the first things I noticed—leading me to believe that ASUS and NVIDIA had done some work to customize the browser for the Prime and Tegra 3. This customization work is also evident if you watch the manner in which web pages are loaded on the Prime versus any other Honeycomb tablet, including the original Eee Pad Transformer. The difference isn't really better or worse, just clearly different.

It turns out that there are a number of improvements to the Honeycomb browser for Tegra 3 platforms. The first has to do with threading and GPU acceleration. Google has been steadily moving away from using its skia libraries for drawing to the screen in Android. These libraries are mostly run on the CPU. With Honeycomb Google moved many elements of the OS to OpenGL ES based rendering, but parts of the browser still use these non-GPU accelerated skia libraries for displaying rendered web pages. With Ice Cream Sandwich (Android 4.x), Google moved the browser to OpenGL rendering but unfortunately Tegra 3 would debut on Honeycomb and not ICS so something had to be done. NVIDIA made two primary changes to the Honeycomb browser for Tegra 3. For starters, it further threaded a lot of the skia libraries to better take advantage of the four A9 cores in T3. It also moved some more components of the browser's display pipeline to OpenGL. The change isn't nearly as dramatic as what we'll see with the move to ICS, but it's a step forward. 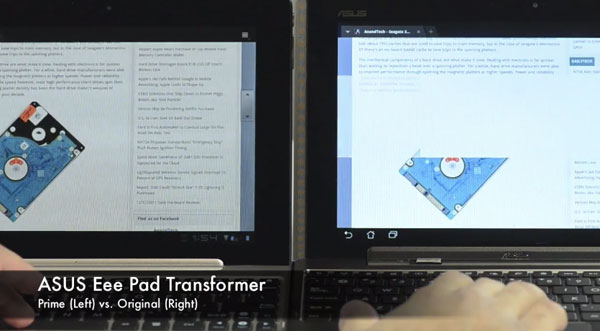 There are some slight improvements in scrolling performance compared to the Tegra 2 build of Honeycomb. You don't get as much white blocking while scrolling on the TF Prime compared to the original (only when scrolling naturally, using the fast scroll bar on the right is the same on both). 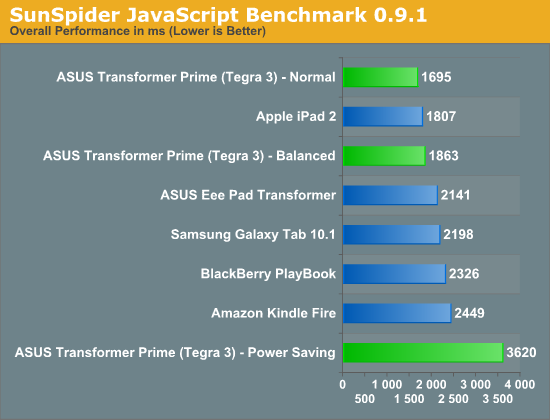 NVIDIA also updated the JavaScript rendering engine in the Tegra 3 build of Honeycomb, which is likely responsible for some of the gains we saw in our original SunSpider numbers (higher CPU clocks helps a bit here as well).

The impact on web page loading performance isn't as dramatic as you'd expect. In general the Prime loads web pages in about the same amount of time as the original Transformer. Some web pages load quicker others load slower and it really varies from run to run. In my testing the original Transformer actually seemed to be more consistent in web page loading times. Whatever changes NVIDIA made to the browser seems to have resulted in this behavior. While there's no major performance gain when it comes to loading most web pages, the difference is that parts of the workload are spread across more cores, allowing each of the cores to run at a lower frequency and thus voltage. 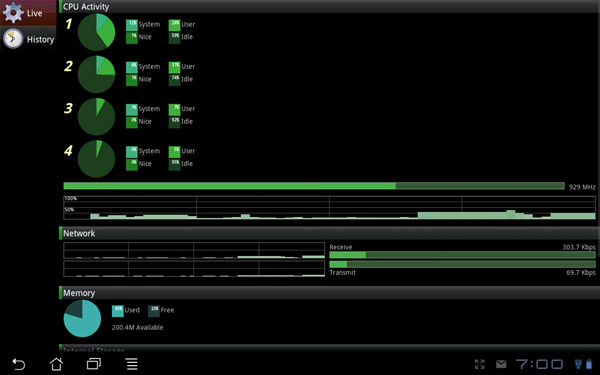 I stand by my original assessment of the Prime's performance. The place you notice the additional CPU cores the most is when multitasking; unfortunately Honeycomb still degrades into a sluggish mess if you ask too much of it, which in turn limits the seat of the pants impact from having twice as many cores. Whereas the move from one to two cores was instantly noticeable on Android phones, the move from two to four is understandably less appreciable. The Prime as a whole feels much faster than its predecessor, but it's unclear to me how much of that is due to the faster GPU, higher CPU clocks, increase in memory bandwidth, NEON support, or the additional cores. I'm willing to bet that the faster GPU and increase in CPU clocks are the most noticeable of the improvements, followed by the increase in core count. I don't mind the extra cores, but I do get the feeling that we'd be better off with two faster cores than four A9s. With A15 and Krait really designed for 28nm, NVIDIA's decision to increase core count at 40nm was probably better for end users than simply increasing CPU clocks on Tegra 2.

I suspect Ice Cream Sandwich will remove some of the software bottlenecks that make the Prime feel sluggish under heavy load, at which point I may have to revisit this assessment. There's also the concern of how Tegra 3 will stack up against Krait based solutions in a few months time. I still feel like the Transformer Prime is a good buy today if you're looking for an Android tablet, but 28nm silicon is less than six months away....