Our next two tests are taken from our own internal infrastructure. We do a lot of statistics tracking at AnandTech - we record traffic data to all articles as well as aggregate traffic for the entire site (including forums) on a daily basis. We also keep track of a running total of traffic for the month. Our first benchmark is a trace of the MS SQL process that does all of the daily and monthly stats processing for the site. We run this process once a day as it puts a fairly high load on our DB server. Then again, we don't have a beefy SSD array in there yet :)

The UpdateDailyStats procedure is mostly reads (3:1 ratio of GB reads to writes) with 431K read operations and 179K write ops. Average queue depth is 4.2 and only 34% of all IOs are issued at a queue depth of 1. The transfer size breakdown is as follows: 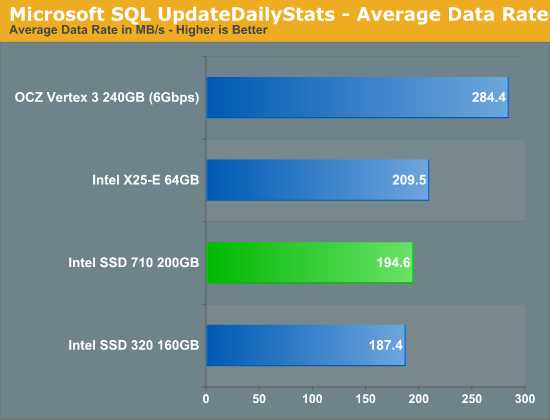 In the first of our two SQL tests the 710 and X25-E are far closer than they were in the Swingbench results. Although the 710 uses MLC-HET NAND, it delivers 93% of the performance of the X25-E. The SF-2281 based Vertex 3 pulls ahead, but this is obviously a consumer drive and not something I'd expect 710 customers to be cross shopping. An enterprise version of the Vertex 3 with a proven track record could be a very interesting option however. 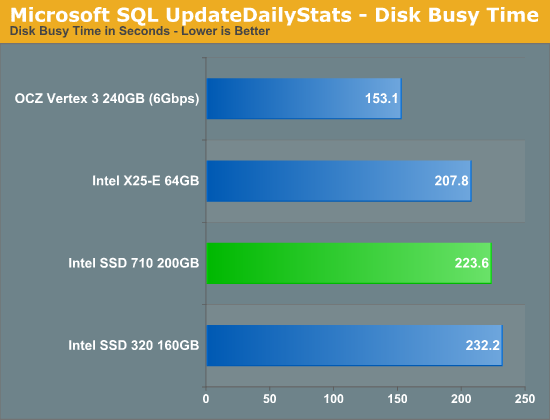 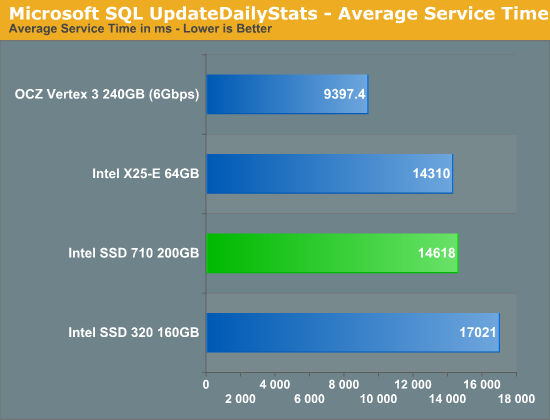 Despite relatively close average data rates, average service time is significantly improved over the desktop 320. Furthermore the 710 cranks through IOs at nearly the same latency as Intel's X25-E. Under heavy load, the X25-E and SSD 710 are virtually indestinguishable. Once again SandForce shows its strengths quite well here.