When Intel entered the SSD market one of its declared goals was to bring the technology into the mainstream. The goal was so important to Intel that its consumer drive was branded X25-M, with the M standing for mainstream. Intel's desire for SSD ubiquity wasn't entirely altruistic however. Mechanical storage acted as a potential gate to increasing CPU performance. Eventually, without significant improvements in IO performance, CPU improvements would be less visible to most users. SSDs would help alleviate this bottleneck.

It wouldn't be untrue to say that Intel accomplished its mission. The client SSD market was in a state of disarray before Intel arrived on the scene. Although we still have problems today, there are a number of affordable options for end users and lots of competition. Samsung, Marvell, Indilinx, JMicron and even SanDisk are now vying for control of the market.

With healthy competition, significant performance improvements and (hopefully) improved reliability in the consumer SSD space, Intel will actually begin defocusing itself from this market over the coming years. Intel needs to keep margins as high as possible to appease shareholders, and the consumer SSD business is in a race to the bottom. Dollars per GB are all that matter here once you deliver a certain level of performance and reliability.

Intel won't abandon the consumer SSD market completely, it will still compete in the high end space but there's a good reason that the mainstream moniker has been dropped from Intel's product names. Intel will shift more of its attention to the enterprise space, bringing that technology to the high end desktop/workstation users where it can (e.g. Cherryville will be focused on both enterprise and enthusiast desktop users). But as you have already seen, I wouldn't expect Intel to actively compete in driving mainstream SSD pricing down further. That market now belongs to the players I mentioned above. 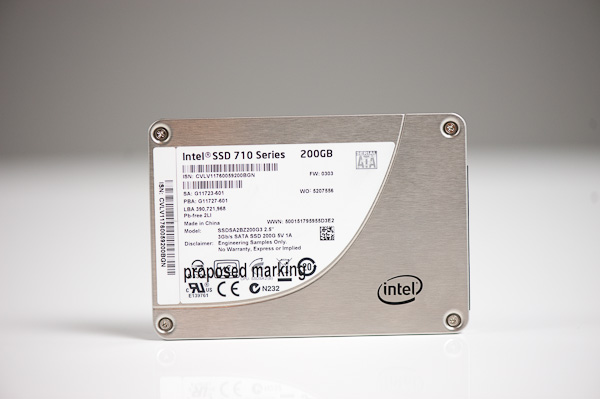 What better way to kick off the shift in focus than with a new enterprise drive: Intel's SSD 710, the long awaited successor to the X25-E. Unlike previous Intel SSDs however the 710 isn't aimed at significantly improving performance. Instead the 710 attempts to offer larger capacities than the X25-E, at similar endurance and performance levels. That's right, the 710 shouldn't outperform the X25-E, it'll just be cheaper.

At first glance that's not a very impressive claim. The X25-E came out in 2008 (available in early 2009) and hasn't been updated since. Delivering performance similar to that of a three-year-old SSD doesn't sound all that exciting. If huge performance gains are what you're after, the SSD 710 isn't for you. 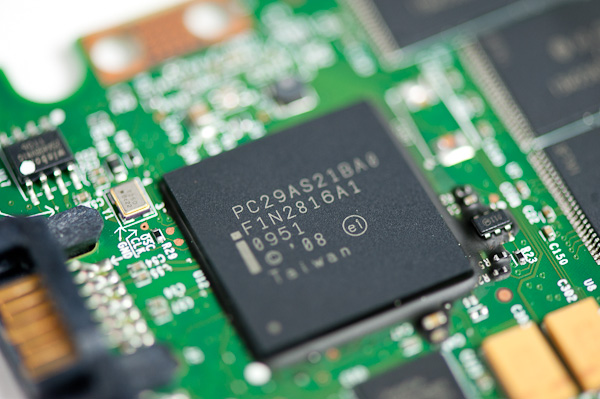 The 710 is built off the same architecture as the Intel SSD 320. It uses the same controller but with a newer firmware revision. The firmware is obviously also tuned for enterprise workloads.

Since it uses the same controller as the 320, you get the same benefits. There's still no 6Gbps support, but you do get full disk encryption (enabled via ATA password). Intel also outfits the 710 with capacitors to ensure any data stored in the controller's caches can be committed to NAND in the event of a power failure. The 710 also includes surplus NAND arrays (and data redundancy). In the event of a full NAND die failure, you shouldn't see any data loss.

What Intel promises with the 710 is reliability and a clear upgrade path from the X25-E. The idea here is most enterprise workloads exist on mechanical drives today. Moving to a small array of SSDs quickly alleviates any IO bottlenecks, then the only issues that remain are cost, capacity and reliability. It's the three of these areas that the SSD 710 looks to address.

Don't get too excited about the cost angle though. While the Intel SSD 710 drives cost-per-GB down much lower than the old X25-E, it is still an enterprise drive so expect to pay more than what you'd find as a consumer.

The pricing breakdown is below:

At $6.50/GB the 710 is significantly cheaper than the outgoing X25-E which is still priced at over $11/GB today. When it first launched the X25-E commanded over $15/GB. Regardless of performance, these prices alone are enough to drive away consumers. If you haven't gotten the hint by now, the 710 is strictly for enterprise customers.

Capacities are also significantly higher. While the X25-E topped out at 64GB, the 710 will take you all the way up to 300GB.

Reliability wasn't an issue with the X25-E, thus it mustn't be an issue with the 710 either. There's just one problem: the X25-E could depend on 50nm SLC NAND, boasting an endurance rating of 100,000 program/erase cycles per cell, the 710 however needs to somehow equal that with 25nm MLC NAND. As a reference, consumer-grade MLC NAND is good for 3000 - 5000 p/e cycles.

Why use MLC NAND? The shift to MLC is what gives the 710 its cost and capacity advantages over the X25-E. How does Intel have its cake and eat it too? By using something it calls MLC-HET NAND.