Stuffing in the Kitchen Sink

While I will readily admit I fell in love with the Alienware M17x R3 while I was testing it, using the M18x has left me feeling a bit cold. That may seem unusual given that stylistically it's virtually identical to the M17x R3 (much less the rest of the Alienware mobile lineup), but hear me out.

At first glance the M18x is simply a bigger M17x R3, and many of our remarks on that unit apply here. There's an added rubber accent to the lid near the hinge, and the number of exhaust vents on the back has doubled to cope with the increased thermal load of running an overclockable CPU and a pair of 100-watt GPUs. With the increased fan size, the M18x is also thicker than its "little" brother, and Alienware makes use of the extra chassis height by adding an ExpressCard/54 slot (something I wish they'd included with the still meaty M17x R3). 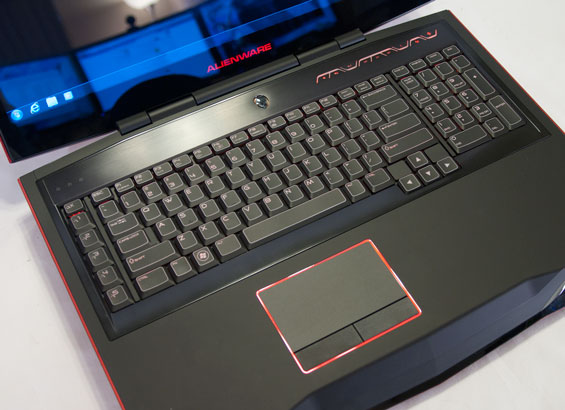 Where things get hairy is when you open the M18x. The screen is still 1080p, but at 18.4" that suddenly seems ever so slightly less impressive than at 17.3". The slight decrease in PPI isn't really a huge issue since getting better than 1080p is still fairly difficult even on desktops, and 1080p at 18.4" on a regular desktop monitor is next to impossible to find. You'll notice the keyboard and media controls above it are also identical to the M17x R3, but unlike the M17x, there's no 3D display option. We're not sold on 3D by any stretch, but 120Hz panels are still a benefit (all else being equal), and with 580M SLI the M18x can viably handle stereoscopic 3D gaming; you'll have to go with an external 3D display for such use.

Having had a chance to play with the M18x and M17x R3 a bit more, though, I do have a fairly major complaint with the design of the chassis. The average user is going to want to rest his wrists on the palmrests above the speakers, but the problem is that the contour there is a hard edge that digs into your wrists a bit. You'll have to adjust your posture and approach when you use the keyboard to prevent these from becoming painful.

My other issue with the keyboard, however, is specific to the M18x, and I can see this being hotly disputed by a couple of users in the comments. For the record I'm not a fan of keyboards that have gaming shortcut keys which line up with the sides of the keyboard proper, like Logitech's G series; I still cling fervently to my Microsoft/Razer Reclusa despite the fact that it's out of production. The reason for this is that when I need to hit the Control key, I just let my hand drift to the bottom left of the keyboard and I'm good. Likewise, with the Escape key, I drift to the top left. In my muscle memory I know the keyboard by both the classical home row, but also by the borders. My point is that when working with the M18x's keyboard, I found myself routinely hitting the gaming shortcut keys when I wanted one of the normal keys because they throw the whole keyboard off-center.

And then there's the sheer size of the M18x. For my personal computing needs I use both a 17.3" Alienware M17x R3 (I confess, I picked one up for myself after the last review) as a mobile workstation and my 11.6" ThinkPad as a netbook/writing system, and the distinction works out beautifully. I can understand the need for big notebooks, yet the M18x seems too big by any measure. I've felt that way about Clevo's X7200 notebooks, but the feeling really gets hammered home when you can look at the M18x and then the M17x R3. The M18x is huge, adding two pounds on top of the already portly M17x R3, and despite the support for dual-GPU configurations and insanely fast extreme edition processors I still feel like the extra mass is beyond the pale.

Of course, many of these are matters of taste and your mileage may vary. You're not going to find configurable gaming shortcut keys on most other gaming laptops, and the keyboard is still light years better than anything you'll get on a Clevo. And say what you will about the lighting, but until you've played with it and decided you were going to be the only BMF walking around with a laptop that glows violet, you can't truly say it's tacky.