If you remember, EPoX had some of the first and the best VIA based Super7 solutions back during the reign of the K6-2 and K6-III as AMD's flagship CPUs. It only makes sense that EPoX should leverage their previous history with VIA to produce one of the first motherboards based on VIA's KX133 Athlon solution. Dating back to well before last year's Fall Comdex in Las Vegas, EPoX has been actively promoting their KX133 based design, which was just recently dubbed the EP-7KXA. A quick visit to their front page reveals that they are continuing to do so: 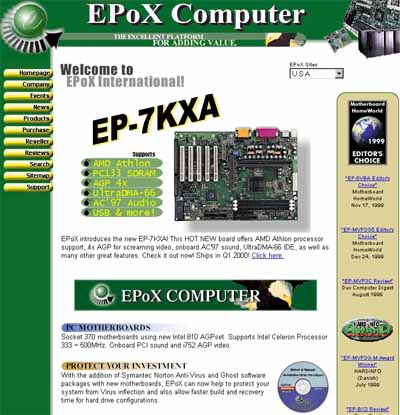 This active promotion and lack of shame when talking about the board is a very commendable act on the part of VIA, and luckily enough, while it's not the best, the 7KXA as a motherboard is just as praiseworthy.