In and Around the Fractal Design Arc Midi

Good artists borrow, great artists steal, and excellent case designers are like Dr. Moreau, fusing elements from different competitors together to produce something the market has really been asking for. In that vein, Fractal Design's Arc Midi borrows a lot of fantastic ideas from a few different places and comes up with something very special.

First, I'm a huge fan of the aesthetic. While the front is only given the appearance of brushed aluminum (all of the advertising material calls it a "brushed aluminum like look"), that's actually almost better than just using brushed aluminum on just one part. I also like the choice to use just two 5.25" external bays and the discreet row of I/O and buttons at the top of the case. By only putting in two bays, Fractal Design frees up most of the front of the enclosure for air intake. The way the grille is recessed into the bezel is particularly pleasing, and this is a design cue that extends to the top of the enclosure. Note that both the front panel and the top grill are removable to allow the user to clean the fan filters as well as mount additional fans.

I do think this is the first time I've ever been unhappy to see a side intake fan vent, though I probably wouldn't be as bothered by it if Fractal Design had included a fan. Because of how nice the case looks otherwise, that vent breaks up the style a bit. It's a sacrifice for practicality's sake but aesthetically it's a little disappointing. 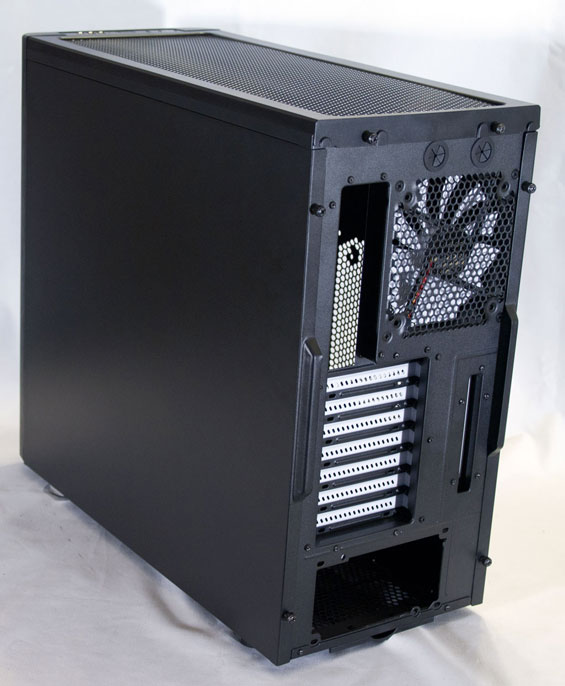 When you get to the back of the Arc Midi you'll see Fractal Design opted for white accents for the fan blades and the ventilated expansion slot covers. I actually really like the "7+1" expansion slot design, where there are seven in a row and then an eighth mounted laterally above the others. This is something Fractal Design seems to have borrowed from Cooler Master, and it's a great choice, giving you a place to mount the fan controller without having to sacrifice any expansion slots on the motherboard. I'm ultimately a bigger fan of eight expansion slots in a row, but this is still appreciated in a mid tower. 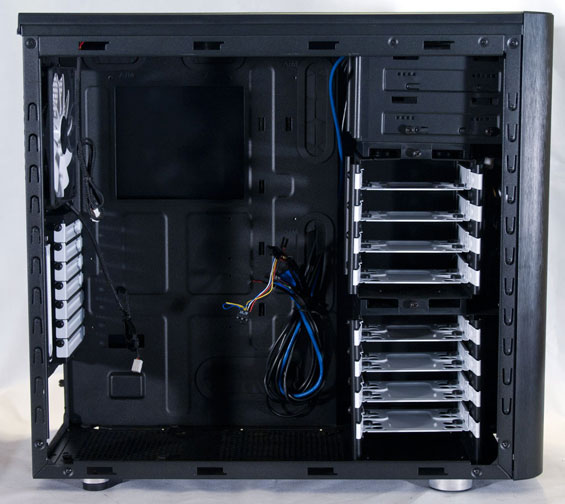 Opening up the Arc Midi reveals a thoughtful interior that takes a lot of cues from Corsair while improving a bit on their design. Fractal Design includes two drive cages with four drive sleds each, and the top drive cage can actually be either rotated ninety degrees or removed entirely. In the default configuration, the metal drive sleds (metal instead of cheap plastic!) orient the drives facing behind the motherboard tray. 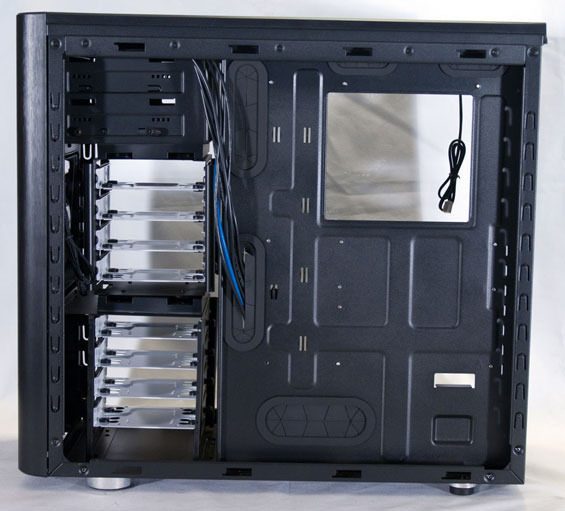 That space behind the motherboard tray is another area where Fractal Design one-ups a lot of the competition: it's copious. The rubber-lined grommets surrounding the routing holes in the tray also stay in place; with other cases I've often just removed these because they've come loose so easily, but in the Arc Midi they're in relatively firmly and I never had any of them pop out during assembly.

It should be pretty obvious that I'm a big fan of how the Arc Midi is laid out. Fractal Design has taken some good exterior aesthetic ideas and combined them with an improved interior that ought to make Corsair take notice. Corsair has traditionally been my benchmark for ease of assembly, but the Arc Midi has all the earmarks of a smart internal design.