By default, the SGS2 comes with Swype and the Samsung keypad preinstalled. I’ve moved away from Swype in recent months and started taking to the default gingerbread keyboard quite a lot, and it’s odd to see that Samsung has removed it from their stock ROMs. For me, this was one of the major enhancements that came with 2.3, and it’s puzzling how many different OEMs choose to purposefully not include it, and instead include their own strange keyboard in its place. 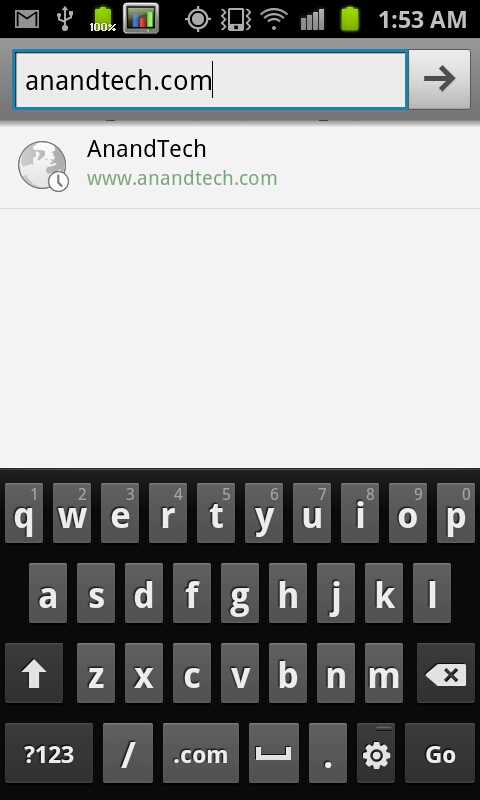 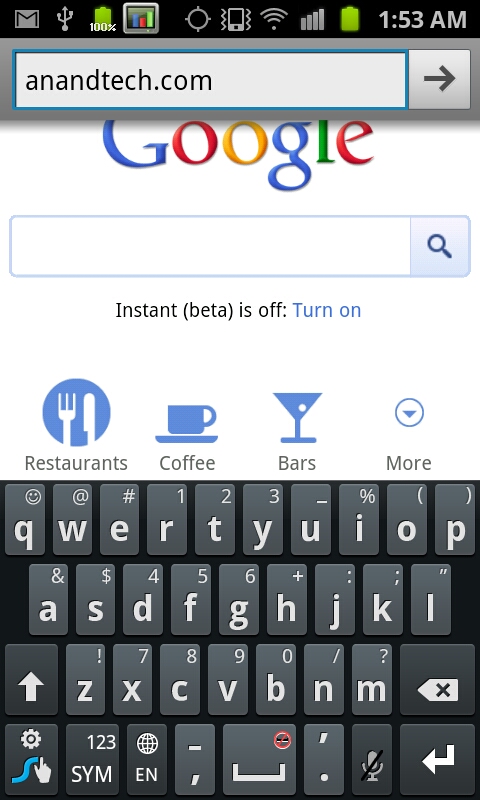 The Samsung keypad honestly is less than ideal and feels like it belongs back in the Android 2.1 world from whence it came, which is likely why Swype is set as default. It lacks autocorrect functionality by default and generally just looks drab. 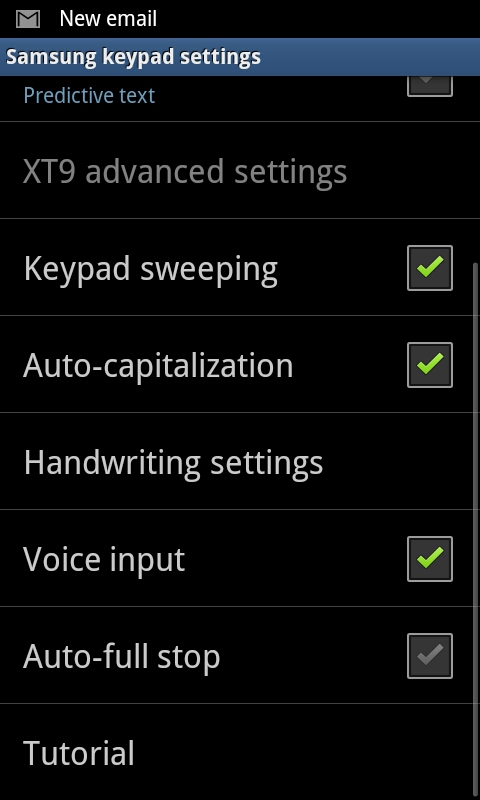 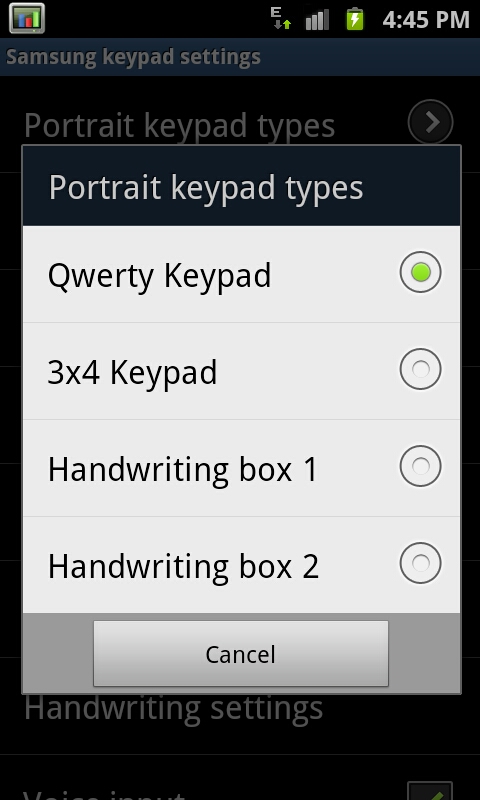 Getting autocorrection enabled requires diving into the menus and enabling it for your given language, and even then isn’t that great. I guess I’m confused why Samsung would elect to not include the excellent 2.3 keyboard and instead force users to install the APK themselves.

SMS is one of those things that each phone needs to do perfectly, and I think it’s especially worth taking a formal look at when an OEM moves away from the stock Android application. Bring up messaging and you get a list of ongoing conversations sorted by last activity, just like you’d expect. 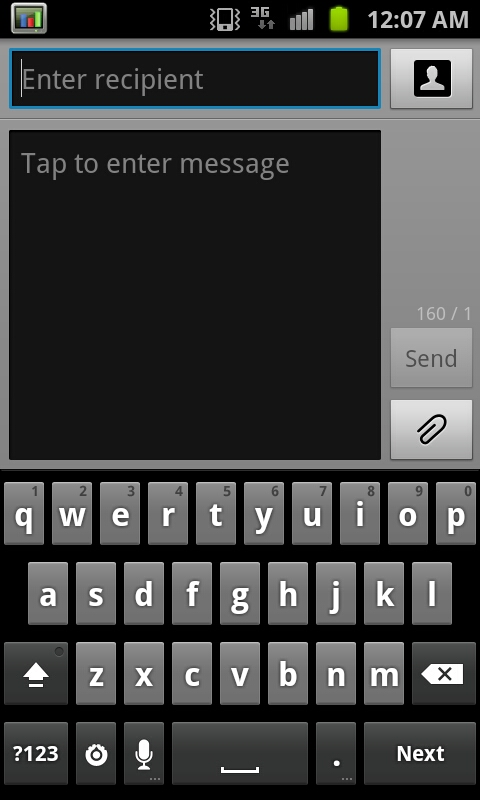 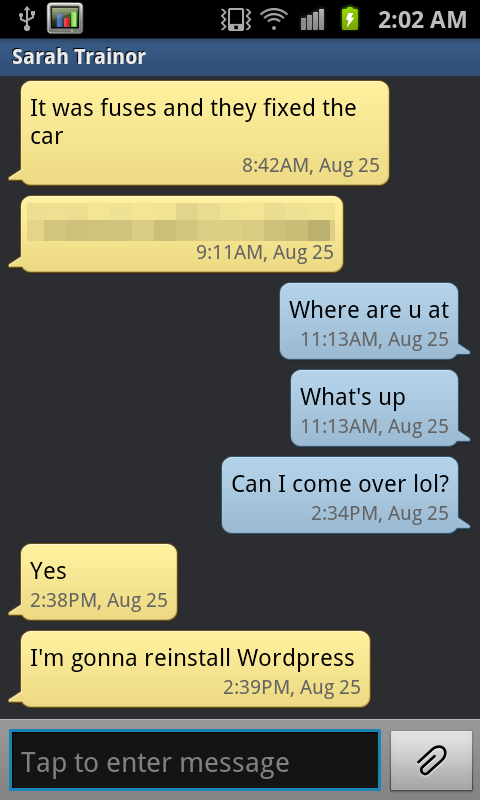 Tapping new gives you a nice, clean composition page complete with character count. The conversation view is threaded and in large speech bubbles, complete with date and time stamps on each message.

Honestly I can find no fault with the Samsung messaging application. It doesn’t make the mistake that other OEMs have made by making font overly huge or decorations take away from usability and vertical space, though the composition box could stand to be a row shorter so more of the thread is visible. In addition, I spent a lot of time hammering on the SGS2’s messaging stack to try and make it slow dramatically like I’ve seen a few other Android phones do - no such lag took place, which is a great sign, even after a few weeks without deleting anything.

Like the original Galaxy S, on SGS2 samsung has made enhancements to the browser that dramatically increase smoothness. At the time we could only explain the performance increase by shrugging and claiming it was GPU accelerated. We know a bit more now about what enhancements are required to make browsing smooth in this fashion, and the answer lies in a backing store. A backing store is essentially a nice way of saying cache, and in this case what’s being cached is the rendered page itself, which is either rendered into a texture or some intermediary that’s a step above final rendering.

A backing store is what makes iOS’ browser so smooth, and you can see it render into the texture (or if you overscroll beyond the render, where it hasn’t yet) with those little grey rectangles. Render into a big texture, and then it’s a relatively free GPU operation to transform and clip that texture when a user scrolls around the page, though zooming will require a re-draw. Until Android 3.x, however, the stock Android browser hasn’t had a backing store, which is why translating around feels choppy. As a result, it has been the burden of OEMs to make their browsers feel snappy by incorporating their own backing stores. HTC works with Qualcomm to bring an appropriate level of smoothness to their devices, I already mentioned Android 3.x has one (which will no doubt carry over to Ice Cream Sandwich), and Samsung again has one this go-around in SGS2 just like they did with the original SGS. 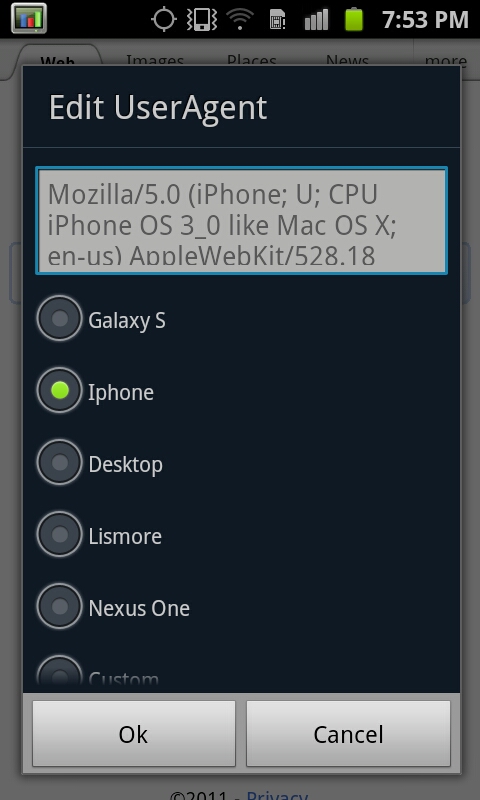 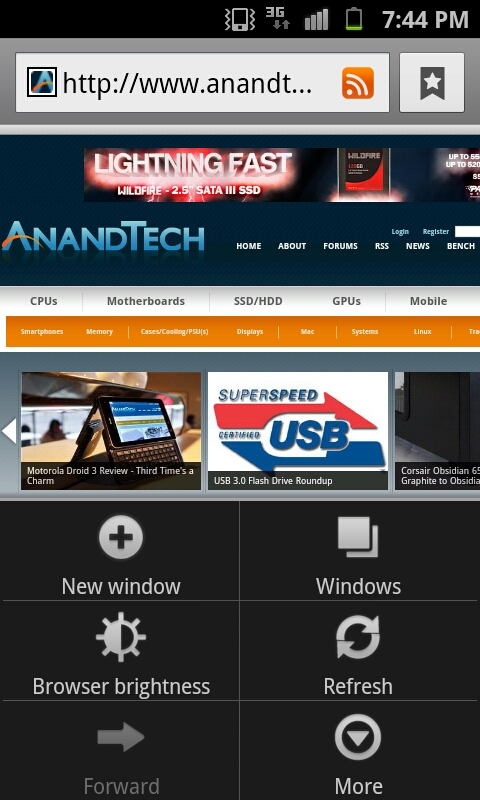 So how good is SGS2’s browser backing store? Very good. Far and away this is the smoothest Android 2.x browsing experience, by a large margin. The only downside to the whole thing is that the browser has 16 bit color, again undoubtedly to make this an easy texture for manipulation by the GPU. I’ve also noticed one or two times that the browser will go to a white screen instead of showing the content after it’s loaded, which to me indicates that getting the backing store always working perfectly with a big page can be a challenge - perhaps GPU memory is at a real premium when this happens. I’m told this is fixed in newer firmware editions. That said, the tradeoff is well worth it, as zooming, translating, just about everything is buttery smooth. Browser smoothness is finally basically at parity with iOS.

What’s very impressive is that Samsung even manages to keep Flash 10.3 plugins animated while panning and scrolling around, something that currently HTC temporarily halts while translating around in their browser. It’s hard to communicate just how smooth and fluid the SGS2 browser is, and I’d encourage interested parties to watch our video which demonstrates it.

Finally, there’s one last semi-hidden browser feature - custom user agents. Enter “about:useragent” into the URL bar, and you can pull up a menu and select between a number of different user agents and masquerade the SGS2 as an iPhone, Galaxy S, Desktop (OS X 10.5.7 Safari), Nexus One, Lismore, or custom. This is something again I wish the stock Android browser would offer similar control over.