The 11-inch MacBook Air comes with a 1366 x 768 display (16:9) measuring 11.6-inches along the diagonal. Ports and features are near identical to last year's model. Up top there's a 640 x 480 camera. Along each side is a USB 2.0 port. Mag Safe and headphone jack are on the left, while Thunderbolt is on the right. There's a single fan inside the chassis that vents between the keyboard and the display hinge.

The 11 is still an amazing form factor. It's painless to carry around and you end up with a tablet sized device that makes no functional sacrifices. To make things even better, now you get a full blown Sandy Bridge CPU inside the ultra slim chassis. 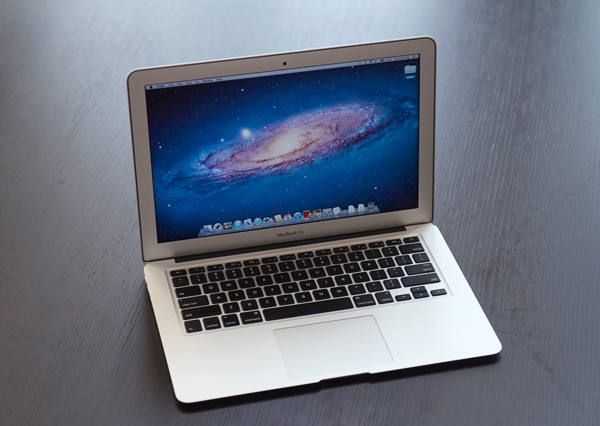 There are really only two things that the 11-inch MacBook Air lacks. For starters, the lack of an integrated SD card reader means anyone looking to do photo work on the go will either need an Eye-Fi or an external USB card reader. Neither is too much of a pain however an integrated reader would be much appreciated.

The second issue with the 11 is its screen size/resolution. At 1366 x 768 you get great pixel pitch on the 11-inch 16:9 screen but there's just not a lot of vertical resolution on the display. The 13-inch model gives you only 5% more horizontal resolution but 17% more vertical, and that's noticeable.

Lion does alleviate some of this problem thanks to its full screen mode. Viewing Mail or Safari in full screen is almost necessary on the 11. Thanks to the 16:9 ratio of the panel, watching movies on the 11 is nearly equivalent to watching them on the 13-inch Air.

The base $999 configuration only comes with 2GB of DDR3 and a 64GB SSD. The latter is excusable if you just don't do much with your system (and technically it's something you can upgrade down the line if you'd like) but the former is a major problem. Memory on the MacBook Air is soldered directly onto the motherboard. Not having to build in a socket helps keep the z-height of the system down to a minimum, but it also severely limits flexibility. For most users interested in a dual-core machine under OS X I'd say that 4GB is probably good enough. While I'd prefer the option of upgrading to 8GB, I think 4GB is livable; 2GB is not. If you're considering the entry-level 11-inch MacBook Air I'd strongly recommend at least upgrading the memory to 4GB. The only exception is if you're just going to spend your time doing very basic tasks on the machine and plan on upgrading again in a year or two. If that's the case save your money and enjoy a 4GB version with Ivy Bridge next year. For everyone else, make sure you get the memory upgrade.

While the 11 is almost tablet-like, the 13-inch MacBook Air still looks and feels like a normal notebook. A really thin, really light notebook. You get a 1440 x 900 (16:10) display that measures 13.3-inches along the diagonal. The port layout is identical to the 11 although you get an integrated SD card reader along the right of the machine. 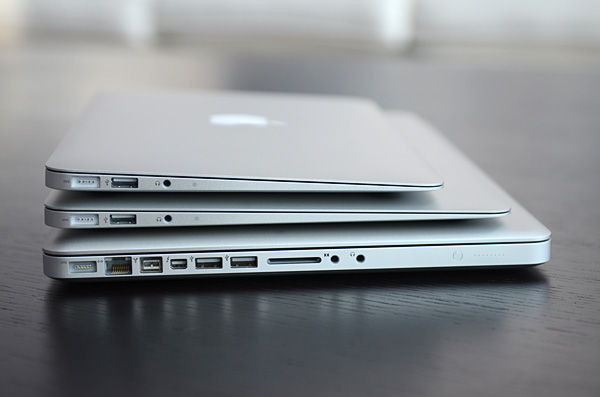 The 13 is really a pleasure to use, despite feeling a lot like a traditional notebook. The biggest difference for me between it and the 11 is the height of the display. Seated on a couch with the notebook in my lap the 13 doesn't force me to look down as much to see the screen. I still have to tilt my head down a bit, just not as much as with the 11.

The 13-inch screen maintains a relatively high pixel density, just shy of the 128 pixels per inch you get from the 15-inch MacBook Pro with the upgraded 1680 x 1050 display. I find the 13 is a bit easier to look at than the 11 with its 135 PPI display, but that's a personal preference. Apple really needs to increase the resolution of its 13-inch MacBook Pro which is a paltry 1280 x 800. 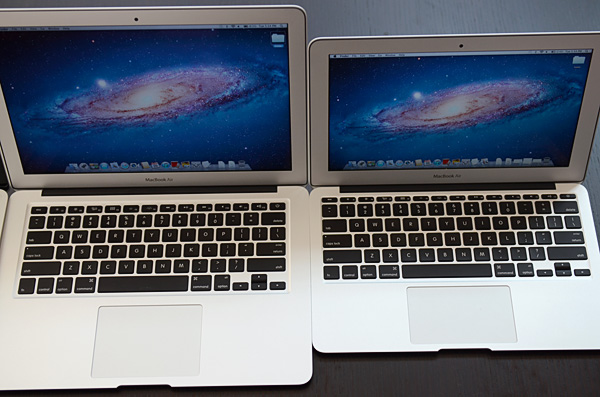