Apple has historically used Samba, an open-source implementation of the SMB file sharing protocol, to share files with Windows machines. First included in OS X 10.2, Samba also enabled Macs to both join and host Windows-compatible directory servers, increasing the then-fledgling OS’s viability in a business setting. However, the Samba team recently began licensing the software under the GPL3 license, which prohibits its inclusion in retail products, and rather than lose these key interoperability features, Apple chose to develop its own in-house implementation for Lion. What does that mean for you, the user?

Well, for starters, Lion’s new SMB implementation is SMB 2.0 only - this is a Microsoft-developed improvement of the specification that was introduced in Windows Vista and continued in Windows 7. This has one major ramifications for Lion users, and I suspect it will only impact a fraction of a fraction of them: Lion computers can no longer be joined to NT Domain Controller directories. These directories are quite old at this point - their successor, Active Directory, came with Windows Server 2000 in 1999, and has become much more robust with each Windows Server release since - but if, for some reason, you or your business uses new or newish Macs on an ancient domain, Lion’s going to break things for you (Lion does, however, remain compatible with Active Directory).

You never want to see an OS lose features, but I can’t say I blame Apple much for making this call, and it’s not a secret that Apple has historically been much less interested in backward compatibility than Microsoft. For people who absolutely need for OS X to have this functionality, Samba is definitely still around, and I wouldn’t be surprised to see someone begin maintaining an OS X-friendly fork of the software. Just know Lion won’t do it out of the box anymore. 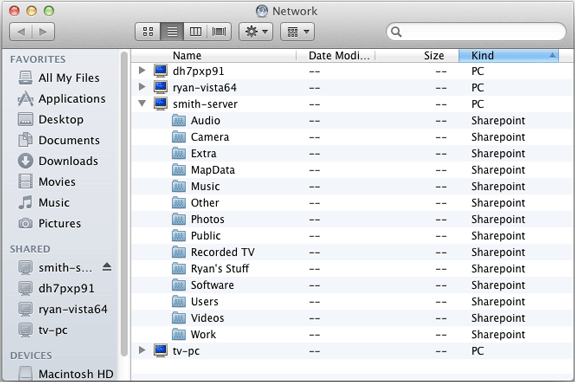 SMB’s main use in OS X is for file sharing with Windows users, though, and I can say that file sharing with users of both Windows XP and Windows 7 (and, by extension, Windows Vista, for what it’s worth) works just fine once you set it up in System Preferences. I was able to copy files to and from a basic share I made without issue.

Anecdotally, I can also say that connecting to and browsing through an SMB share with many files and folders feels faster than Snow Leopard does on the same system connected to the same share. In Snow Leopard, I’d often have to wait for folders with a lot of data in them to populate - in Lion, things are more or less instantaneous. SMB2 was optimized to improve speed over high-latency connections, and I’m sure that accounts for at least some of the increased snappiness.