AMD makes a point of their mobile offerings (A/C/E-series APUs) all offering “all day computing”, with a note that “all day” is defined as eight hours or more. While that’s easy to do with a gigantic battery, doing so with the typical 48/56Wh batteries in mainstream laptops is a lot more difficult. One of their test notebooks apparently manages around 10.5 hours (best-case) with a 62Wh battery, compared to 6.5 hours for a similar Core i5-2410M laptop. Without specifics on all the settings, we’ll just say that our results for “similar” laptops don’t show nearly the disparity AMD achieved, but the important point is that AMD is finally competitive in battery life.

We ran our usual series of battery life tests, with the LCDs set for ~100 nits (70% brightness for the Llano laptop). We shut off WiFi for the idle test and mute audio; the Internet test is run over WiFi and repeatedly loads four tabs of content every minute, again with audio muted; finally, the H.264 playback result is done with a set of earbuds connected and WiFi disabled. Here’s how the Llano laptop stacks up to some recently reviewed laptops—you can compare Llano with other laptops in Mobile Bench. 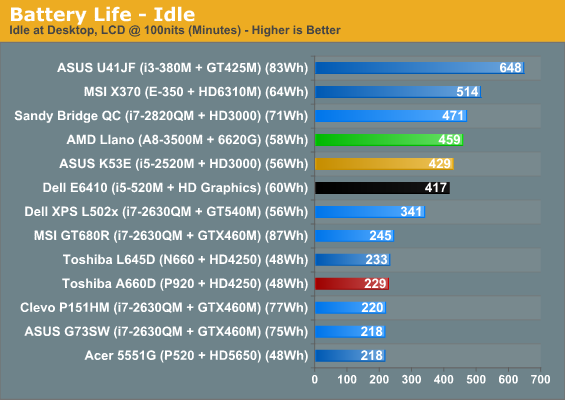 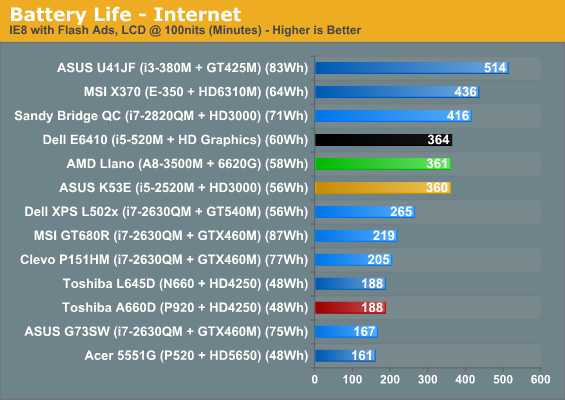 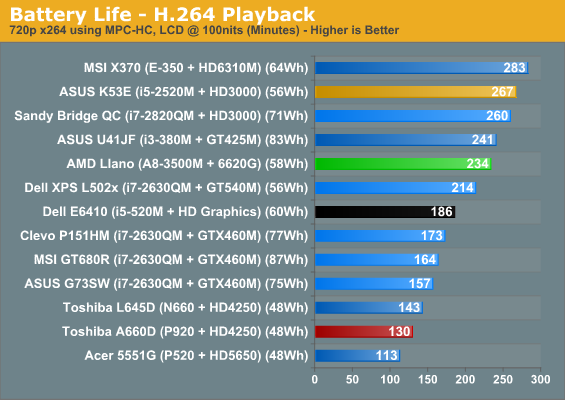 Starting with pure battery life, only three laptops consistently offer longer battery life than the Llano system: the ASUS U41JF, MSI’s X370, and the quad-core Sandy Bridge notebook. Also, the ASUS K53E boasts better battery life in the H.264 playback test, which for whatever reason is a test where SNB has proved particularly potent. Intel’s DXVA decode may be efficient, but it's also possible it's doing less work; we're running the test again with all of AMD's video enhancement features turned off. [Update: I retested with all the AMD video enhancement features disabled, and battery life didn't change, so Intel is simply more efficient at H.264 decoding with SNB.]

Back to the discussion of battery life: all three of the laptops that beat Llano have the advantage of slightly to moderately higher battery capacities, so the comparison isn’t entirely fair. Let’s level the playing field by looking at relative battery life. 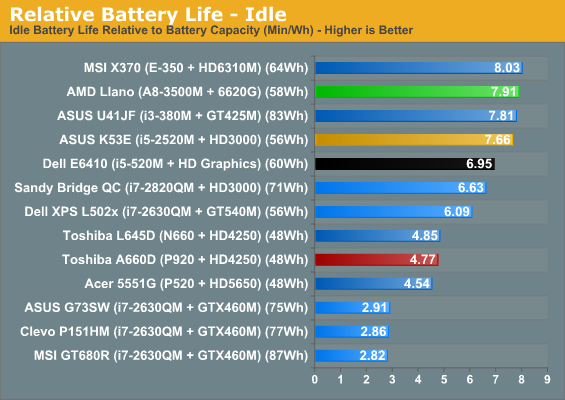 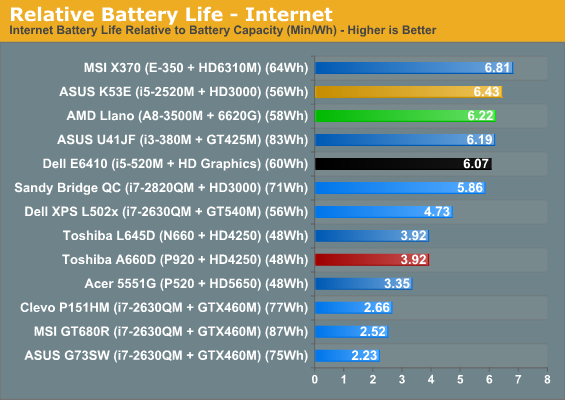 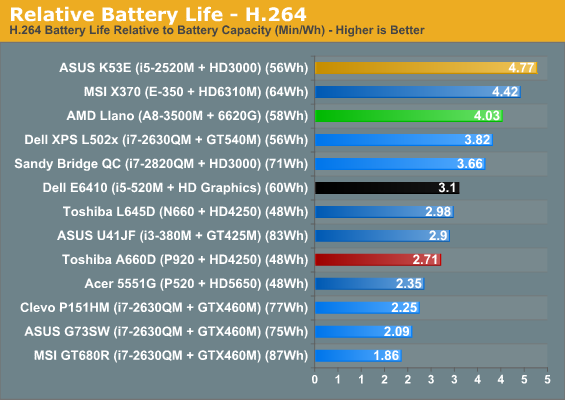 Rather amazing is that Llano actually rises to the top of the charts in the Idle test, and it’s only slightly behind the competition in the other two tests. Considering the X370 is equipped with an E-350 APU, the fact that Llano is even close is surprising. While we should note that the X370 wasn’t the most efficient of the E-350 laptops we’ve tested, we also need to point out that the 13.3” LCD is a lot closer to the 14” panel in the Llano notebook than the 11.6” panels used in the Sony YB and HP dm1z. The dual-core SNB notebook still leads in the H.264 test, and considering it has a 15.6” panel we’d say that relative battery life is very similar between the two.

We also want to talk about AMD’s claims of “all day battery life”. If we accept their definition of 8+ hours, the test laptop doesn’t actually hit that mark in our idle test. We did run the same test again at 40% LCD brightness (around 60 nits) and managed eight hours exactly, but that’s in an absolutely best-case test. For Internet surfing, which represents a more useful metric, the best way to get 8+ hours is demonstrated by ASUS’ U41JF: stuff in a higher capacity battery!

Rounding out the battery life discussion, we also tested battery life while looping 3DMark06 at native resolution (1366x768). This represents a reasonable 3D gaming scenario, and Llano still managed a reasonable 161 minutes. Considering graphics performance is a healthy step up from what Intel’s HD 3000 offers and that AMD manages double the battery life under gaming situations compared to the K53E, mobile gaming is clearly a win.

Overall, for the first time in a long time, AMD is able to offer battery life that competes with and even exceeds what Intel offers with their current mainstream offerings. There are of course a bunch of lower power Intel CPUs we could discuss, but looking at the 35W TDP parts the combination of 32nm and power gating has brought AMD back into the discussion. Even more interesting is that you should be able to get something like our test laptop for $600, possibly less, compared to dual-core SNB i5 laptops that start at $700. But then, perhaps Core i5 isn’t the best comparison for quad-core Llano, despite what AMD might like to say? Let’s move on to general performance and gaming discussions before we decide which mobile part is the “best”.