While the Llano CPU cores may be in need of a major overhaul, Llano's GPU is as new as it gets. Technically based off of AMD's Redwood core (Radeon HD 5570) with some enhancements, Llano's GPU is codenamed Sumo.

The DX11 GPU features five SIMD arrays, each with 80 cores for a total of 400 shader processors. Similar to the updates we saw with this year's Northern Islands GPUs, Sumo does add UVD3 support to the Redwood architecture. Of course since Sumo shares the same die as the Llano CPU cores it is built on GlobalFoundries' 32nm process, making this the first AMD GPU fabbed at GlobalFoundries and not TSMC. 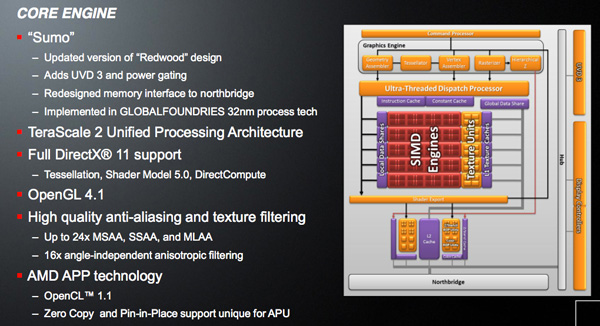 For everything behind the memory controller Sumo is virtually identical to Redwood. Where Sumo differs is in its memory interface. Although Llano is AMD's first performance oriented APU, it's still constrained by a 128-bit wide DDR3 memory interface. That dual-channel memory interface has to be shared by all four Llano cores as well as the Sumo GPU and as a result, arbitration is very important.

Second, and most importantly, AMD can dynamically prioritize memory bandwidth between the CPU and GPU. In most cases, when both processors are heavily consuming data, the GPU is given priority over the CPU. Given today's workloads, prioritizing the GPU for memory accesses makes sense when it's running full tilt. The chances of you stressing all four CPU cores and running at full GPU memory bandwidth requirements are pretty slim today.

With 400 shader processors behind a shared 128-bit DDR3 memory interface, the upper bound for Sumo performance is the Radeon HD 5570. In practice, you should expect performance to be noticeably lower since the GPU does have to share its precious memory bandwidth with up to four x86 CPU cores. 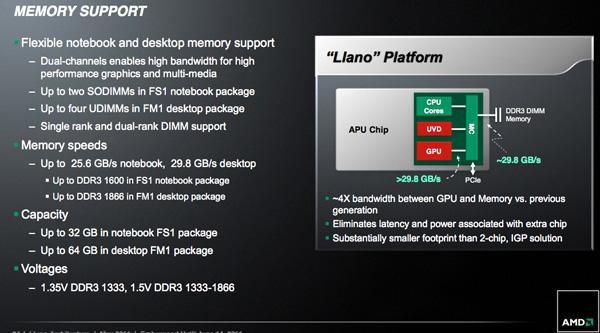 The mobile version of Llano supports up to DDR3-1600 while the desktop parts can run at up to DDR3-1866. Maximum memory capacities are 32GB and 64GB for notebooks and desktops, respectively.

Llano has a total of 24 PCIe Gen 2 lanes at its disposal. Sixteen of those lanes can be used for external graphics. Four of the lanes can be used for devices that need low latency/high bandwidth access to the APU itself (e.g. Gigabit ethernet). The remaining four lanes are used to connect the APU to its sole partner in crime: the Fusion Controller Hub. 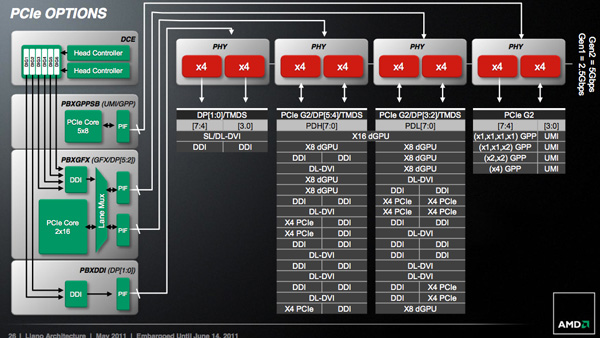 AMD is particularly proud of the display output configurations supported by Llano. The possible combinations are listed below: 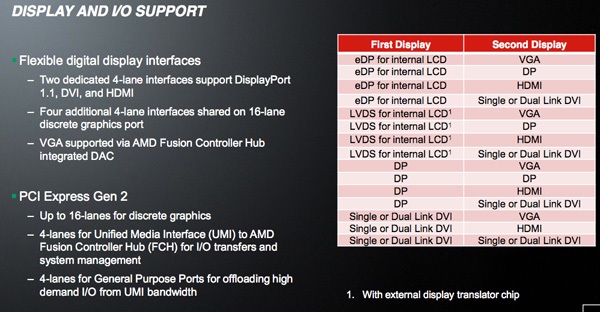 AMD will offer two Fusion Controller Hubs (FCHs) as options for Llano: A70M and A60M. The only difference between the two is in their support for USB 3.0; the A70M has four USB 3.0 ports while the A60M has none. 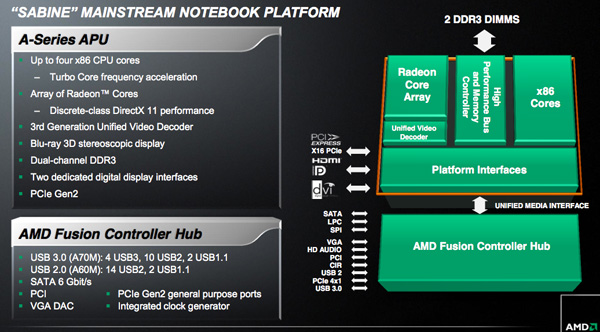