With 1.45 billion transistors on die, Llano relies on extensive power gating in order to keep things in order. The APU is split into two independent power islands: the CPU and the GPU. The memory controller and North Bridge both live on the GPU's power island. Each island has its own independent voltage source. 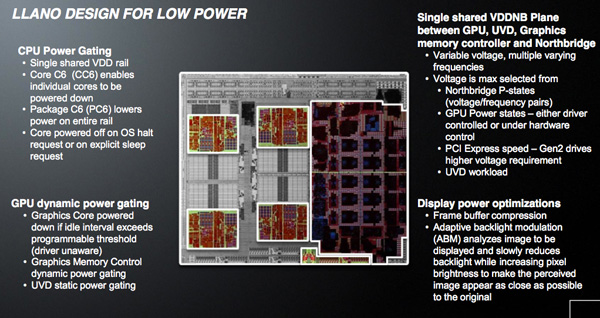 Everything from an individual CPU core to the entire GPU or virtually the entire APU package can be power gated. AMD provided photon recombination images to show the impact power gating the GPU can have on leakage current:

Although not depicted above, Llano can also fully power gate the x86 CPU cores or both the CPU and GPU if the entire APU is in a deep sleep state. Being able to completely power gate CPU cores or the GPU is an important part of enabling the next major feature of Llano: Turbo Core.

All processors whether CPUs, GPUs or APUs have to be designed to strict thermal and power limits. OEMs need to know exactly what sort of chassis they'll be able to build around these chips and as a result the chip vendors provide guidance in the form of specifications, including the chip's thermal design point (TDP).

In the old days of microprocessors things were simple. You had a single core that ran all the time and it consumed all of the available thermal budget allocated for that core. AMD and Intel eventually enabled dynamic clock frequencies which let your single core underclock itself when it wasn't being used, which helped reduce power and extend battery life. Then came the multi-core era. 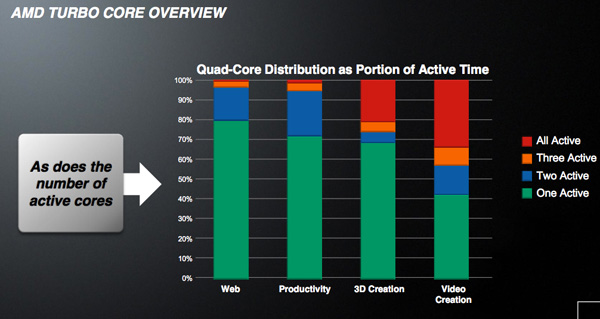 Without power gating you can never really shut off power to an idle core. The transistors aren't switching but power is still dissipated thanks to leakage current. Remember that transistors don't simply stop conducting electricity when they're off. The smaller they get, the more leaky our beloved transistors become. Power gating lets you physically block the flow of current to the transistors that are being gated, so when they're off, they're actually off. With an idle core shut off, now you have the extra TDP headroom to run any active cores at higher frequencies.

Intel does this with a technology it calls Turbo Boost. Intel looks at current draw and thermal sensors spread out all over the chip and determines when it has the available thermal headroom to turbo up any active cores. AMD implements a similar technology in Llano (and previously in their hex-core desktop parts) called Turbo Core.

I say similar but not identical because AMD's approach differs in a very important way. While Intel looks at current draw and temperature data, AMD looks at workload. Each activity within the Llano APU is assigned a certain power weight (e.g. an integer multiply is known to require a certain amount of power). Llano is aware of the operations it's currently working on and based on the weights associated with these operations it comes up with a general estimate of its power consumption on a per core basis. I mention this is an estimate because it correlates digital activity to power consumption; it doesn't actually measure power consumption. 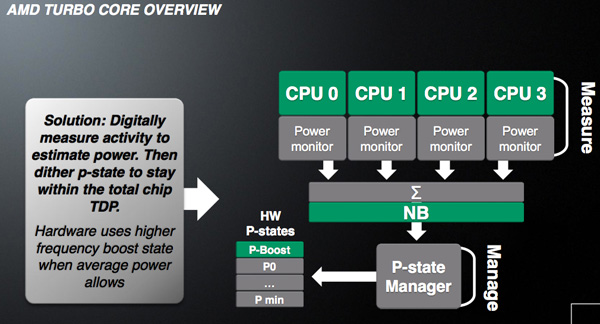 Based on the number of events and their individual weights, AMD estimates the power consumption of each core and determines how much TDP headroom exists in the system. If the OS is requesting the highest p-state from the CPU and there's available TDP headroom, Llano will turbo up any active cores up to a maximum frequency. Like Sandy Bridge, Llano is able to temporarily exceed the APU's maximum TDP if it determines that the recent history of power consumption has been low enough that it'll take a while for the APU to ramp up to any thermal limits. 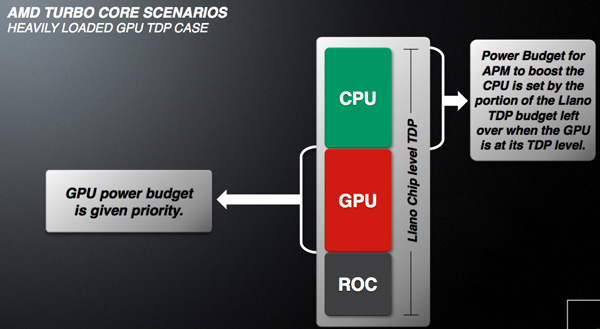 One major limit of Llano's Turbo Core is that the GPU can't turbo up in the event of the CPU cores being idle. Only the CPU cores can turbo up if they have available headroom. I suspect future versions of Llano will probably enable GPU Turbo Core as well: 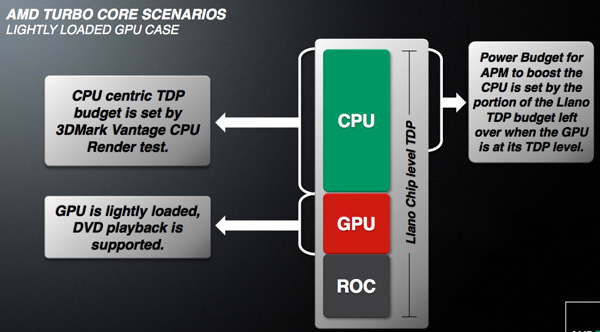 It's unclear to me at this point what shortcomings or advantages exist for AMD's Turbo Core method vs. Intel's Turbo Boost. At the bare minimum the two are finally comparable although they use different approaches to attain a similar end result. AMD doesn't yet have a method of actually displaying Turbo Core frequencies, unfortunately, so we're operating a bit blind at this point. Over time I hope to have a better idea of how AMD's solution stacks up.