Apple doesn't just use the extra chassis volume in the iMac for heat dissipation, the system also comes equipped with a single 3.5" hard drive rather than the smaller 2.5" drives you find in notebooks. With the exception of the entry level iMac which comes with a 500GB drive, the remaining iMacs ship with a 1TB hard drive. By today's standards 1TB isn't anything to be excited about, particularly if you're storing a lot of music, photos and videos. The drives are all 7200RPM and come from either Seagate or Western Digital. 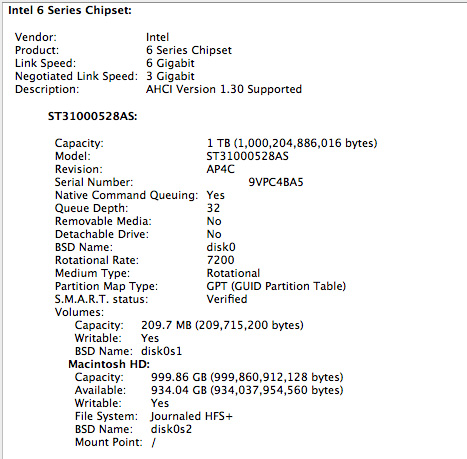 Retail drive cost is around $65 and the cost to Apple is likely even lower than that as an OEM ordering in bulk. With less than 3% of the cost of the high end 27-inch iMac being devoted to the hard drive it's clear that Apple doesn't view storage as anything other than a commodity. This philosophy extends to Apple's take on SSDs as well. While my review system didn't come with a SSD, Apple tells me that the 2011 iMacs use the same SSDs that the 2010 iMacs offered as an option (apparently a Toshiba based SSD - confirmed it's the same Toshiba SSD used in the 2011 MacBook Pro). The SSD isn't available on the $1199 iMac.

There's only one drive offered: a 256GB Apple branded drive for $500 in lieu of your internal hard drive. If you want it in addition to the 1TB hard drive it'll be $600 or $750 if paired with a 2TB hard drive. I don't have to tell you that while I believe an SSD is worth that much money, the drive Apple will sell you isn't exactly worth its upgrade cost.

While it's possible to add an SSD on your own, doing so requires a pretty lengthy teardown process. There are great tutorials online that help show you the way as well as provide you links to all additional cables that you'd need. There's no tray for the SSD to live in by default so you either have to cleverly adhere it to the inside of the chassis or order a part specifically designed to do so.

Apple opted for high quality fairly standard SATA cables for the iMac so I don't believe we'll see the compatibility issues on the iMac that we've seen in the MacBook Pro. In typical Apple fashion there are no spare power cables just laying around inside the iMac, instead you'll have to split power off from the hard drive to power both it and your aftermarket SSD. The whole process looks doable with a bit of patience and the right tools.

Apparently Apple likes to query HDD temperature quite frequently and uses that data in determining fan speed. In order to keep those requests off the SATA bus Apple supplies a custom power cable with surprisingly low gauge wires to not only power the hard drive but also return temperature data to Apple's fan controllers. The cable looks like this: 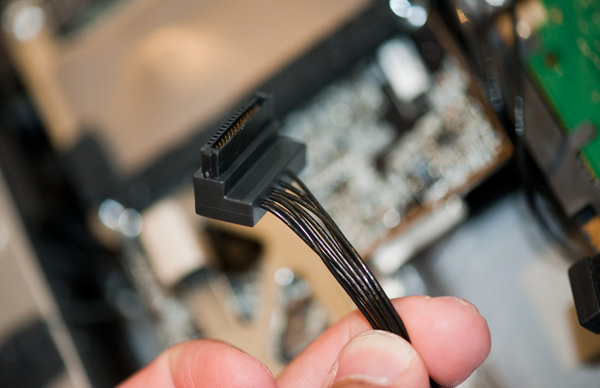 The standard SATA power cable is five pins. There's one pin for each voltage rail (3.3V, 5V and 12V) and two pins for ground. Apple's custom cable has seven pins, the remaining two are for temperature data. If you replace the iMac's internal hard drive with a drive that doesn't provide the appropriate temperature data, Apple's fan controller will go bonkers and try to cool what it assumes is an overheating drive.

When presented with this information, our own Brian Klug had a simple suggestion: short the two temperature pins to fool them into thinking all is good. It turns out that Apple provides a similar suggestion if you have a SSD-only iMac. Awesomely-named-site Hardmac.com has the scoop.

On the iMac, HDD power is provided through a proprietary connector on the motherboard. Short pins 2 and 7 (just connect the two using a simple wire) and you'll be able to run the iMac with no HDD plugged in and avoid the uber-spinning-fans. I'm guessing if you want to run with your own 3.5" drive in there that doesn't work with Apple's sensor setup simply short those two pins on the power cable itself (you'll have to tap into and modify the cable for this to work) and you should be good to go. Given that this is a review sample from Apple, and that Apple isn't too fond of me taking their review samples apart, I haven't tried the solution. But if shorting pins 2-7 on the motherboard header works, then shorting those two pins on the cable should work as well.

Now it's a pain that we even have to have this discussion, in fact it's the lack of easy upgrades that makes me so uncertain about the iMac. It's a fast machine with a great display but what happens in a couple of years when I need a faster GPU or even sooner when I want an SSD or larger HDD. At least the latter is possible.

With PCIe it's completely feasible to bring some modularity to these components. If anyone is willing to break the mold and explore something unique it's Apple, unfortunately I'm just not seeing that here.