AMD has hardly kept quiet on the CPU front these past several months. At the beginning of the year AMD put the nail in Atom's netbook coffin with the Brazos platform, and last month it announced the first shipments of Llano APUs to OEMs. Expect an official launch of Llano to follow sometime in the next two months.

AMD's focus on the mainstream echoes to a certain extent its GPU strategy: focus on the bulk of the customers first, then address the smaller high end of the market. Despite an overly controlling stance on overclocking and issues with B2 stepping 6-series chipsets, Intel's Sandy Bridge (Core ix-2xxx) dominates the high end. AMD will make a go for that market later this year with its Bulldozer architecture. It's still too early for an accurate preview of Bulldozer performance, although the time for such a thing is quickly approaching.

Until Bulldozer's unveiling, the Phenom II remains as AMD's high end platform. Today, that very platform gets a little boost. 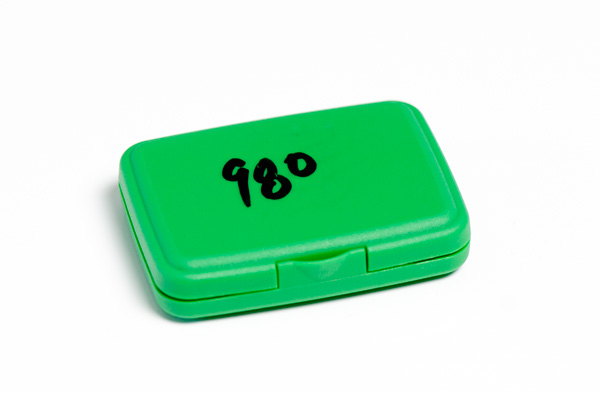 The Phenom II X4 980 Black Edition release marks a speed bump and a price drop for the quad-core Phenom II family. The 980 assumes the $195 price point, with everything else stepping down a notch in pricing:

Architecturally there are no surprises here. The 980 comes with a 6MB L3 cache shared by all of its cores and 512KB private L2s per core. The chip is built on Global Foundries' 45nm process with a 258mm^2 die size and around 758M transistors. TDP remains at 125W and the chip should work in all Socket-AM3 motherboards. 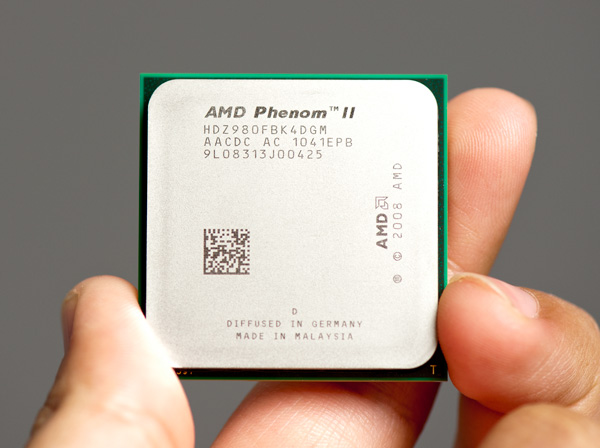 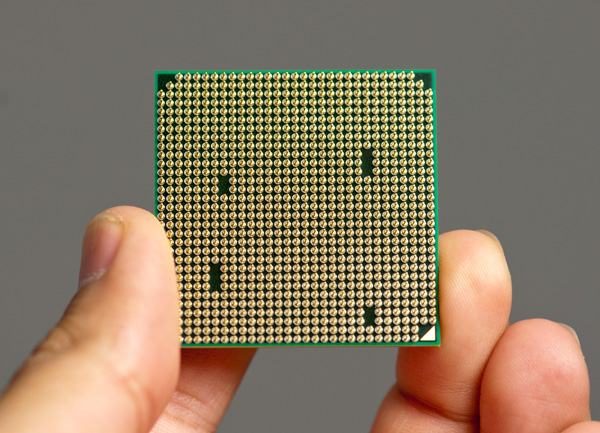 Don't expect any performance surprises here. The 980's closest competitor is Intel's Core i5 2400 a four core, four thread offering clocked at 3.1GHz by default with a 3.4GHz max turbo. Single threaded performance is clearly a win for the Core i5 2400: 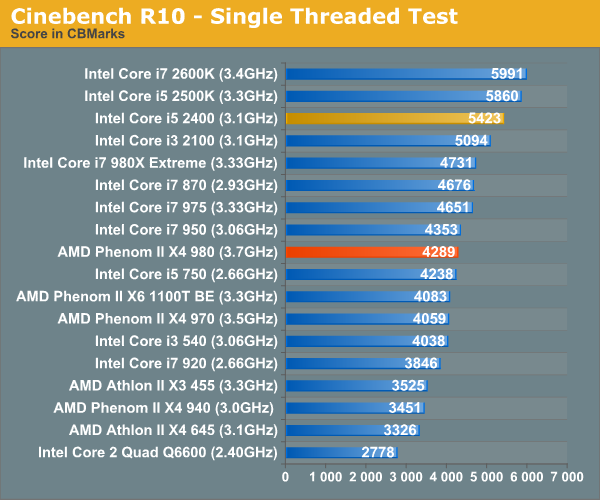 Multithreaded performance ranges from equal between the two: 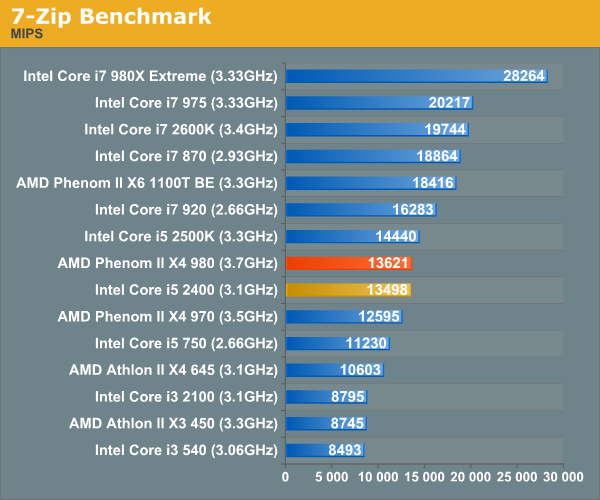 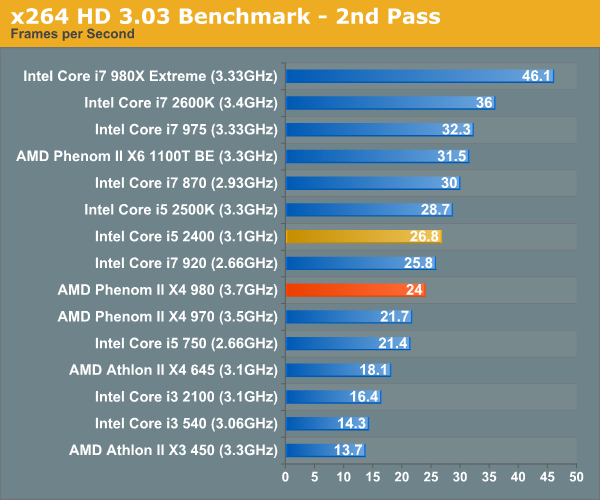 Typically the Core i5 2400 wins across the board. Load power consumption is also an advantage: 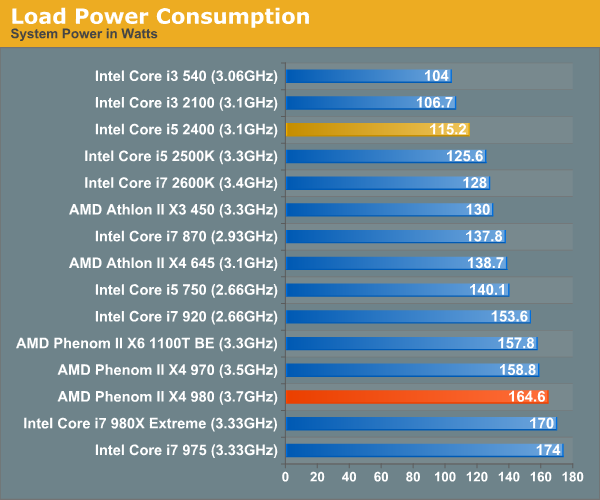 The only advantage AMD offers is a fully unlocked CPU that can be overclocked as far as physics will allow. On our sample that meant 4.2GHz with the stock cooler. Given enough voltage hitting 4GHz+ on air isn't a problem: 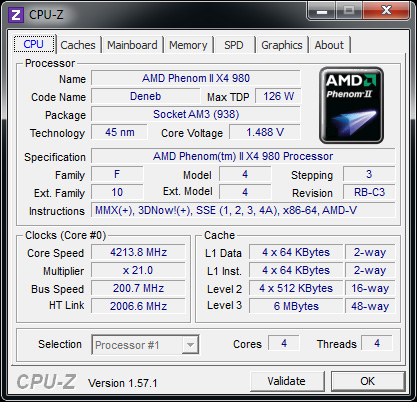 Unfortunately even while overclocked the Phenom II X4 980 can't muster enough performance to put a stock Core i5 2400 to shame: 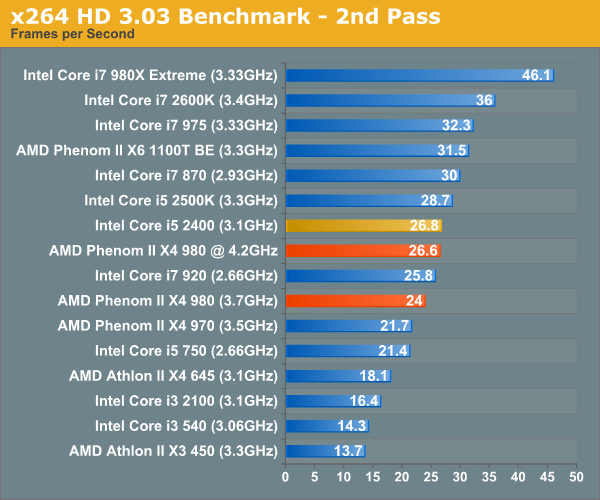 At 4.2GHz the 980 is fast enough to equal the 2400 in our x264 test and perhaps slightly surpass it in a benchmark that favors AMD's Phenom II architecture. But for the most part, even overclocked, the Phenom II X4 980 won't be worth it over Sandy Bridge.