So now we get to the numbers, and this is where some of the competing solutions will really take a beating. Let’s just cut straight to the chase and look at the graphs. We’ve highlighted the K53E in our standard bright green, with the ASUS U41JF in black, Apple's dual-core i5-2415M MBP13 in gold, and the quad-core i7-2820QM in yellow.

One interesting piece of information prior to the benchmark discussion is that despite having a theoretical maximum Turbo speed of 3.2GHz, we rarely see the i5-2520M hit that mark in testing. Using CPUID’s TMonitor utility, in the single-core Cinebench result we see both cores fluctuate between 800 to 3100MHz. It appears the Windows task scheduler isn’t quite sure how to best distribute the load, which is a common problem. However, in the multi-threaded Cinebench test the two CPU cores run at a constant 2.9GHz, as expected. 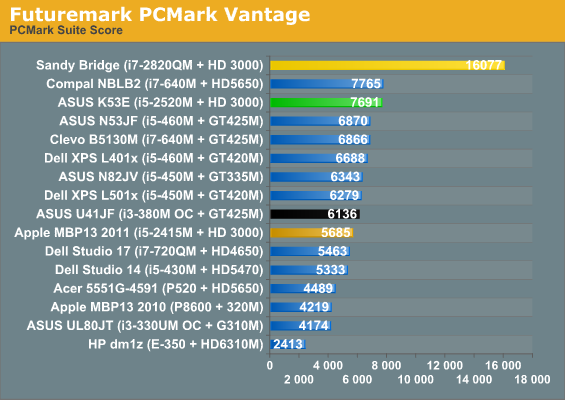 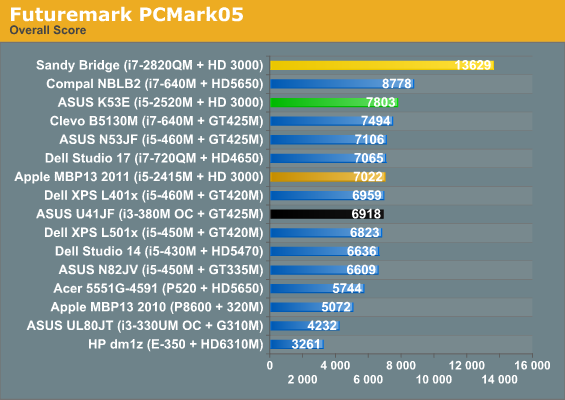 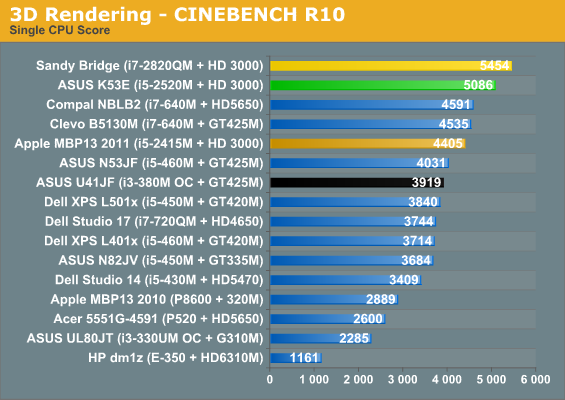 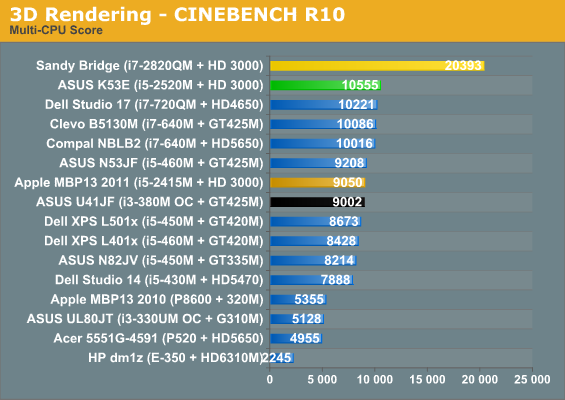 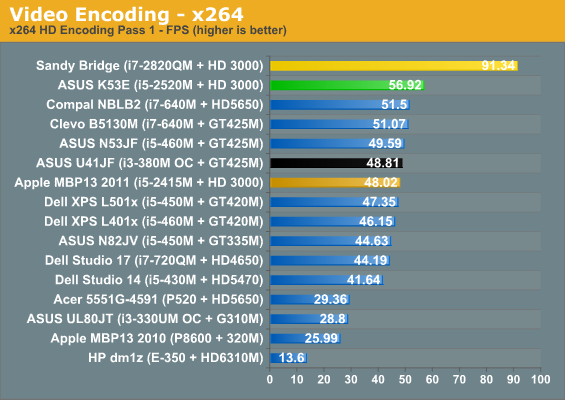 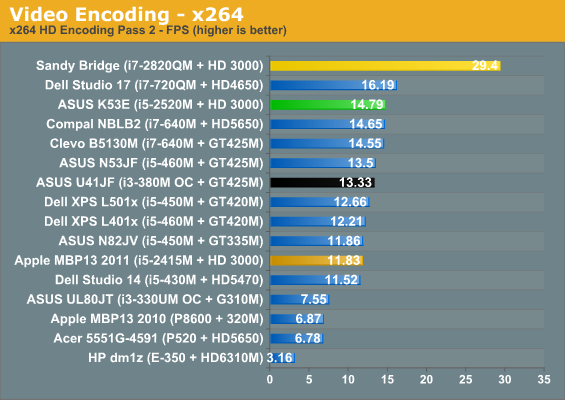 Starting with the new MBP13 comparison, the K53E with i5-2520M comes out an average of 20% faster. Some of that can be attributed to the hard drive differences, as PCMark Vantage shows Apple’s HDD choice is particularly poor, but the CPU intensive tasks are also 15 to 25% faster. It’s interesting that ASUS’ UL41JF happens to put in an overall showing in these applications that matches the MBP13, but that’s in a large part thanks to the 15% overclock. Looking at stock Arrandale CPUs, the i5-2520M turns in slightly higher performance results than the i7-640M, the highest-clocked Arrandale CPU we’ve tested. Even the old i7-720QM in the Dell Studio 17 fails to match the performance of the i5-2520M, which leads by an average of 18% in the above benchmarks (with the only loss coming in Pass 2 of x264 encoding).

Move up to quad-core SNB and an SSD, and of course the dual-core parts look a lot weaker. The i7-2820QM average lead in the above charts is 74%, but part of that is the thanks to the 104% lead in PCMark Vantage. Remove the PCMark results, though, and the 2820QM is still 65% faster than the 2520M. On the other side of the charts—literally—is AMD’s E-350. We know it’s not meant to compete with Sandy Bridge (or even Arrandale or Core 2 Duo), but keep in mind that the cheapest price for such a laptop is going to be around $450. On average, the i5-2520M lays the smack down hard and ends up roughly four times faster than an E-350. Ah, but the E-350 has a much better IGP, right? Well, maybe it’s better, but it’s certainly not faster than Intel’s HD 3000 when it’s bottlenecked by the CPU; here are some 3DMark results before we get to the games to give you an idea of how graphics performance compares. 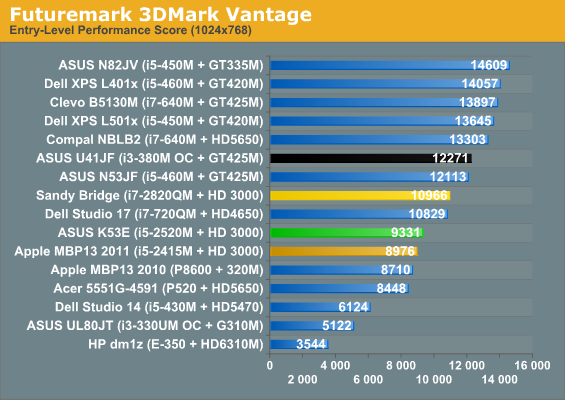 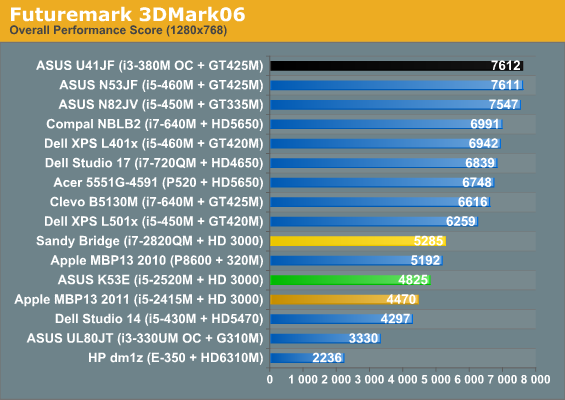 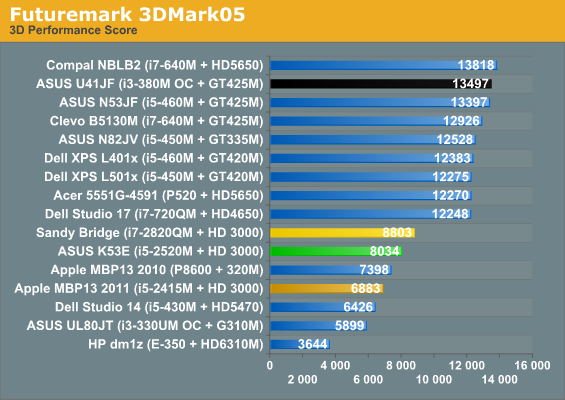 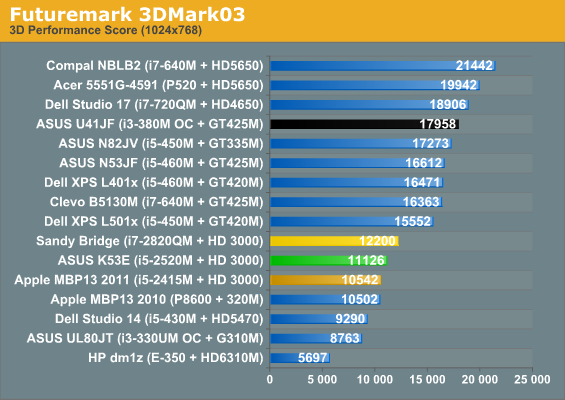 While we would never take 3DMark as the end-all, be-all of graphics performance comparisons, it does give a general idea of what we can expect. The K53E with i5-2520M turns in performance that’s 9% faster than the MBP13 on average across the four versions of 3DMark. That’s actually pretty accurate, as we’ll see in the gaming tests. Likewise, the i7-2820QM results end up being 12% faster than the 2520M, possibly from more aggressive IGP Turbo modes. Again, that matches what we’ll see in the games. On the other hand, even a middling dGPU like the GT 420M/425M still comes out 40-50% ahead of the HD 3000, and AMD’s HD 5650 is 60% faster on average.

What about AMD’s Fusion E-350 platform? If the 3DMark results hold in our actual gaming tests, Intel’s “horrible” HD 3000 IGP offers over twice the performance of the HD 6310M. In fact, even an Arrandale IGP would come within 10% of the E-350 results in 3DMark. It’s not that we love Intel or want them to pummel AMD, and we understand that the E-350 competes in a lower price bracket. Still, many people like to get carried away in discussions of how much better AMD’s graphics are compared to Intel’s IGP. That’s certainly true when you’re looking at discrete GPUs, and compatibility is still better with AMD and NVIDIA drivers, but the latest SNB IGP changed the status quo. HD 3000 works in about 90% of games (roughly estimating), performs well enough to be playable in about 80% of titles, posts scores that are competitive with HD 5470 and GT 320M (and often twice what the current Brazos can achieve), and you get it for free with any 2nd Gen Core i-series CPU. As a friend of mine is fond of saying, it’s hard to compete with “free”.