Later this morning NVIDIA will be releasing the first public beta of their 270 series GeForce drivers. NVIDIA is promising the usual spate of performance improvements that come from a new driver branch; notable improvements include Dragon Age 2 given the game’s poor performance on NVIDIA’s existing drivers, and 3D Vision/3D Vision Surround performance for some games. Of course driver performance gains rarely match what’s advertised, so your mileage may vary.

The more important bit of news coming with the release 270 drivers is that NVIDIA is going to be including a driver update notification service. Currently NVIDIA has a true auto update service for Optimus but nothing for the rest of their drivers; and meanwhile AMD launched their own notification service with the Catalyst 11.4 preview drivers earlier this month.

Unlike the Optimus service – which is a full auto update service – NVIDIA’s GeForce driver update service will be a notification service; driver updates are just a wee bit bigger and are more likely to go wrong than a simple profile update. As with the AMD’s notification service this is going to be enabled by default, as users most likely to encounter problems with out of date drivers are the most likely to pass over the option to enable driver update notifications. Meanwhile for power users the service will also have an option to poll for beta drivers as frequently as once an hour for the truly cutting edge. Notably, NVIDIA is going to be directing users to their download page rather than directly downloading the newest drivers, as they want users to be able to read the release notes first. 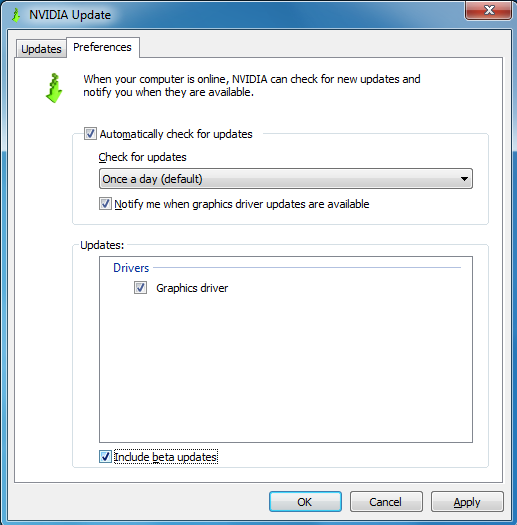 As with AMD's notification service we're a bit worried about this becoming another source of update spam for most users, but we'll see how things go. NVIDIA's less frequent WHQL release schedule should result in fewer updates over the period of a year than AMD's schedule, and as a result fewer update notifications. Meanwhile NVIDIA has not announced a release date for WHQL drivers, however we'd expect it to occur in April, meaning both NVIDIA and AMD will begin including update notifications with their public WHQL drivers at approximately the same time.