With the potential for higher power draw, battery life on these new systems has the chance to be really, really bad. In reality it breaks down like this: light usage cases are equal if not better than last year's model. Apple makes up for the higher core count of the 15-inch MBP by capping turbo speeds and being very good about allowing the CPU to go into deep sleep states under OS X. On top of that, Sandy Bridge is a very efficient microarchitecture that manages to get work done quicker than Arrandale and get to sleep faster. 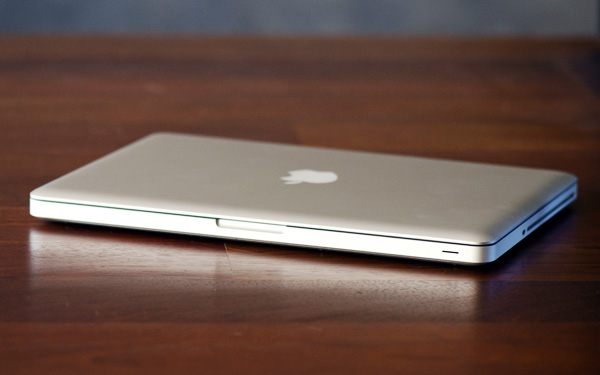 Heavy usage cases however can easily be worse than last year's model, specifically with the 15 and 17-inch systems. The new 13 is a mixed bag. Core 2 was a pretty low power architecture, beating its battery life will be difficult. The only scenario our battery life tests don't duplicate is one where workload scales with performance. Right now all of our tests are fixed workloads: web pages may render quicker, but you'll still be idle for the same amount of time regardless of system. Video frames may decode quicker, but they'll still play back at the same 24 fps. If you use the additional performance of these systems to do more then you'll likely see even worse battery life (see the power numbers on the previous page).

Here we're simply listing to MP3s in iTunes on repeat while browsing through a series of webpages with no flash on them. Each page forwards on to the next in the series after 20 seconds.

The display is kept at 50% brightness, all screen savers are disabled, but the hard drive is allowed to go to sleep if there's no disk activity. The wireless connection is enabled and connected to a local access point less than 20 feet away. This test represents the longest battery life you can achieve on the platform while doing minimal work. The results here are comparable to what you'd see typing a document in TextEdit or reading documents. 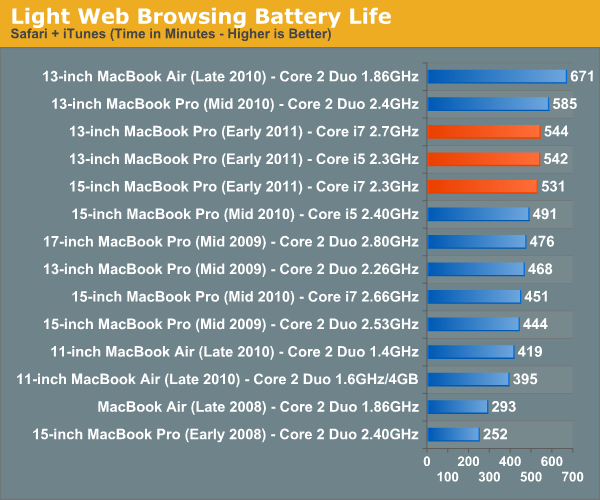 For the 15-inch model battery life has doubled since 2008. Even compared to last year's model Apple has actually improved idle/light usage battery life by 8%. With 9 hours of battery life I can confirm that if you're just using the 15-inch MBP as a glorified typewriter this is what you'll see. It's a great combination of a system that has performance on tap but the battery life to last you if you just need to do some writing.

The 13-inch MacBook Pro actually takes a step back compared to last year's model but it's still the Mac with the 3rd longest battery life.

Under Windows 7 there's no option to use the iGPU, the 15 and 17-inch MacBook Pros default to their dGPU. As we already showed, simply enabling the dGPU hurts battery life. What about the move to Windows 7 on top of that? To find out I ran our light web browsing battery life test under Windows 7. I subbed in IE8 and Windows Media Player for Safari and iTunes and otherwise ran with similar settings as our Mac test: 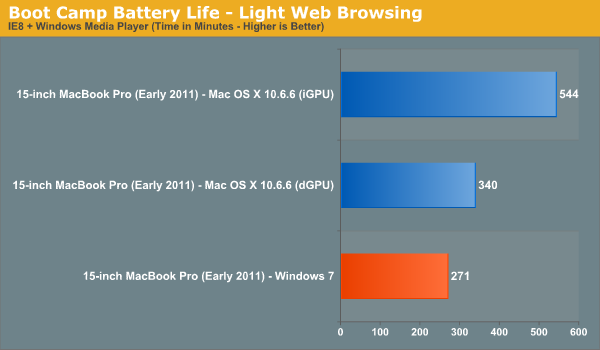 Compared to OS X with the dGPU enabled, Windows 7 delivers 20% lower battery life. The bigger penalty however is the forced dGPU usage under Windows. If you're planning on using the new 15-inch MBP as a Windows notebook, don't expect to get anywhere near the battery life that is promised under OS X.

As always, the display is set to 50% brightness, audio at two bars, screensaver disabled and the hard drive is allowed to go to sleep if idle. The wireless connection is enabled and connected to a local access point less than 20 feet away. 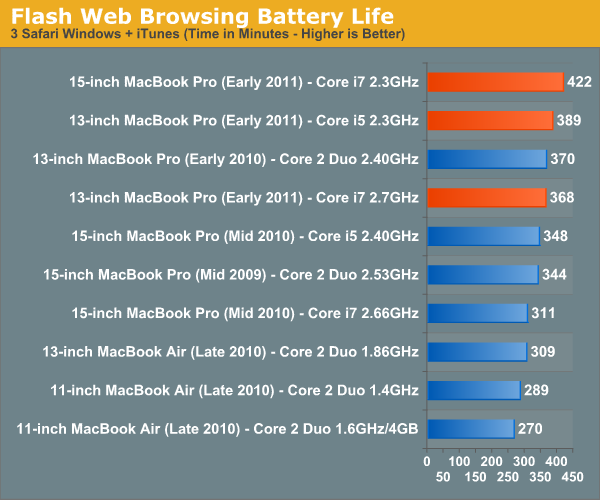 Turn Flash on and up the intensity of the workload and the numbers get a lot more reasonable. The new 15-inch MacBook Pro leads the pack with 7 hours of battery life. You'll note that this is exactly what Apple promises on its website. At 7 hours this is also a 20% improvement over last year's model. Other than OS/optimization differences the only explanation I have here is that Sandy Bridge provides a sufficient enough increase in CPU performance to render a page and flash ads get to sleep quicker compared to Arrandale. Another contributing factor is the new 32nm iGPU which is active full-time under Safari. The GPU alone is probably a bit more efficient at rendering flash than last year's GeForce GT 330M.

The 13-inch model actually equals its predecessor. I suspect the Core 2 Duo is still a lower power CPU under a moderate load.

I ripped The Dark Knight to XviD and played it back continuously in QuickTime X with Perian installed. For this test the display was set to full brightess and audio was set at two bars below maximum. Once more the hard drive was allowed to go to sleep if it was idle. The AirPort (wireless LAN) was enabled and connected to a local access point less than 20 feet away. 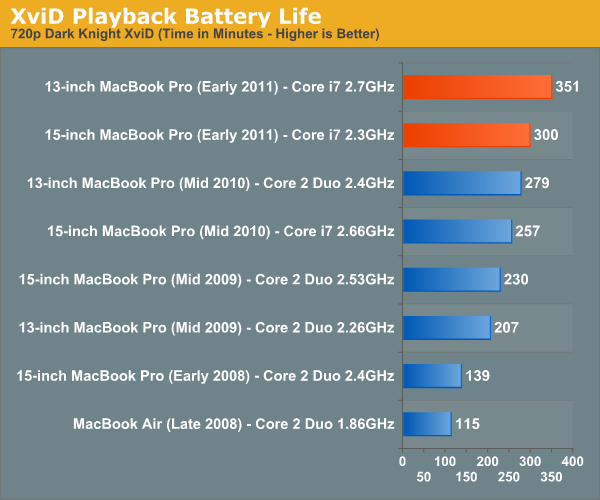 Our final battery life test is the worst case scenario. In this test we have three open Safari windows, each browsing a set of web pages with between 1—4 flash ads per page, at the same time. We're also playing an XviD video in a window all while downloading files from a server at approximately 500KB/s. 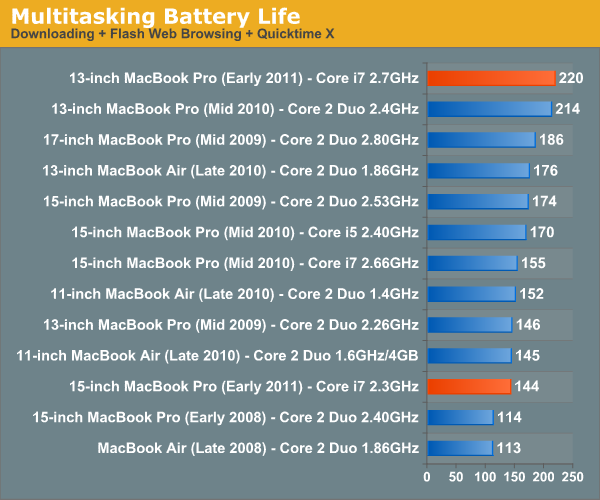 I mentioned earlier that the new 15-inch MBP has the potential to have much worse battery life given that it has twice the cores of its predecessor. Our multitasking battery life test gives you a little indication of that. At 144 minutes the new 15 lasts just under 2.5 hours here. It's only a slight reduction compared to last year's model but that's only because the workload isn't scaled up at all. OS X is likely scheduling work here across all four cores rather than just two in last year's model, driving up power consumption and decreasing battery life ever so slightly.

The new 13-inch on the other hand is pretty sweet. At 3.66 hours it's the new king of our multitasking battery life test, and it's even a slight improvement compared to the 2010 version.

Just playing back movies on the new SNB notebooks is an improvement on both models. The new 15 manages 5 hours while the new 13 is good for almost 6 hours of battery life.

Overall I'd say the battery life story of the new MacBook Pros is a mixed bag. Under light to moderate workloads the 15-inch will likely do better than the 2010 15-inch MBP, while the 13-inch is roughly the same as its predecessor. It's only under heavy use that the new 15-inch will actually do worse than last year's model. You will have to keep an eye on what you're doing with the machine because the new 15-inch MBP has the ability to use a lot more power than last year's model. The bigger issue actually has to do with the dGPU. If you use Chrome or any of the other applications that will trigger the dGPU to turn on, kiss your battery life goodbye. Even light usage suffers if your discrete GPU is active.

The new 13 is a bit less finicky. It's either going to offer you similar or better battery life than last year's model.