For our performance comparison I actually dusted off some of our 2008 8-core Mac Pro data just to show you exactly how close to a high end desktop the new quad-core MacBook Pro has come. Note that we only have comparative data for a few benchmarks so you may see the Mac Pro disappear from a few charts.

Keep in mind that the Mac Pro numbers are taken with a 3.5" hard drive (vs. the 2.5" HDD in the MBP). The big difference however is microprocessor architecture. In 2008 the Mac Pro was still running Core 2 based CPUs, while Sandy Bridge is two tocks away. What the new MBPs lack in TDP headroom and core count, they can make up for in clock speed. The result is that for the first time since I've been reviewing Apple hardware we have portable Macs that can truly hang with their desktop brethren (with some caveats of course). In order to truly bridge the mobile/desktop gap you definitely need an SSD; a 2.5" hard drive just isn't going to cut it. The Mac Pro still has a pure core count advantage. The reason I feel like the mobile/desktop gap has narrowed is because while I feel that there is a general performance benefit when going from 2 to 4 cores, it's far more difficult to find applications or usage models that take advantage of 8 or more cores.

The gap will grow once more as the iMac and Mac Pro get updated with Sandy Bridge hardware later this year, but I suspect that for even desktop users a 15-inch MacBook Pro paired with an external display may be near perfect. I believe this is a big reason for pushing Thunderbolt in this generation. While the standard may not really take off until next year, the new 15-inch MBP is definitely built for desktop replacement usage models and for that to work without sacrifice you need high speed external storage. 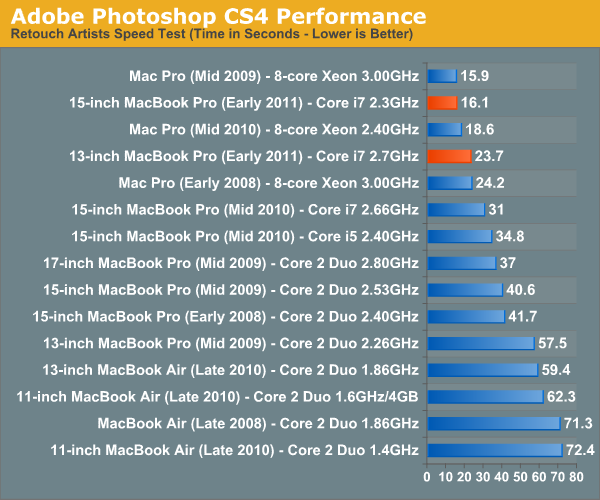 Photoshop performance is just amazing on the new systems. The high end 15-inch MacBook Pro is actually faster than last year's 8-core Mac Pro. Of course this is because Photoshop doesn't scale perfectly with core count but it just shows you just how powerful these new quad-core CPUs are.

Owners of last year's 13-inch MBP will notice that the new high end 13-inch can run through our CS4 test in roughly half the time. The performance improvement is of course exaggerated because Apple kept the 13 on Core 2 for longer than it should have, but what's important is that the new 13 is really fast.

If you do a lot of Photoshop work, the Sandy Bridge upgrade will be worth it. 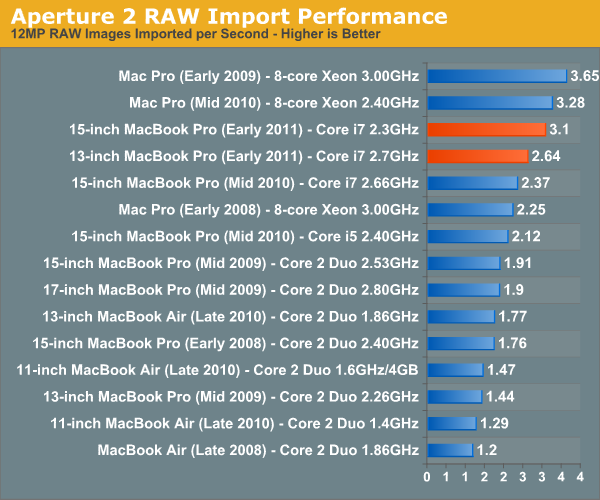 Aperture performance is similarly class leading. Here the 2010 Mac Pro actually outperforms the high end 15 by around 6% but the fact that we can even mention the two in the same sentence is huge.

The new 13 is still really quick, itself faster than a Mac Pro from as recently as 2008 in this test. 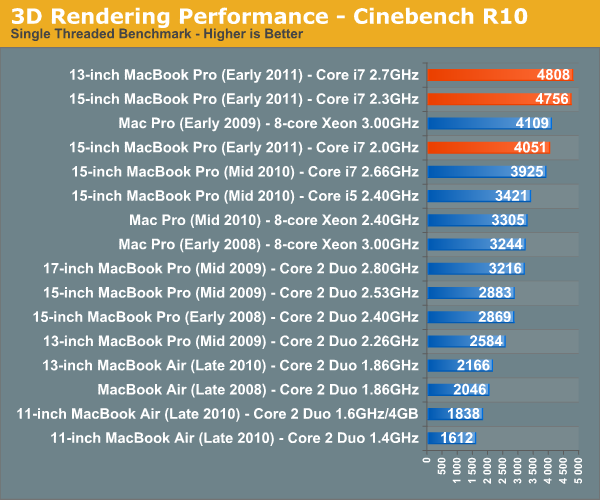 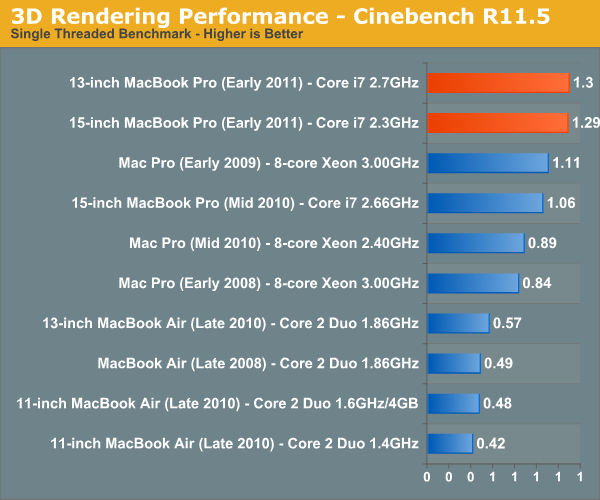 You'll notice that the 13-inch 2.7GHz MBP has a bit of an edge compared to the 15-inch 2.3GHz system here. Although both chips can technically turbo up to 3.4GHz with only one core active, Apple seems to limit the 13-inch dual-core less. As a result it will sometimes have higher single threaded performance than the 15. I noticed this in actual usage as well. The advantage is very subtle and really only visible if you do a side to side comparison however. 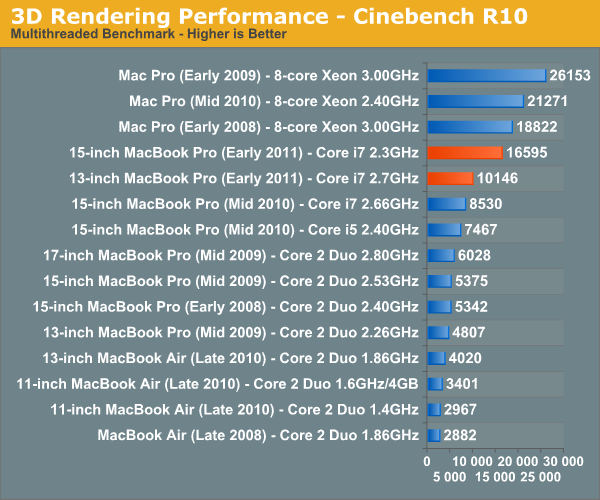 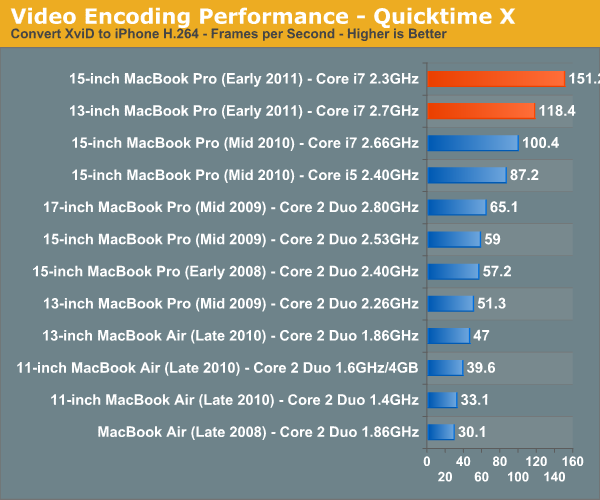 Despite missing Quick Sync support, the 2011 MacBook Pros do very well in our video transcoding tests. If Apple does get around to enabling Quick Sync you can expect the performance advantage to grow even more.