The majority of the CDMA iPhone story is one of network-related changes, and first up is an entirely different baseband. The UMTS iPhone 4 uses the Infineon X-Gold 618 baseband, which supports HSDPA 7.2 Mbps and HSUPA 2.9 Mbps. By contrast, the CDMA iPhone uses the Qualcomm MDM6600, which is a dual-mode GSM/UMTS and CDMA2000-1xRTT/EVDO part capable of even doing HSDPA 14.4 on the downlink. The Verizon iPhone tunes 800/1900 MHz CDMA2000-1xEVDO Rev.A for peak throughput of 3.1 Mbps down, 1.8 Mbps up. The MDM6600 supports Rev.B speeds, but it's unlikely we'll see carriers pursue 3GPP2 tech any longer, besides a possible 1xAdvanced rollout.

Though the baseband supports dual mode operation, upon looking at more of the CDMA iPhone disassembled, it's quickly apparent why that isn't put into use. There simply isn't space for the required power amps as the mainboard is organized right now. Though there's definitely space picked up from losing the SIM slot (which, as an aside, explains why Apple seemed keen on losing SIMs entirely - it's starting to become a huge chunk of real-estate), but the MDM6600 is simply larger than the Infineon X-Gold 618. Unless you can get in there and add both the signaling for the SIM and necessary RF components, there's no way the CDMA iPhone is becoming dual-mode anytime soon. 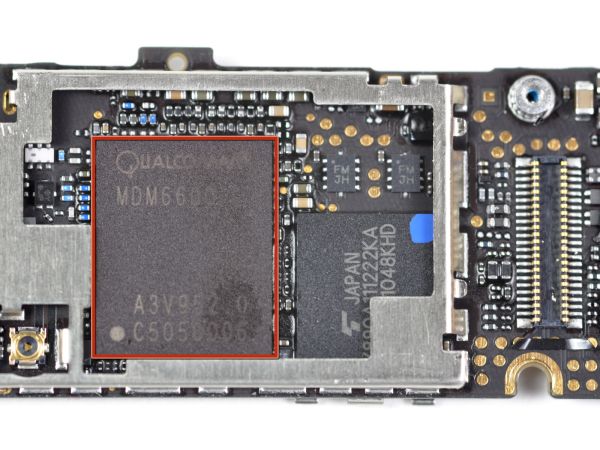 Last time we visited the iPhone 4, a large part of our focus centered on getting to the bottom of the signal attenuation issue. With the UMTS iPhone 4, if you touched the exposed stainless steel band in the wrong place, the antenna would capacitively de-tune, signal strength and quality would both fade, calls and data sessions could potentially drop, and all hell broke loose accordingly.

Most of the antenna problem is actually mitigated in the CDMA iPhone 4. How? Antenna diversity.

Antenna diversity can be implemented a few different ways. You can switch between two different antennas quickly depending on which is experiencing temporary fade (from a hand touching it), or you can do some averaging and hope that even with significant fade on one antenna, there's still enough signal to keep you above cutoff. It's not clear what Apple has implemented on the CDMA iPhone 4, but as we'll show later, it definitely mitigates the problem in most cases. Diversity won't magically give you better signal strength (nor will it save you if you cover both), but it will help keep SNR and overall link quality high. The MDM6600 has full CDMA and WCDMA RF receive diversity support with the inclusion of an external switch. It's not entirely certain what part is the switch, but it's definitely there.

How else do we know that the CDMA iPhone 4 has diversity? It's part of Verizon's own specifications for what devices need to have to attach to their network. Buried in the required open alliance spec datasheets is the following:

There we have it, if you want a device approved for Verizon's EVDO network, you need receive diversity.

Inside, the CDMA iPhone has a substantially changed antenna and RF design to accommodate that diversity. There are two cellular antennas in the CDMA version, as opposed to one in the UMTS version. With the phone facing up, the first cellular antenna consists of the new strip at the very top. The second is the strip running from the bottom left, across the bottom, and up the right side of the phone. The far left side with volume buttons and the vibrate switch is part of the WiFi and Bluetooth antenna. 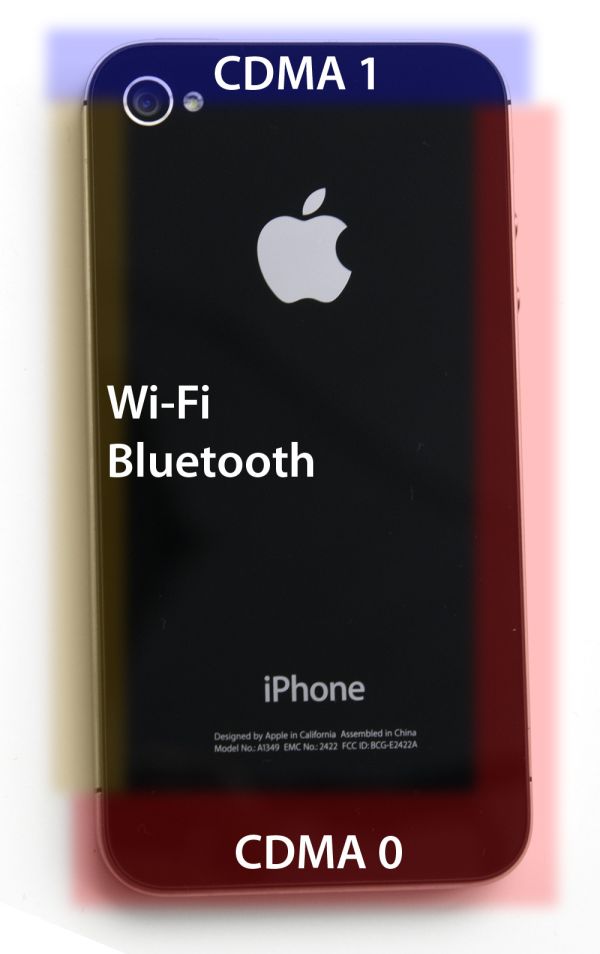 Inspecting the RF path itself, we can see that the bottom acoustic module and cellular feed line is relatively unchanged. It snakes across from the region near the baseband to the attach point right next to the black strip. This connector across the base isn't an antenna, just a feed line. This is the sole cellular antenna in the UMTS iPhone 4, and is essentially unchanged. We didn't take apart an iPhone, these are just photos from the FCC. 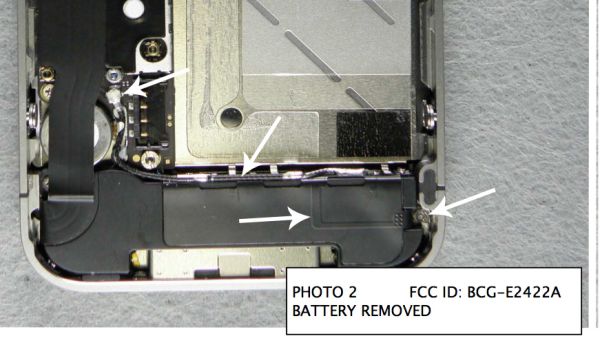 What is changed is the new second cellular antenna. There's another cable which runs on the underside from near the baseband, straight up the length of the entire main PCB. It snakes around a screw, continues up, and then attaches to another UFL connector at the top. The trace is easily followed up to a gold contact point which presses against a mating point on the top strip. This is the second cellular antenna. 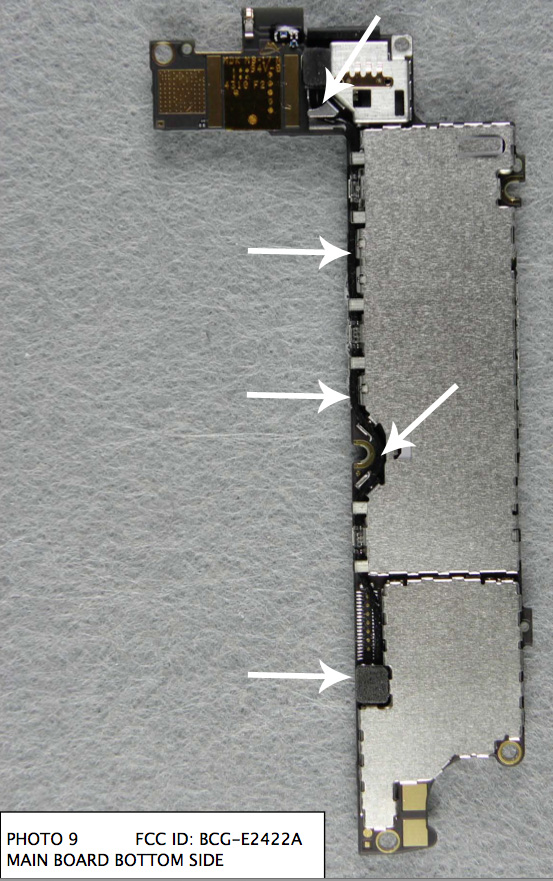 The other interesting aspect is the WiFi/BT 2.4 GHz antenna. Broadcom is still in the CDMA iPhone doing the heavy lifting for 802.11b/g/n and Bluetooth. There's another connector right next to the BT/WiFi module which leads to a cable that flexes around, then connects to the final strip. 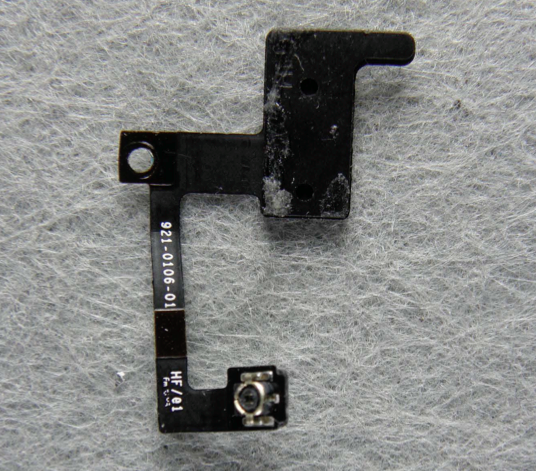 There's a beefy flex region which could be a ground plane, and then the screw connector for that last strip.

So there's a lot that's been changed between the UMTS and CDMA iPhone 4 internally - how much of a difference does it actually make in practice? It's actually pretty substantial.

When Anand got time with the CDMA iPhone 4 at the announce event, he snapped a number of photos of field test which at the time worked perfectly. Back then, the CDMA iPhone 4 was running iOS 4.2.5, and there were fields like these visible: 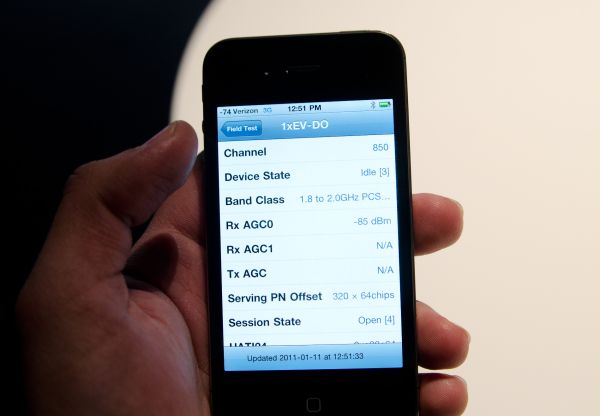 Look at Rx AGC0 and AGC1, and the accompanying signal fields. There's Rx diversity again, by the way.

I was definitely excited to see that things were going to be relatively open once more, which would make it easy to fully appreciate the design changes and just how much better everything is. Right before launch however, Apple pushed iOS 4.2.6 live which did more than just ensure the hotspot feature reports data correctly - it removed field test. Yeah, we're right back to how things were when iOS 4.0 launched and everything was wrapped in enigma.

It's a shame that field test is gone because it looked very comprehensive. I hope it mysteriously reappears randomly just like it did in iOS 4.2. Its absence right now isn't a big deal though, because we can still get numerical values by doing the same thing we did last time we were in this situation. There's no jailbreaking involved, either. It still works, and we can still read numerical values (in dBm) out. 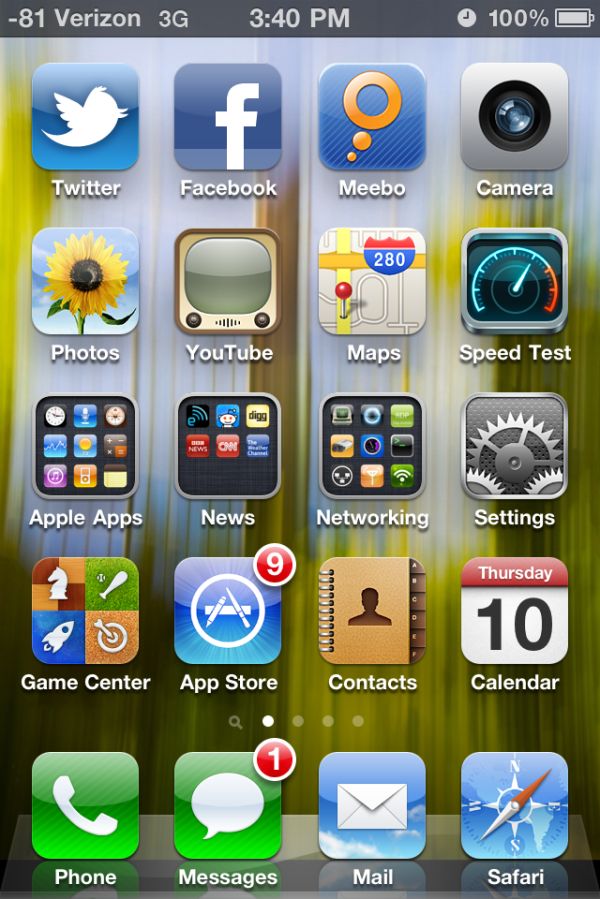 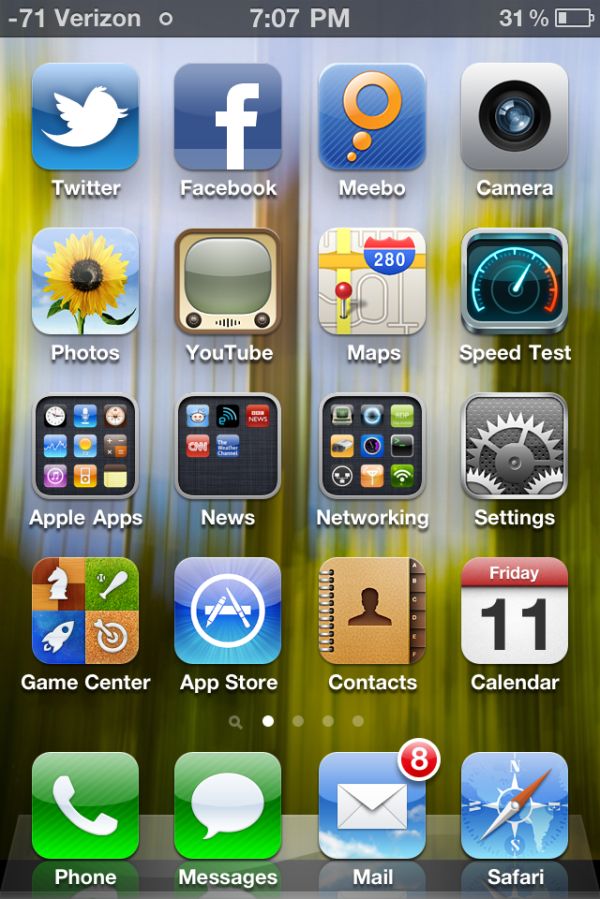 Note "3G" for EVDO data, "o" for 1xRTT which was previously reserved for GPRS

From playing around it's obvious that the measurement corresponds to 3G EVDO and not 1xRTT. Historically all phones on Verizon used to show EVDO and 1x signal side by side, which is honestly the right way of doing things - they're different channels, often on different bands, with different tolerances. Having good 3G EVDO signal doesn't imply good calling area at all, but Android makes the same mistake, and we can only really fight so many battles.

Another interesting bit is that the signal status icon shows 3G for EVDO, and the circle once reserved for GPRS for 1xRTT data. That's a bit harsh considering how glacially slow GPRS is, 1xRTT is more comparable to EDGE, but I guess having consistent iconography does make sense.

Held very tightly in true death-grip fashion, the signal drop is around 16 dB, which is right in the neighborhood of every other smartphone we've tested. Hold a little lighter, and it drops down to around 15 dB. Toss a case on there, and obviously attenuation is way lower at around 9 dB. Death grip is essentially mitigated, and the attenuation when held is now comparable to other smartphones. What we're measuring, of course, is just the numerical signal strength being reported.

There's still a way to make signal drop dramatically - cover both antennas. I call this move the double-fist, since it literally requires you to cup both the top and bottom of the phone like some sort of deranged squirrel. You could try and argue that this is still sort of like deathgrip, but it's in no way a natural way of holding the phone, ever. To be thorough, I tested this position and found that I could cause a drop of around 21 dB doing my absolute best to cover the top, bottom, and side with my hands. This is the absolute worst case possible, and if you're seriously using two hands, you're purposefully inducing attenuation. Even with it gripped like this, I have yet to make any calls or data sessions stop.

Death grip is essentially mitigated. I feel completely confident using the CDMA iPhone 4 without a case, and did so for the duration of all this testing without once dropping off the network. Getting a case still makes sense, but using the phone without one is no longer something that will dramatically affect phone usability.

Of course, the WiFi antenna is tweaked slightly as well, though both iPhone 4 versions use the same 802.11b/g/n and Bluetooth stack. I spent a lot of time comparing performance around the house and found that the difference between the two is nearly indistinguishable.

After letting both indicators settle, the reported WiFi RSSI on the CDMA iPhone was always within 3 dB of the GSM/UMTS iPhone 4. In the photos above, that's the set of numbers after the carrier string (-76 on both of these). Wireless range before falling off  the network was nearly identical as well, as expected. It's obvious to me that a lot was done to keep things comparable. They both use the strip with the volume buttons and vibrate switch.

GPS is no longer being handled by a discrete single-chip solution from Broadcom (the GSM/UMTS iPhone used a BCM4750 for A-GPS). Instead, the CDMA iPhone 4 uses the integrated A-GPS on the Qualcomm MDM6600.

I set out to find whether performance was any different, and discovered that the CDMA iPhone has slightly better GPS accuracy and tracking. The difference isn't substantial, but the CDMA iPhone 4 routinely presents a smaller blue circle and better reflects actual position when given the same swath of open sky as the GSM/UMTS iPhone 4. Fix times between the two are equally speedy and indistinguishable.

I put both phones face-up on my dashboard and went driving around for a considerable time, long enough to let both get good quality 3D GPS fixes. Surprisingly enough, the CDMA iPhone had much better precision and accuracy, and consistently better tracking compared to the GSM/UMTS version. I recorded a short video showing the differences, please excuse the vibration.

From an RF perspective, it's hard to argue that the CDMA iPhone isn't superior. Moreover, it'd be nice to see the next GSM/UMTS iPhone also reflect some of the numerous improvements in the CDMA version, including receive diversity and better GPS.