With the 6800 series AMD introduced Morphological Anti-Aliasing (MLAA), a low-complexity post-processing anti-aliasing filter. As a post-processing filter it worked with a wide variety of games and APIs, and in most cases the performance overhead was not very severe. However it’s not the only new anti-aliasing mode that AMD has been working on.

New with the 6900 series is a mode AMD is calling Enhanced Quality Anti-Aliasing. If you recall NVIDIA’s Coverage Sample Anti-Aliasing (CSAA) introduced with the GeForce 8800GTX, then all of this should sound quite familiar – in fact it’s basically the same thing.

Under traditional MSAA, for a pixel covered by 2 or more triangles/fragments, 2, 4, or 8 subpixel samples are taken to determine what the final pixel should be. In the process the color of the triangle and the Z/depth of the triangle are both sampled and stored, and at the end of the process the results are blended together to determine the final pixel value. This process works well for resolving aliasing along polygon edges at a fraction of the cost of true super sampling, but it’s still expensive. Collecting and storing the Z and color values requires extra memory to store the values and extra memory bandwidth to work with the values. Ultimately while we need enough samples to determine colors of the involved triangles, we do not always need a great deal of them. With a few color/Z samples we have all of the color data we need in most cases, however the “hard” part of anti-aliasing becomes what the proper blending of color values should be. 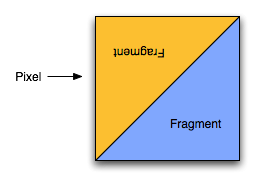 Thus we have EQAA, a compromise on the idea. Color/Z samples are expensive, but just checking if a triangle covers part of a subpixel is very cheap. If we have enough color/Z samples to get the necessary color information, then just doing additional simple subpixel coverage checks would allow us better determine what percentage of a pixel is covered by a given polygon, which we can then use to blend colors in a more accurate fashion. For example with 4x MSAA we can only determine if a pixel is 0/25/50/75/100 percent covered by a triangle, but with 4x EQAA where we take 4 color samples and then 4 additional coverage-only samples, we can determine blending values down to 0/12/25/37/50/62/75/87/100 percent coverage, the same amount of accuracy as using 8x MSAA. Thus in the right situation we can have quality similar to 8x MSAA for only a little over 4x MSAA’s cost.

While NVIDIA has had the ability to take separate coverage samples since G80, AMD has not had this ability until now. With the 6900 hardware their ROPs finally gain this ability.

Beyond that, AMD and NVIDIA’s implementations are nearly identical except for the naming convention. Both can take a number of coverage samples independent of the color/Z samples based on the setting used; the only notable difference we’re aware of is that like AMD’s other AA modes, their EQAA mode can be programmed to use a custom sample pattern.

As is the case with NVIDIA’s CSAA, AMD’s EQAA mode is available to DirectX applications or can be forced through the drivers. DirectX applications can set it through the Multisample Quality attribute, which is usually abstracted to list the vendor’s name for the mode in a game’s UI. Otherwise it can be forced via the Catalyst Control Center, either by forcing an AA mode, or as is the case with NVIDIA, enhancing the AA mode by letting the game set the AA mode while the driver overrides the game and specifies different Multisample Quality attribute. Thus the “enhance application settings” AA mode is new to AMD with the 6900 series. 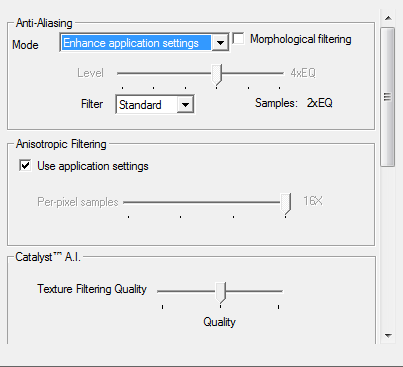 To be honest we’re a bit ruffled by the naming choice. True, NVIDIA did go and have to pick daft names for their CSAA modes (when is 8x not 8 sample MSAA?), but ultimately CSAA and EQAA are virtually identical. NVIDIA has a 4 year lead on AMD here, and we’d just as well use NVIDIA’s naming conventions for consistency. Instead we have the following.