Now that we’ve finally looked at what makes the 6900 series tick, let’s look at the cards themselves.

If you’re familiar with the 6800 series, then the 6900 series is nearly identical. For our reference cards AMD is using the same style they used for the 6800 cards, utilizing a completely shrouded and squared off design. Furthermore unlike the 5800 series AMD is utilizing the same cooler/PCB/layout for both the 6970 and 6950, meaning virtually everything we have to say about one card applies to the other as well. In this case we’ll be using the 6970 as our point of reference. 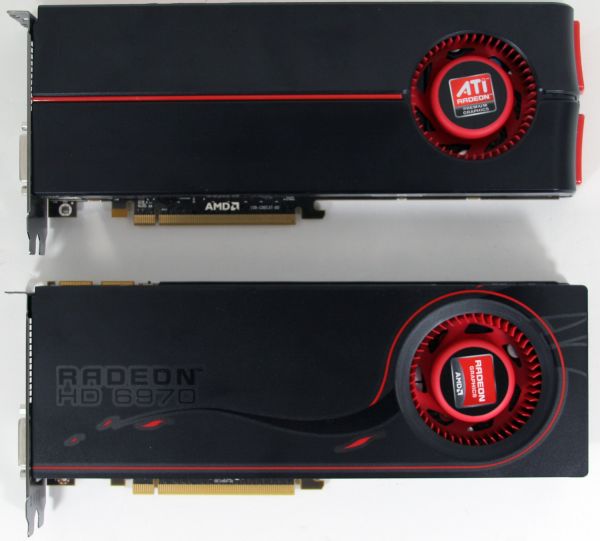 Cracking open the 6970 we find the PCB with the Cayman GPU at the center in all its 389mm2 glory. Around it are 8 2Gb Hynix GDDR5 chips, rated for 6Gbps, 0.5Gbps higher than what the card actually runs at. As we’ve said before the hardest part about using GDDR5 at high speeds is the complexity of building a good memory bus, and this continues to be the case here. AMD has made progress on getting GDDR5 speeds up to 5.5Gbps primarily through better PCB designs, but it looks like hitting 6Gbps and beyond is going to be impractical, at least for a 256bit bus design. Ultimately GDDR5 was supposed to top out at 7Gbps, but with the troubles both AMD and NVIDIA have had, we don’t expect anyone will ever reach it. 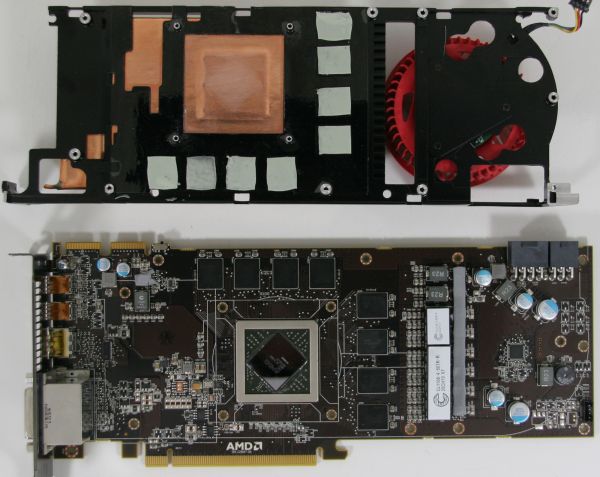 Moving on to the cooling apparatus, vapor chamber coolers are clearly in vogue this year. AMD already used a vapor chamber last year on the dual-GPU 5970, while this year both AMD and NVIDIA are using them on their high-end single-GPU products. Compared to a more traditional heatpipe cooler, a vapor chamber cooler is both more efficient than a heatpipe cooler and easier to build in to a design as there’s no need to worry about where to route the heatpipes. Meanwhile airflow is provided by a blower at the rear of the card; compared to the 5870 the blower on the 6970 is just a bit bigger, a fair consideration given that the 6970 is a hotter card. Interestingly in spite of the higher TDP AMD has still been able to hold on to the half-height exhaust port at the front of the card.

As for I/O we’re looking at AMD’s new port layout as seen on the 6800 series: 2x DVI, 1x HDMI 1.4, and 2x mini-DP. All together the 6970 can drive up to 6 monitors through the use of the mini-DP ports and a MST hub. Compared to the 5800 series the DVI-type ports have a few more restrictions however; along with the usual limitation of only being able to drive 2 DVI-type monitors at once, AMD has reduced the 2nd DVI port to a single-link port (although it maintains the dual-link pin configuration), so you won’t be able to drive 2 2560 or 3D monitors using DVI ports.

Elsewhere the card features 2 CrossFire connectors at the top, allowing for tri-CF for the particularly rich and crazy. Next to the CF connectors you’ll find AMD’s not-so-secret switch, which controls the cards’ switchable BIOSes. The card has 2 BIOSes, which can be changed with the flick of a switch. The primary purpose of this switch is to offer a backup BIOS in case of a failed BIOS flash, as it’s possible to boot the card with the secondary BIOS and then switch back to the primary BIOS after the computer has started in order to reflash it. Normally AMD doesn’t strike us as very supportive of BIOS flashing, so this is an interesting change. 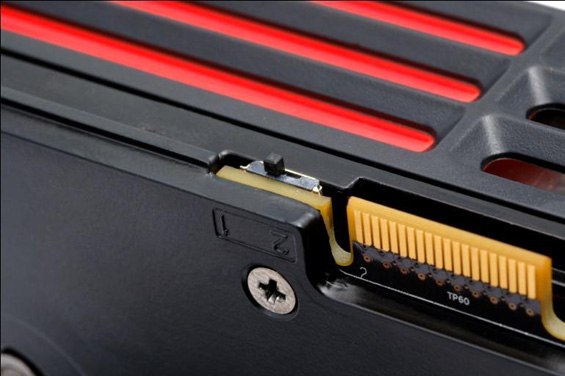 Like the 5870 the back side is covered with a metal plate, and while there aren’t any components on the back side of the card to protect, this is a nice touch by making it easier to grab the card without needing to worry about coming in contact with a pointy contact.

Finally, while the card’s overall dimensions are practically identical to the 5870, we noticed that the boxy design isn’t doing AMD any favors when it comes to CrossFire mode with 2 cards right next to each other. The 5870’s shroud actually jutted out just a bit at the center, keeping the ventilation hole for the blower from pressing right up against the back of another card. The 6970 does not have this luxury, meaning it’s possible to practically seal the upper card depending on how you screw the cards down. As a result our CF temperatures run high, but not to a troublesome degree. We’d still encourage AMD to take a page from NVIDIA’s book and to bring the shroud in a bit around the blower so that it has more room to breathe, particularly as their TDP is approaching NVIDIA’s. In the meantime we’d definitely suggest spacing your cards apart if you have a motherboard and case that allows it.