I narrowed down the platforms for our mobile IGP comparison. I simulated a Core i3 350M by taking an i3-530, underclocking it (I couldn't do anything about the 4MB vs. 3MB L3 cache) and capping its GPU frequency at 667MHz. This is the best case scenario for the i3-350M, and as you'll see below, it doesn't really matter. I also paired a 2.2GHz Pentium Dual-Core with a G45 motherboard, agian simulating the cheaper mobile Pentium platform. Finally I installed Windows 7 on the 1.6GHz Core 2 Duo based 11-inch MacBook Air with its GeForce 320M to give you an idea of the upper bound for mobile performance with what might as well be a low end discrete GPU. 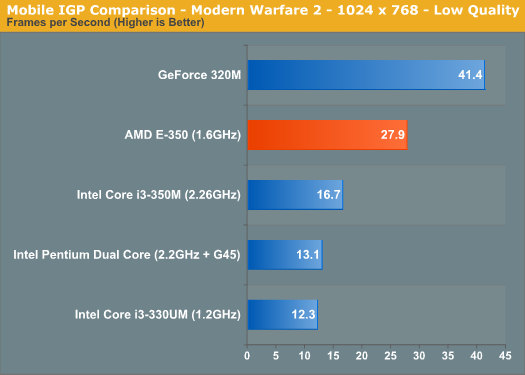 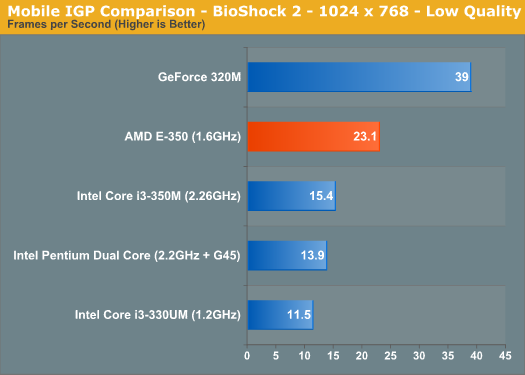 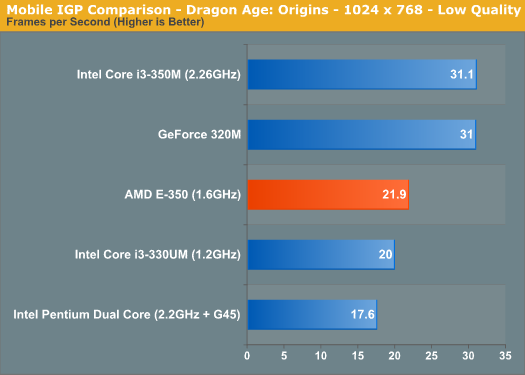 Dragon Age: Origins is mostly CPU bound at low quality settings and thus there's no real advantage to the E-350's Radeon HD 6310 GPU. It's faster than the Pentium/G45 platform, but significantly slower than the i3-350M. I expect most games however to be GPU bound at these settings across the board. 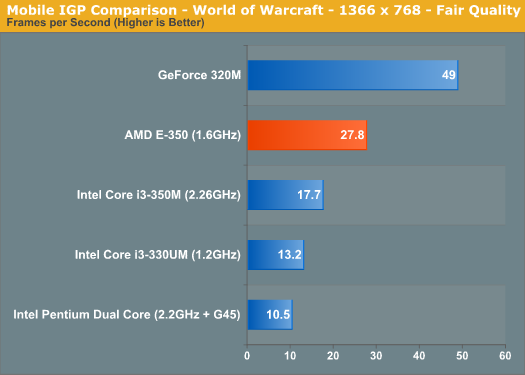 World of Warcraft continued the trend. The E-350 ended up 57% faster than the i3-350M, although still fell short of a discrete GPU.

Of course I wondered how well Brazos would play Starcraft 2: 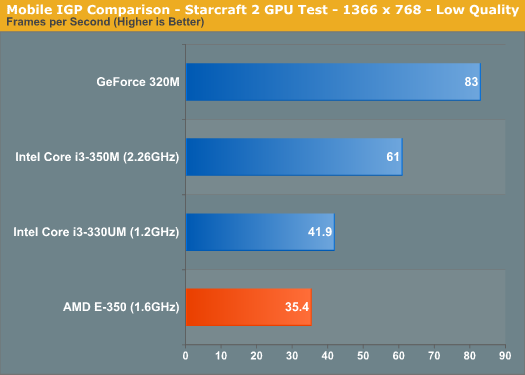 The GPU handles SC2 just fine, however the game is very CPU dependent and thus you see a pretty big advantage from the mainstream i3 system. The comparison is a lot closer when we look at the i3-330UM. The E-350 won't be able to play SC2 as well as a $500 mainstream notebook, but it'll be comparable to an ultraportable running ULV Arrandale.

We don't have numbers for the G45 platform here because the system wouldn't run our benchmark (our tests use an older version of SC2 which apparently had issues with the G45 drivers).

Our SC2 CPU test gives you an idea of the lower end of performance in large multiplayer battles: 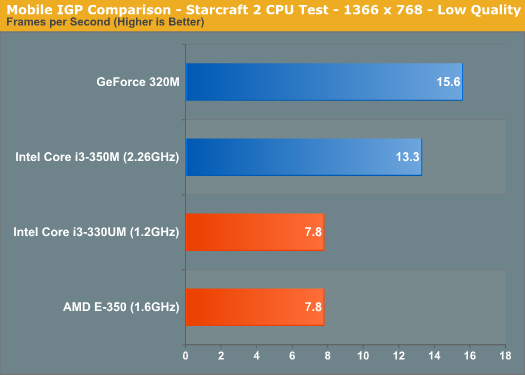 The E-350 offers only 58% of the performance of the i3-350M system. The Bobcat cores do hold the platform back from time to time. Again, compared to the i3-330UM there's no performance difference at all.

Just for kicks I also ran the Civilization V benchmark, which gave us two datapoints: GPU performance and no-render/CPU performance. 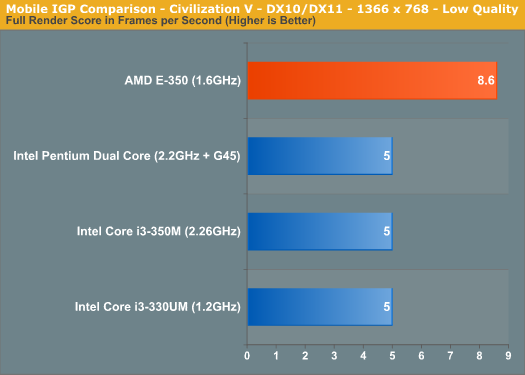 The benchmark doesn't score well on either platform, although AMD does hold a 72% performance advantage over the i3 and G45 platforms. The CPU test puts the E-350 at about 55% of the speed of the Pentium dual core platform. 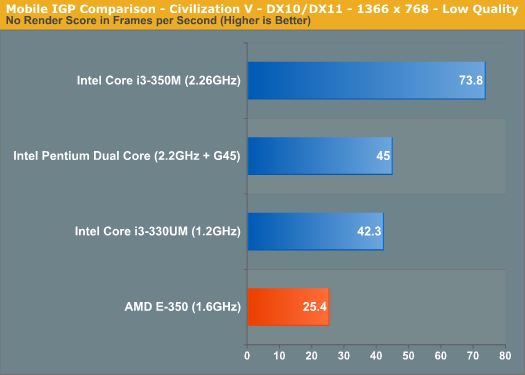 Civ V is one area where the Arrandale CPU advantage wins out over GPU performance.

Overall, the E-350 has no problems outperforming any of the current Intel integrated graphics offerings in 3D games. In CPU bound titles the E-350 loses out to the mainstream i3, but is competitive with ultra low voltage i3s. Just as with Atom, you'll have to sacrifice performance vs. a mainstream notebook, but compared to low voltage Arrandale the E-350 can hold its own.