Last but not least in our look at AMD’s new Radeon 6800 series is our look at power consumption, GPU temperatures, and the amount of noise generated. With efficiency being one of the major design goals for Barts, AMD stands to gain a lot of ground here compared to the 5800 series for only a minor drop in performance.

However our 6850 results, which include a non-reference card in the form of XFX’s customized 6850, are much more interesting. While our reference 6850 has a load voltage of 1.094v, our XFX card reports a load voltage of 1.148v. We’ll be taking a look at the XFX 6850 in-depth next week in our 6850 roundup, but for now this leaves us with the question of whether  AMD is using variable VIDs, or if XFX is purposely setting theirs higher for overclocking purposes.

Finally our EVGA GTX 460 1GB FTW card has a VID of 0.975v, which compared to all the other GTX 460 cards we’ve tested thus far makes it quite notable. This is lower than any of those other cards by 0.012v, a property we believe is necessary to sell such a heavily overclocked card without causing a similarly large rise in power/heat/noise. It’s also for this reason that we question whether NVIDIA could actually supply suitable GF104 GPUs in high volumes, as GPUs capable of running at this voltage are likely coming from the cream of the crop for NVIDIA.

For our tests, please note that we do not have a pair of reference 6850s. For our second 6850 we are using XFX’s customized 6850 card, which means our results will undoubtedly differ from what a pair of true reference cards would do. However as the 6850 reference design will not be widely available this is less important than it sounds. 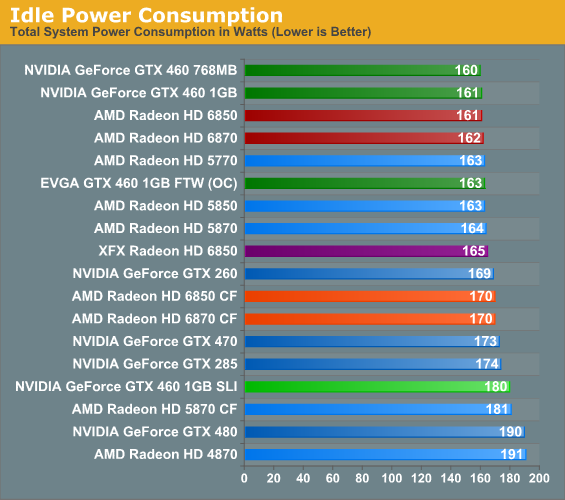 As always we start our look at power/temp/noise with our look at idle power. Because we use a 1200W PSU in our GPU test rig our PSU efficiency at idle is quite low, leading to the suppression of the actual difference between cards. But even with this kind of suppression it’s still possible to pick out what cards have a lower idle power draw, as the best cards will still result in a total system power draw that’s at least a couple of watts lower.

AMD’s official specs call for the 6800 series to have a lower idle power draw than the 5800 series, and while we can’t account for all 8 watts we do manage to shave a couple of watts off compared to our 5800 series cards. The Crossfire results are even more impressive, with the 6870CF drawing 11W less than the 5870CF. 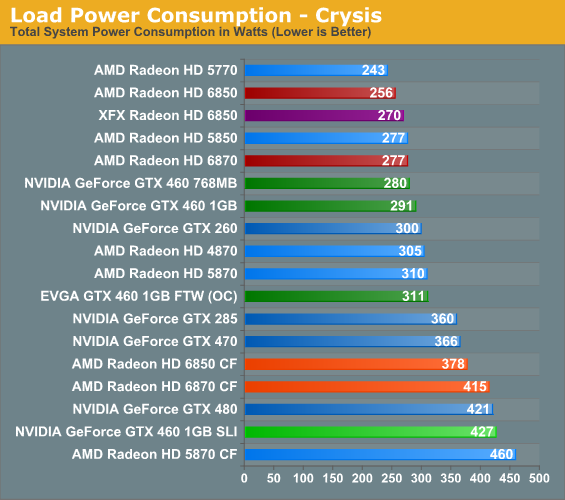 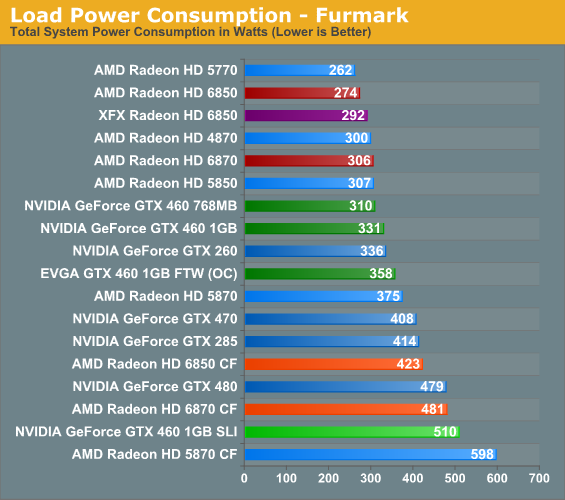 Looking at load power consumption it’s clear from the start that AMD’s efficiency gains are going to pay off here. On the latest iteration of our power consumption chart the 6850 underconsumes even the already conservative 5850 by 20W under Crysis and 25W under FurMark, showcasing how AMD was able to reduce their power consumption by a significant amount while giving up much less in the way of performance.

Compared to the 6800 series NVIDIA does notably worse here, with all of the GTX 460 cards pulling down more power than the 6870 and the GTX 470 being in a league of its own. While NVIDIA was competitive with Cypress on power, they’re not in a position to match Barts. They can deliver Barts-like performance (and then some), but they have to consume more power to do it. 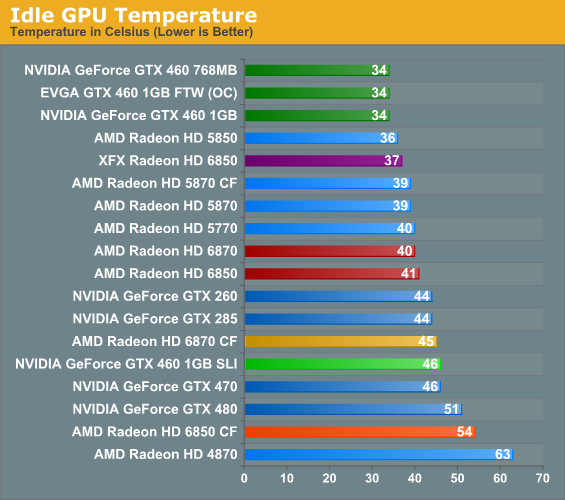 Up next is our look at GPU temperatures, starting with idle temps. As we mentioned in our GTX 460 review, NVIDIA ended up producing a very effective reference cooler for the GTX 460, utilizing an open-air design that by dissipating air inside and outside of the case is capable of reaching temperatures fully exhausting coolers can’t match. As a result all of the GTX 460 cards top our charts here.

Prior to the GTX 460 series this is a metric the 5850 always did well in, so we had expected a similar performance from the 6850, only to leave disappointed. What we’re ultimately looking at is a matter of the quality of the cooler: the 6850 may consume less power than the 5850 at idle, but it packs a weaker cooler overall, allowing it to approach these temperatures. For a gaming card such as the 6800 series idle temperatures are almost entirely superficial once we get below 50C, but even so this tells us something about the 6850 reference cooler. 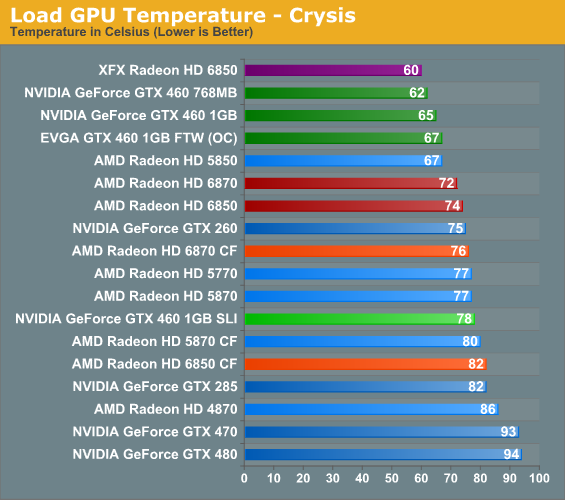 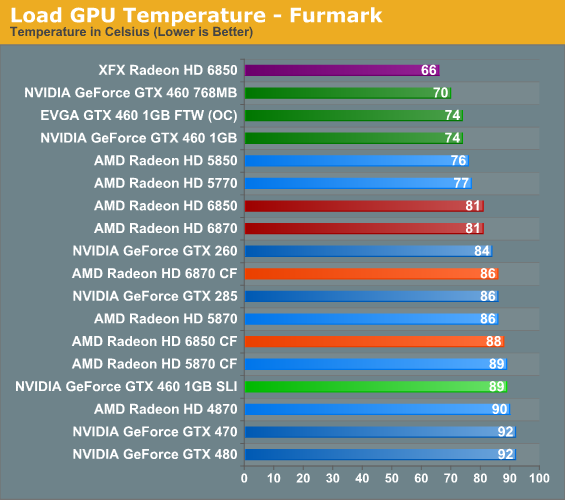 Thanks to the GTX 460’s open-air cooler, all of our GTX 460 cards top our temperature chart even with their higher power consumption. The trade-off is that all of these cards require a well-ventilated case, while the Radeon 5800 and 6800 series will tolerate much poorer cases so long as there’s enough ventilation for the card to pull in air in the first place.

As was the case with idle temperatures, the reference 6850 ends up doing worse than the 5850 here thanks to its less effective cooler; however the 6870 ends up doing better than both the 6850 and 5870 due to its more effective cooler and its lower power consumption compared to the 5870. While these cards can’t quite touch the GTX 460 series, we’re still looking at some of the coolest cards among our current benchmark suite.

Meanwhile our XFX 6850 ends up doing the best out of all of our cards here, however this will come at a cost of more noise. We'll touch on this more next week in our 6850 roundup. 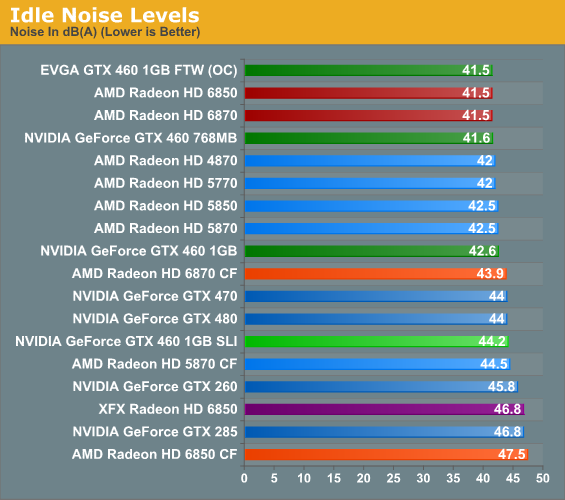 Last but not least is idle noise, which isn’t much of a story with modern cards. With the exception of the GTX 470/480, the latest GeForce and Radeon cards are both capable of running up against the noise floor of our testing environment. 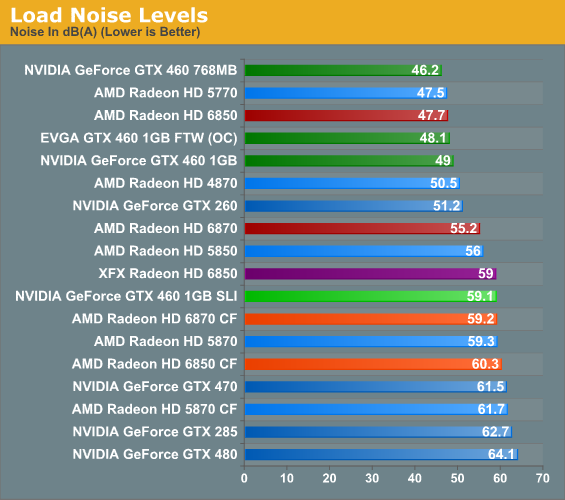 Under load we once again see an NVIDIA GTX 460 card top the chart thanks to its open-air design. This is followed very closely however by the Radeon 6850, which at 47.7dB is our third-quietest card and finally showing off the advantages of the tradeoffs AMD made with the reference cooler. The 6850 may not be as cool as the 5850, but it’s quite a bit quieter. As for the XFX card, this is where XFX has to pay the piper, as their 6850 card ends up being as loud as a 5870 in exchange for their lower temperatures.

Meanwhile the 6870 ends up being quite a bit louder than both the GTX 460 series and the 6850, coming in at 55.2dB. This is a definite leg-up compared to the 5870 and nicely cements the fact that the 6870 is intended to be the 5850’s replacement, but it means the GTX 460 series spoils the results here. Once custom-design vendor cards come out for the 6870, I suspect we’re going to see someone quickly sell a 6870 with a less aggressive cooler, which for the costs of higher temperatures would afford less noise.