All things considered, the Radeon HD 5000 series has gone very well for AMD. When they launched it just over a year ago, they beat NVIDIA to the punch by nearly 6 months and enjoyed a solid term as the kings of the GPU world, with halo parts like the 5870 and 5970 giving them renewed exposure at the high-end of the market while mainstream products like the 5670 redefining the HTPC.  Ultimately all good things come to an end though, and as NVIDIA has launched the GeForce 400 series AMD has needed to give up the single-GPU halo and lower prices in order to remain competitive.

But if spring is a period of renewal for NVIDIA, then it’s fall that’s AMD’s chance for renewal. Long before Cypress and the 5000 series even launched, AMD’s engineers had been hard at work at what would follow Cypress. Now a year after Cypress we get to meet the first GPU of the next Radeon family: Barts. With it comes the Radeon HD 6800 series, the culmination of what AMD has learned since designing and launching the 5800 series. AMD may not have a new process to produce chips on this year, but as we’ll see they definitely haven’t run out of ideas or ways to improve their efficiency on the 40nm process.

Launching today are the first two members of AMD’s HD 6000 series. At the top end we have the Radeon HD 6870, a card utilizing a full-fledged version of AMD’s new Barts GPU. The core clock runs at 900MHz, which is driving 32 ROPs and 1120 SPs. Attached to that is 1GB of GDDR5 running at 4.2GHz effective. AMD puts the load TDP at 151W (the same as the Radeon HD 5850) and the idle TDP at 19W, lower than the last generation parts.

Below that is the Radeon HD 6850, which in the long history of 50-parts is utilizing a harvested version of the Barts GPU, which along with a lower load voltage make the card the low-power member of the 6800 family. The 6850 runs at 775MHz and is attached to 960SPs. Like 6870 it has 1GB of GDDR5, this time running at 4GHz effective. With its lower power consumption its load TDP is 127W, and its idle TDP is unchanged from 6870 at 19W.

The Barts GPU at the heart of these cards is the first GPU of AMD’s Northern Islands family. We’ll dive more in to its architecture later, but for now it’s easiest to call it a Cypress derivative. Contrary to the (many) early rumors, it’s still using the same VLIW5 design, cache hierarchy, and ROPs as Cypress. There are some very notable changes compared to Cypress, but except for tessellation these are more about quality and features than it is about performance.

Compared to Cypress, Barts is a notably smaller GPU. It’s still made on TSMC’s finally-mature 40nm process, but compared to Cypress AMD has shaved off 450 million transistors, bringing the die size down from 334mm2 to 255mm2. Much of this is achieved through a reduction in the SIMD count, but as we’ll see when we talk about architecture, it’s one of many tricks. As a result of AMD’s efforts, Barts at 255mm2 is right in the middle of what AMD considers their sweet spot. As you may recall from the 5870/Cypress launch, Cypress missed the sweet spot in the name of features and performance, which made it a powerful chip but also made it more expensive to produce (and harder to fabricate) than AMD would have liked. Barts is a return to the sweet spot, and more generally a return to the structure AMD operated on with the 4800 series. 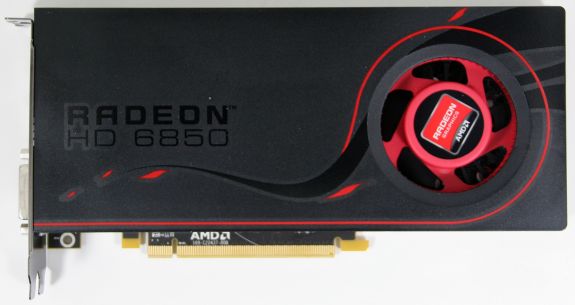 With a focus on the sweet spot, it should come as no surprise that AMD is also focusing on costs and pricing. Realistically the 6800 series composes a lower tier of cards than the 5800 series – the performance is a bit lower, and so is the pricing. With a smaller GPU, cheaper GDDR5, and cheaper/fewer components, AMD is able to practically drive some members of the 6800 series down below $200, something that wasn’t possible with Cypress.

For today’s launch AMD is pricing the Radeon HD 6870 at $239, and the Radeon HD 6850 at $179. This is a hard launch, and boards should be available by the time you’re reading this article (or shortly thereafter). The launch quantities are, as AMD puts it, in the “tens of thousands” for the entire 6800 series. Unfortunately they are not providing a breakdown based on card, so we don’t have a solid idea of how much of each card will be available. We do know that all the initial 6870 cards are going to be relabeled reference cards, while the 6850 is launching with a number of custom designs – and in fact a reference 6850 may be hard to come by. We believe this is a sign that most of the card supply will be 6850s with far fewer 6870s being on the market, but this isn’t something we can back up with numbers. Tens of thousands of units may also mean that all the cards are in short supply, as cheaper cards have a tendency to fly off the shelves even faster than expensive cards – and the 5800 series certainly set a record there.

The rest of AMD’s products remain unchanged. The 5700 continues as-is, while the 5800 will be entering its twilight weeks. We’re seeing prices on the cards come down a bit, particularly on the 5850 which is caught between the 6800 cards in performance, but officially AMD isn’t changing the 5800 series pricing. Even with that, AMD expects the remaining card supply to only last through the end of the year.

Countering AMD’s launch, NVIDIA has repriced their own cards. The GTX 460 768MB stays at $169, while the GTX 460 1GB will be coming down to $199, and the GTX 470 is coming down to a mind-boggling $259 (GF100 is not a cheap chip to make, folks!). NVIDIA is also banking on factory overclocked GTX 460 1GB cards, which we’ll get to in a bit. Seeing as how AMD delivered a rude surprise for NVIDIA when they dropped the price of the 5770 series ahead of the GTS 450 launch last month, NVIDIA is a least trying to return the favor.

Ultimately this means we’re looking at staggered pricing. NVIDIA and AMD do not have any products that are directly competing at the same price points: at every $20 you’re looking at switching between AMD and NVIDIA.

Barts: The Next Evolution of Cypress
Tweet
PRINT THIS ARTICLE
Comments Locked