Every huge company goes through the same motions when a smaller competitor starts making waves. Initially it’s always denial. The competitor doesn’t exist, they have no marketshare, why bother supporting them, etc... Then it’s mild recognition. The competitor exists but who cares, they make stupid products, our next version will assuage all fears. The next stage is depression, and the final stage (if the company survives) is outright competition. Microsoft is at that stage today.

Microsoft recognizes that a sizable portion of the market runs OS X, and it doesn’t want to leave them out of the fun. At launch Microsoft will deliver a beta version of OS X sync software called the Windows Phone 7 Connector. 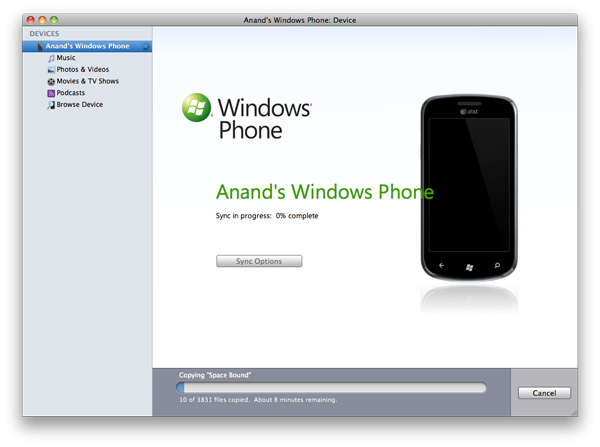 The connector application doesn’t mimic the functionality of the Zune Sync software for the PC. You don’t get any access to the Zune Marketplace, you can’t download apps, there’s no WiFi syncing support and (today) there’s no system update support. What the Connector is designed to do is get your non-DRM iTunes and iPhoto content from your Mac to your Windows Phone. Nothing more, nothing less.

I was supplied with an alpha of the Connector and despite fairly regular crashes (thankfully not while syncing), I’m happy to say it works. You get a very Apple-like interface. Just check the movies, music and photos you want and hit sync and you’re good to go.

The options are minimal. You can’t tell the Connector software to fill all available storage space on the phone with extra music or photos. You have to be very deliberate with what you want to put on the device.

The Connector will insert photos taken on the phone into iPhoto, unfortunately it puts them into albums (roughly one per day it seems) all named after your phone. In my case after a couple of syncs I had a lot of Anand’s Windows Phone albums in iPhoto.

Music downloaded from the Zune Marketplace will also attempt to sync, but it’ll fail miserably. For some reason the Connector tries to put downloaded music in iPhoto, which will of course throw an error: 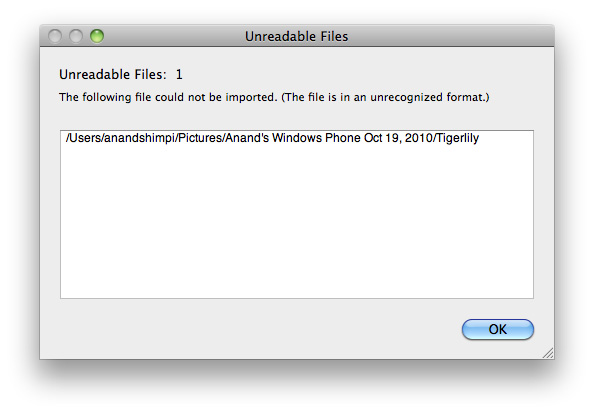 There’s no way around it and unfortunately that means any music you buy in the Zune Marketplace can’t be put on your Mac. Thankfully it seems like a quick fix and we’ve alerted Microsoft to the problem.

There’s also no support for contact or calendar syncing, that’s done through the cloud. You can sync your address book in OS X with Google Contacts and keep your phone synced that way, but you can’t do it over the USB cable.

You can view all of the content on your device but you can’t manage any of it (short of erasing it all). You can’t add/remove email accounts or do any of the things you can do with an iPhone in iTunes. Microsoft’s Windows Phone 7 Connector software is good enough to get the job done, but it’s far from a full fledged OS X client.

The first major update to Windows Phone 7 will come sometime early next year. It’ll bring copy & paste support along with other things. Microsoft plans to have OS update support enabled in the Connector by the time that update rolls around. Assuming all goes according to plan, you should be able to have a pretty decent experience as a Mac user with a Windows Phone. You won’t get the full monty, but you’ll have enough to get by.

Microsoft needs to, as quickly as it can, bring all of the features of the Zune Sync client on the PC to OS X. WiFi syncing, marketplace access - everything. The fact that Microsoft is even providing this option is enough to convince me that it’s serious about being successful here. Windows Phone isn’t just here to offer an alternative, it’s here to take away market share from Apple. To make that happen, Microsoft needs to at least offer feature parity with its sync software for OS X users.