Our bladecenters are full of high performance blades that we use to run a virtualized hosting environment at this time. Since the blades that are in those systems are in production, we couldn’t very well use them to test the performance of our ZFS system. As such, we had to build another blade. We wanted the blade to be similar in spec to the blades that we were using, but we also wanted to utilize some of the new technology that has come out since we put many of our blades into production. Our current environment is mixed with blades that are running Dual Xeon 5420 processors w/ 32GB and dual 250GB SATA hard drives, some systems that are running Dual Xeon 5520 processors w/48GB and dual 32GB SAS ’s.  We use the RAID1 volumes in each blade as boot volumes. All of our content is stored on RAID10 SANs.

Following that tradition we decided to use the SuperMicro SBI-7126T-S6 as our base blade. We populated it with Dual Xeon 5620 processors (Intel Xeon Nehalem/Westmere based 32nm quad core), 48GB Registered 3 memory, dual Intel X-25V drives (for boot in a RAID1 mirror) and a SuperMicro -IBH-XDD InfiniBand Mezzanine card. 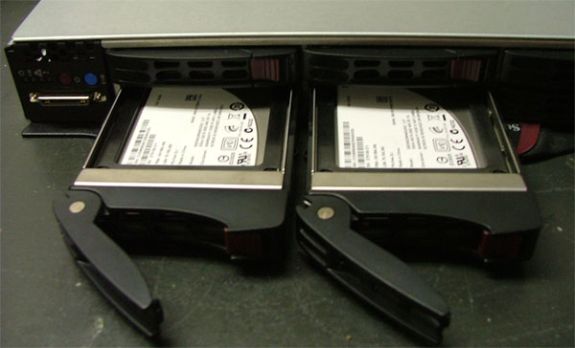 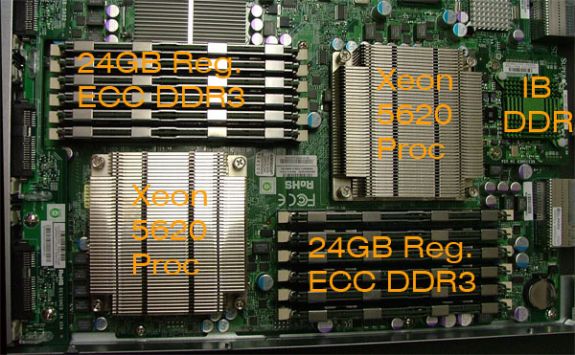 Our tests will be run using Windows 2008R2 and Iometer. We will be testing iSCSI connections over gigabit Ethernet, as this is what most budget builds are based around.  Our blades also offer us connectivity options in the form of 10Gb Ethernet and 20Gb Infiniband but those connections are out of the scope of this article.

The OpenSolaris box, as tested was quite inexpensive for the amount of hardware added to it.  Overall costs for the OpenSolaris system was $6765.  The breakdown is here :

While OpenSolaris is completely free, Nexenta is a bit different, as there are software costs to consider when building a Nexenta system.  There are three versions of Nexenta you can choose from if you decide to use Nexenta instead of OpenSolaris.  The first is Nexenta Core Platform, which allows unlimited storage, but does not have the GUI interface.  The second is Nexenta Community Edition, which supports up to 12TB of storage and a subset of the features.  The third is their high end solution, Nexenta Enterprise.  Nexenta Enterprise is a paid-for product that has a broad feature set and support, accompanied by a price tag.

The hardware costs for the Nexenta system are identical to the OpenSolaris system.  We opted for the trial Enterprise license for testing (unlimited storage, 45 days) as we have 18TB of billable storage.  Nexenta charges you based on the number of TB that you have in your storage array.  As configured the Nexenta license for our system would cost $3090, bringing the total cost of a Nexenta Enterprise licensed system to $9855.

How we tested with Iometer

The tests were run in this order, and each test was run for 3 minutes at each queue depth.

While running these tests, bear in mind that the longer the tests run, the better the performance should be on the OpenSolaris and Nexenta systems.  This is due to the L2ARC caching.  The L2ARC populates slowly to reduce the amount of wear on MLC drives (approximately 7MB/sec).  When you run a test over a significant amount of time the caching should improve the number of IOPS that the OpenSolaris and Nexenta systems are able to achieve.