Launching alongside the GTS 450 is NVIDIA’s Forceware 260 driver series, which should be available for download later this morning. This release brings an interesting mix of changes to performance, features, and even the installation routine.

We’ll start with the installer. The old Installshield installer is out in favor of a new NVIDIA-developed installer. By moving to their own installer, NVIDIA was able to do some consolidation and some simplification of the install process. Consolidation comes in the form of all of NVIDIA’s major driver packages being in the same installer. Previously the 3D Vision driver set was a separate download from the main drivers; now they’re part of the main driver bundle. In exchange for consolidating their drivers, NVIDIA now offers the ability to pick & choose which driver components to wish to install; currently there are the main drivers, PhysX, the audio drivers, and the 3D Vision drivers. If you’ve used the AMD Catalyst installer, then you should be familiar with this. 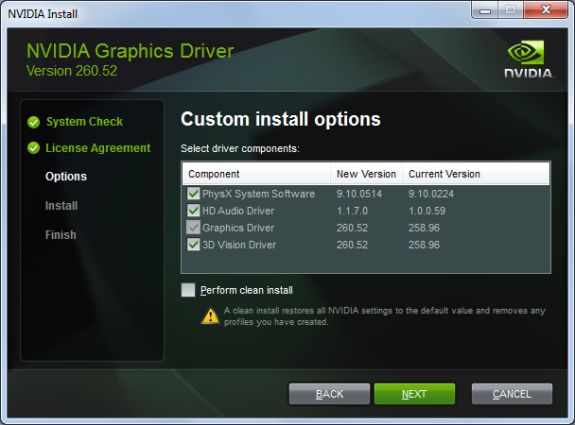 Meanwhile simplification comes from a few different changes. When doing a custom installation NVIDIA offers the ability to do a clean install straight from the driver installer, vastly simplifying the clean install process and eliminating the need for a 3rd party utility to do this. Do keep in mind however that a clean install cleans everything including saved profiles, and under normal circumstances a clean install should not be required.

The other reason we call these drivers simple is that the new installer is much faster than the old Installshield installer. NVIDIA specifically cites SLI situations – where the old installer would install the same drivers twice (once for each card) – but even in a single card situation the process is noticeably faster; we shaved 15 seconds off of the installation process compared to the 258.96 drivers. With any luck you aren’t installing drivers often enough that 15 seconds makes a huge difference (and if you are, you’re probably me) but if you are, then there’s definitely a perk for you in these drivers.

Finally, the size of the driver package remains virtually unchanged from the previous driver release. Our 64bit 260.52 international beta installer is 154MB, while the 64bit 258.96 international installer is 153MB; if anything it’s slightly smaller after factoring in the fact that it now contains the 3D Vision drivers too. But it goes without saying that modern video drivers from both AMD and NVIDIA are ridiculously huge, and this new installer doesn’t do anything to change that.

Meanwhile NVIDIA is also pushing this driver release as another big performance-boosting release. Compared to the 256 release for the GTX 460 it’s not nearly as large or as widespread of a performance boost, but there are several targeted titles that got performance boosts, mostly in SLI mode. As far as our own benchmark suite is concerned, the only titles we saw receiving a major improvement in single-GPU operation were Mass Effect 2 where performance improved 11% with our 768MB GTX 460, and STALKER: Call of Pripyat where performance improved 5% on the same card at the same resolution.

Finally, this release enabled bitstreaming audio for the newer members of the 400 series. As you may recall in our GTX 460 article, starting with GF104 NVIDIA has given the hardware the capability to bitstream the lossless audio formats DTS-HD Master Audio and Dolby TrueHD; GF100 and GT21x were limited to 8 channel LPCM. When the GTX 460 launched the drivers weren’t ready, and only unprotected bitstreaming was working. With this release the protected audio path is working, allowing bitstreaming of lossless audio from protected sources such as Blu-Ray discs.

We didn’t have the chance to test this on a GTS 450 as we had to catch a flight to IDF, however we did test this against a GTX 460 with the new drivers and it worked as it was supposed to. 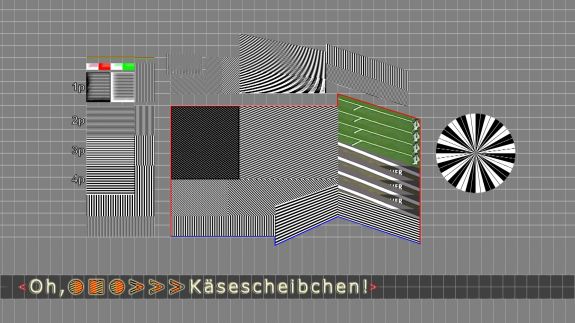 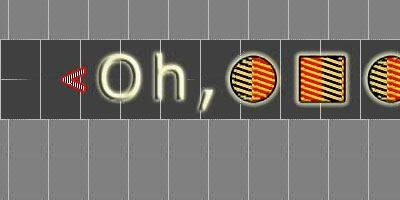 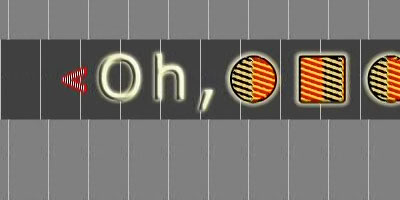 For those of you looking at a GTS 450 as an HTPC card, we also quickly ran our favorite Cheese Slices test as a quick look at deinterlacing quality. As this is a test of computer power (if you have enough shaders, you can pass the test) there aren’t any huge surprises here. When compared to the Radeon HD 5670, the GTS 450 does a slightly better job properly deinterlacing the angled lines within the shapes at the bottom of the screen, but it does a poorer job deinterlacing a box full of angled lines elsewhere on the screen. Overall this is a wash between the two cards and par for the course for modern cards with this test.

On one last note, these don’t appear to be NVIDIA’s best drivers with respect to everything working. The 260.52 beta drivers we’re using have a bug in OpenCL that keeps it from working, which is why you will see that we have dropped OpenCL benchmarks in today’s review. NVIDIA tells us that the version of the 260 drivers being released later this morning have the issue fixed, but it’s not a particularly encouraging sign since we don’t normally run in to issues with their beta drivers.