The reference GTS 450 takes a number of cues from the GTX 460, and without labeling on the card it’s actually quite easy to confuse with its bigger sibling. Top-side it uses the same concave shroud and partially-raised fan setup at the GTX 460, and only when you remove these cooling components do you find a simpler circular all-aluminum heatsink between the fan and the GF106 GPU. 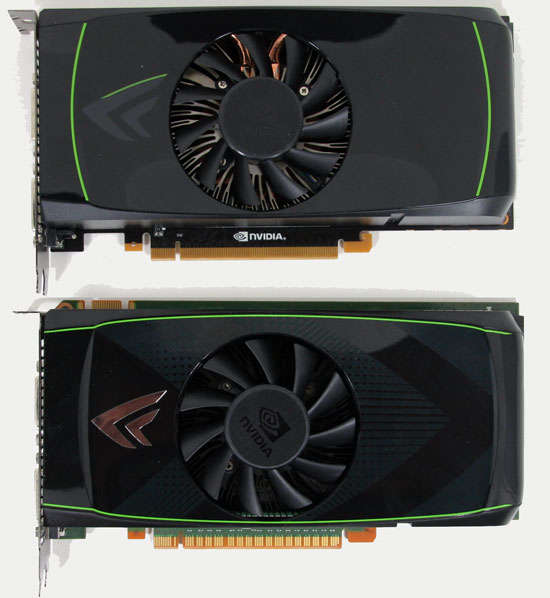 Since this uses the same cooler design as the GTX 460, it has the same properties: it’s not a fully-exhausting design. The cooler on the reference GTS 450 exhausts towards both the front and the rear of the case, so some degree of case cooling is important. At only 106W TDP this shouldn’t be much of an issue, but there needs to be some airflow within the case. 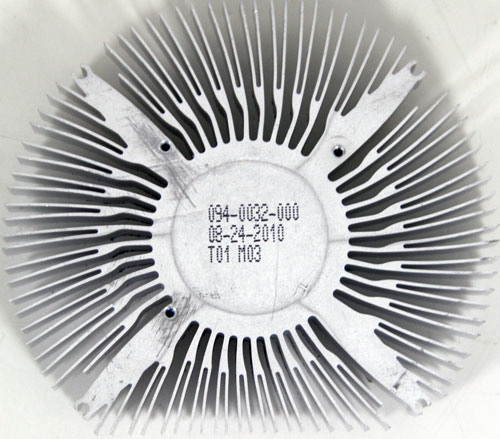 Meanwhile the PCB and resulting card measure 8.25” long, the same as the GTX 460. This coincidentally is the same length as the reference Radeon HD 5770. The PCB houses pads for 12 GDDR5 memory chips with 6 pads on each the front and back, highlighting the fact that this card isn’t using a full GF106 GPU. With only a 106W TDP, only a single 6-pin PCIe power socket is required to power the card. As with the GTX 460, this socket is rear-facing.

The PCB itself is fairly unremarkable. As is the case with cheaper cards the components are a bit cheaper – you can see a ring-choke near the PCIe power socket. With the card’s fairly low TDP the MOSFETs serving as part of the VRM setup do not require any cooling with the breeze from the fan being enough to cool them at default voltages. The card comes equipped with 8 Samsung GDDR5 memory chips, rated for 4GHz operation. This means there’s a bit of headroom for RAM overclocking if the memory controller is willing to cooperate. 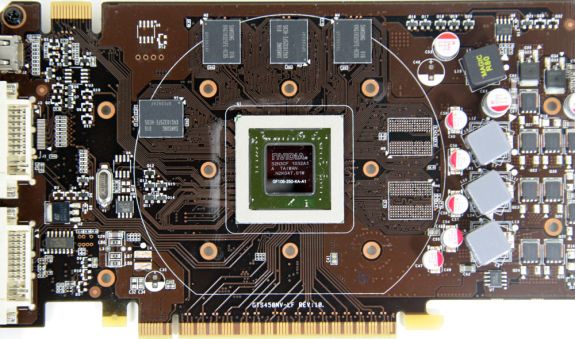 The port configuration remains unchanged from the rest of the 400 series: 2 DVI ports and a mini-HDMI port. The GF106 GPU can only drive 2 displays just like the rest of the Fermi family, so for output options pick any 2 ports. Like the rest of the 400 series, the GTS 400 series is also surround vision capable, so if you have a second card you can SLI them together to gain an additional display output for triple-monitor usage. As this is a lower-end product 3D Vision Surround is not supported due to the lack of performance, but NVIDIA Surround (2D) is supported.

Finally, as was the case with the GTX 460 launch, a number of partners will be launching their own designs today, which we are covering in our companion article that focuses on them. All of these cards are using the NVIDIA reference design or what appears to be a minor variation of it; the big difference on the hardware side of things is the cooler used and bracing methods.