As was the case with Lynnfield, the current Sandy Bridge CPUs Intel is sampling are slightly different than what will be sold. The Core i5 2400 runs at 3.1GHz, has four cores, 6MB of L3 cache but no Hyper Threading. In order to help Intel’s partners test HT functionality however, the i5 2400s being sampled right now have Hyper Threading enabled. For the purposes of our test I’ve run with HT both enabled (to give you an idea of higher end SB parts) and disabled (to give you an idea of i5 2400 performance).

The other major difference between what’s out today and what’s coming in Q1 is turbo. Early Sandy Bridge samples, ours included, do not have turbo enabled. The CPU simply runs at 3.1GHz all the time, regardless of workload. The final retail 2400 will be able to run at up to 3.4GHz.

In other words, what we show here should be indicative of final performance, but it's probably slower than what will ship in Q1. 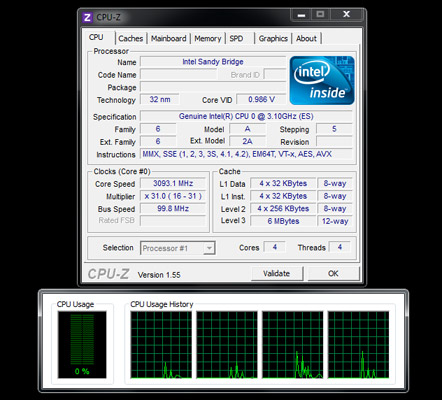 On the GPU side, the part I’m testing appears to be the single-core GPU configuration (6 EUs). Intel hasn’t released any info as to what parts will get the dual-core/12 EUs GPU configurations, although it may make sense for Intel to use the 12 EU parts in notebooks given the importance of integrated graphics to the mobile market. Update: The part we're looking at may actually have been a lower clocked 12 EU part, we're still waiting for additional confirmation.

Our test platform was a H67 based motherboard running with 4GB of DDR3-1333, the same memory we use in our Lynnfield testbeds.

I’m comparing to four other CPUs. The Core i7 980X for a high end comparison, the Core i7 880 for a near clock-for-clock comparison (albeit with HT enabled), the Core i5 760 for a potential price comparison and the Phenom II X6 1090T. The latter should be AMD’s fastest offering (if not close to it) when Sandy Bridge ships. Update: Note the Core i5 650 is actually the predecessor to the Core i5 2400, however I didn't feel a dual core vs. quad core comparison was too fair. The i5 760 will actually go head to head with the higher clocked i5 2500 when it launches in Q1.