Inside and Outside the Samsung N210

If you can't do a whole lot to differentiate the inside of a ten-inch netbook, you can certainly try to differentiate the outside, and Samsung has done a bang-up job of producing a very sleek, very stylish netbook that's about as practical as a computer this small can really get.

Glossy plastics have been a plague on PC kind for far too long now, with manufacturers like HP only recently starting to quietly back away from their use. And while the Samsung notebooks found in retail do still suffer the disease, the N210 is freakishly conservative and classy in design.

Starting from the top is the lid, which contains the only evidence of "glossy" you will find on the entirety of the N210. The white lid, however, is very attractive; the "gloss" appears to be a sheet of clear plastic that sits above a matte plastic lid, with the tasteful "Samsung" lettering seeming to hover slightly above the surface as a result. This clear plastic curves near the bottom and accentuates the hinge, but it's very tasteful and understated. 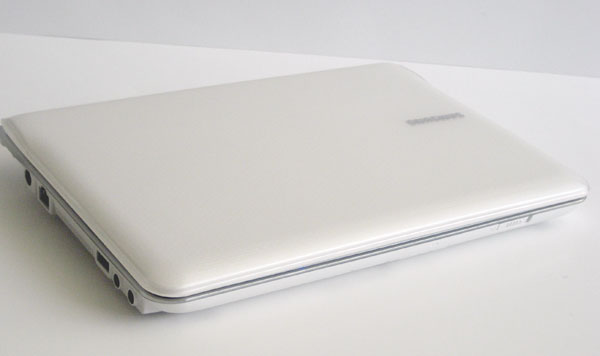 When you open the machine, you'll find the rest of it covered in head-to-toe matte white plastic, from the screen bezel to the keyboard to the palm rest to the bottom of the netbook. Samsung employs a white chiclet-style keyboard in the body, positioned just beneath the speaker bar. The rest of the body has a mild chrome accent trim.

The keyboard is about as comfortable as one could really ask for on a netbook this size. It's for the most part easy to get used to, and the keys have good travel and depth, but they keyboard layout leaves at least something to be desired (as they often do when compromises have to be made). Samsung uses combination Fn+arrow keys to handle volume and screen brightness, with Page Up and Page Down keys flanking the top arrow. As a matter of taste I might have preferred the arrow keys to turn into navigation keys when the Fn key is pressed; I've seen this on other keyboards before and it's a logical way to handle document navigation. Difficult to adapt to this results in randomly changing your brightness or increasing the volume when you really just wanted it muted. 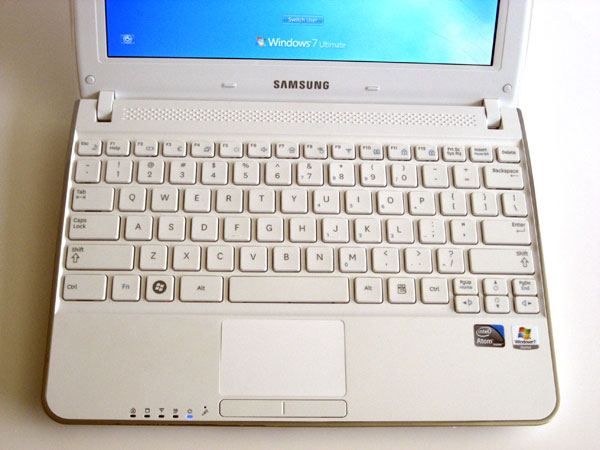 It also gets worse when you learn what the key combinations are for Samsung's resolution-scaling software. Samsung includes software that scales a 1024x768 resolution onto the 1024x600 screen, but the problem is that the switch is made by holding Control, Shift, Fn, and then hitting the left or right arrow keys. If you're editing text and muscle memory dictates to you that Fn+left arrow is Home, you'll find yourself accidentally switching the resolution.

Still, if you can adjust to the somewhat odd key choices on the arrow keys, the Samsung N210's keyboard should be easy to live with, and mercifully the touchpad doesn't share any of the problems. The multitouch functionality is cute in practice but wound up being flaky and inconsistent in theory; multitouch notwithstanding, the touchpad is comfortable to use, and the rocker switch for the left and right mouse buttons works just fine. Given the mangled touchpads HP and Dell are shipping on their modern netbooks (Apple's Macbook pad doesn't have to manage a left-click and a right-click with distinct buttons guys, just a heads up), the N210's is a breath of fresh air.

The last oddity for the N210 is the spring-loaded power switch. Instead of including a button like most sane manufacturers might, Samsung employs a switch that you have to slide to the right and then release to turn the netbook on. Not a huge deal, no great problem, just an odd accent when a good old-fashioned power button probably would've done the job.

And finally, as a heads up for enterprising users looking to expand the power of their netbook, look elsewhere: the bottom of the N210 features a single hatch for a single slot memory bay to bring the unit up to 2GB of DDR2. The battery may be user-replaceable, but the hard disk is not and requires removing thirteen screws on the bottom of the casing to access.