It still takes almost two seconds to activate the camera on the 4, which is enough time to miss whatever it is you’re trying to grab a photo of. Thanks to the iOS 4 update however, the shutter is almost instantaneous. The difference appears to be that the photo is committed to memory but not fully written to NAND, whereas before the photo would be written to the Flash before you could take another picture. Power loss in the middle of snapping photos seems pretty rare on a smartphone so the tradeoff, if I’m correct, makes sense.

Apple opted for a lower noise rather than higher resolution sensor in the iPhone 4 and it did pay off. The main camera shoots photos at 2592 x 1936 compared to the EVO 4G’s 3264 x 1952, but the resulting images are far less noisy - particularly in low light situations: 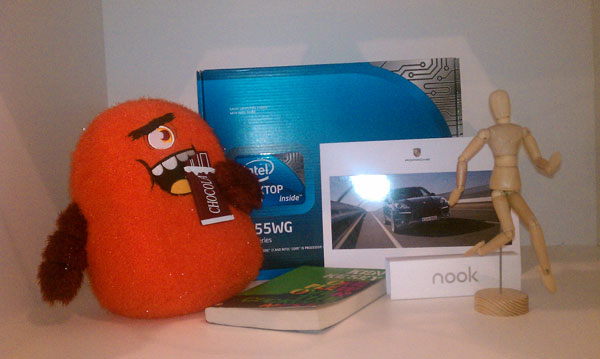 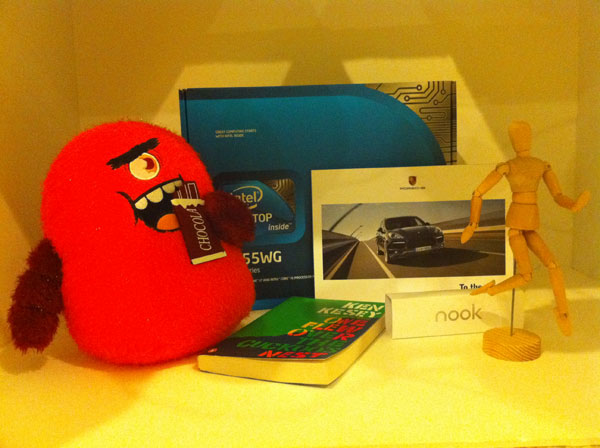 The 4’s main camera, like the HTC Incredible and EVO 4G, is a decent replacement for a point and shoot if you’re primarily outdoors. You’re still going to get better image quality out of a good point and shoot, but the tradeoff is convenience. The limitations are significant.

Because you rely on the iPhone 4’s software controlled aperture and shutter speed you don’t have the ability to properly expose the image. You have to rely on Apple’s algorithms, which tend to either overexpose outdoors or miscalculate white balance with non-halogen light sources.

This is an example of a photo taken outdoors that’s more washed out than it needs to be: 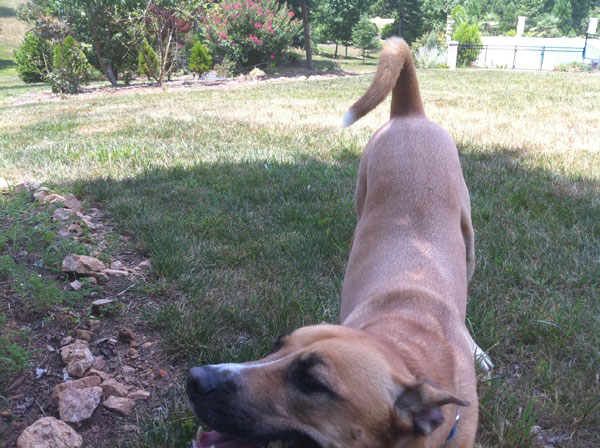 And many of you picked up on the white balance issue I snuck into our EVO 4G review yesterday: 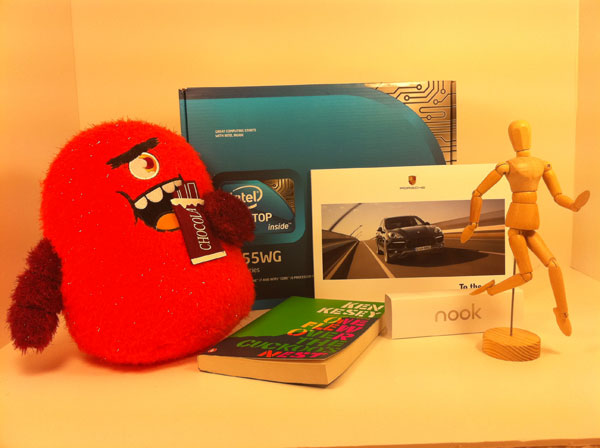 Regardless of where I tapped to focus, I could not get the iPhone 4 to set a proper white balance in our photo box.

While I was watching the screen, the iPhone 4 would alternate between yellow and white for the background color. It seemed to be trying to calculate the white point but was just being thrown off by the type of light. If I timed the shot right I could snag the photo while the iPhone was switching between white balance points: 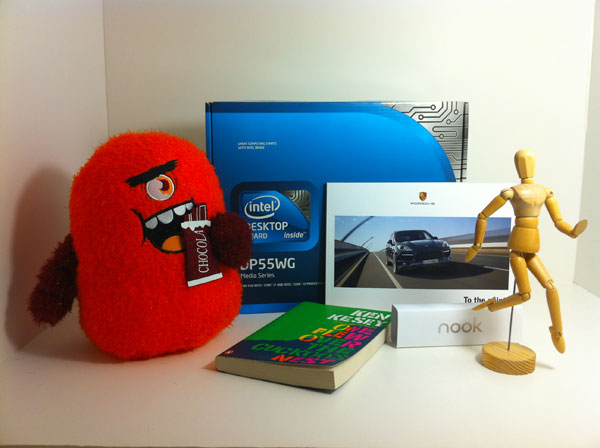 I also had this problem in my office which uses LED can lights. 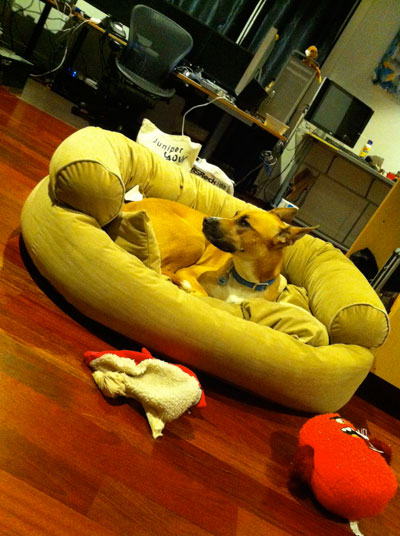 This is far more yellow than it should be

While Brian didn't have the same problems I did, Brandon Hill (DailyTech Editor in Chief) did. It seems to be very dependent on the type of lighting you have and even then it seems to vary based on the type of CFLs. And unlike the EVO 4G, there’s no way to manually set a white balance on the 4.

For overall image quality though I have to hand it to Apple, the iPhone 4 does do a better job than the EVO 4G or other phones I’ve used. Take a look at this shot inside my house: 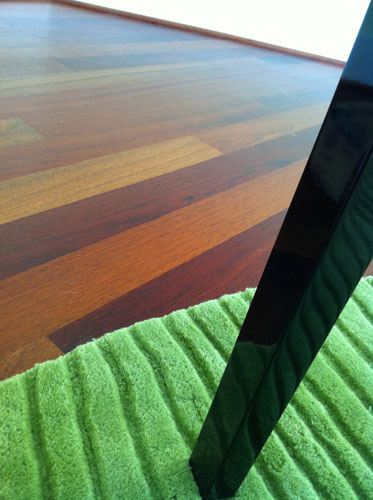 The colors in the iPhone 4 shot are on point. The green is correct, the wooden floor is right and the black is, well, black. The EVO 4G didn’t do so well on this test by comparison: 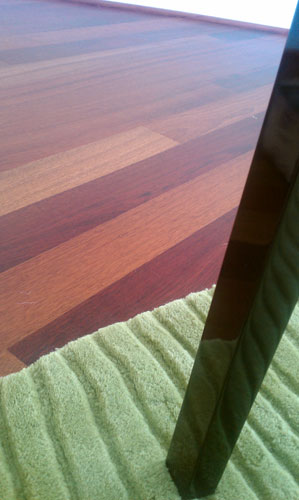 The 4’s camera isn’t perfect, but it does appear to handle colors better than the EVO (with the exception of my white balance issue) and delivers lower noise photos.

Compared to other phones the 4 does similarly well, besting the 5 megapixel camera in the Motorola Droid easily in terms of color reproduction and sharpness. Though the HTC Incredible previously was a top performer alongside the N900, the iPhone 4 makes the Incredible look a bit oversharpened and artificial. Compared to the 3GS, the iPhone 4's improvement is obviously dramatic, as shown in the gallery below.

Video is recorded at 1280x720, in H.264 with AAC mono audio. We measured a bitrate of 1.35 MBps, outclassing all the other smartphones we've tested. 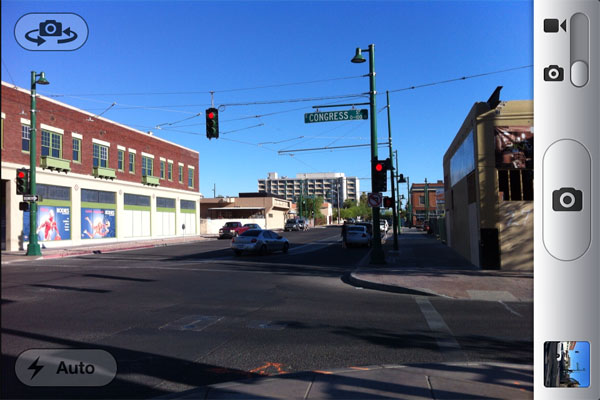 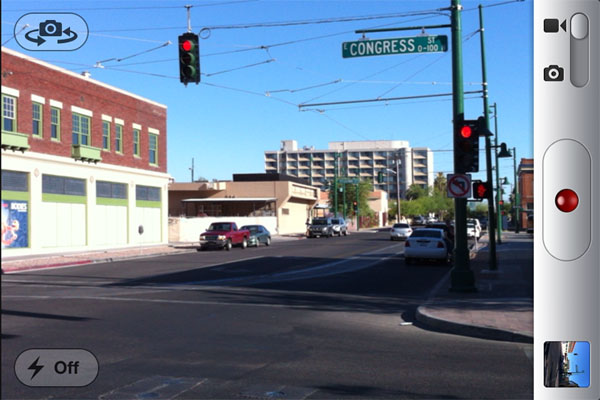 You can see the difference is quite notable standing in the same place. Perhaps the A4 SoC lacks the compute power to apply a scale and encode at the same time, necessitating this crop. Whatever the case, video shot with the iPhone 4 still looks very good at the promised and delivered 30 FPS. Move the camera around enough, and there's still screen door effect from the rolling shutter like any CMOS sensor is going to give you - it's a fundamental problem no phones are going to get around soon. Its also right there in the specifications page for the camera SoC; rolling shutter.

Similarly, iPhone 4 does give you 5x digital zoom, though we still maintain you're better off taking photos at native resolution and messing with them later with better interpolation algorithms. 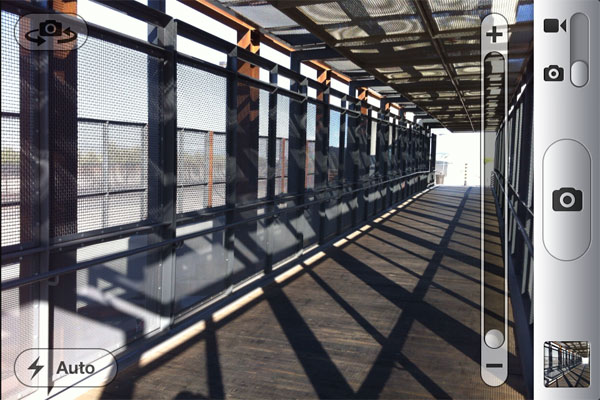 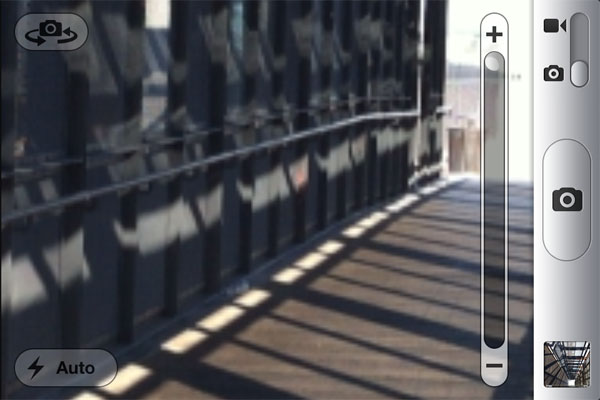