Welcome to 2010, Apple Upgrades its Camera

The iPhone 4 is equipped with two cameras: a 5 megapixel camera with LED flash on the back of the phone and a VGA camera with no flash on the front. The LED flash works in both still and video modes. Like the EVO 4G, the iPhone 4‘s flash allows you to shoot in perfect darkness. If you’re filming a video in low light the LED will stay illuminated while you’re recording. 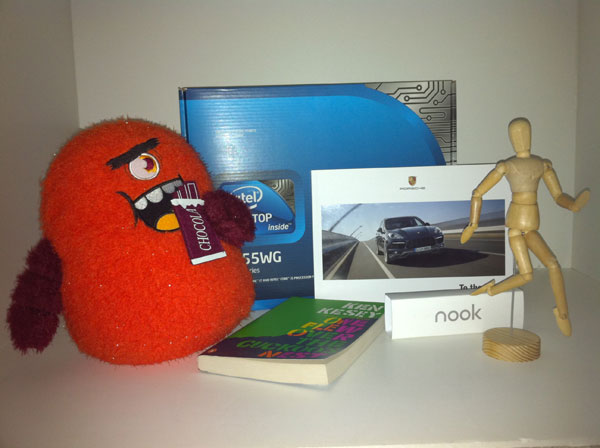 Taken with the iPhone 4 in total darkness

The same unfortunately can’t be said for the front facing camera on the 4. In anything but good lighting you’re going to get noise. It’s really only useful for FaceTime (or as an alternative to a mirror) and even then you need to be well lit for it to look decent.

Apple has opted for a 5 megapixel OmniVision sensor for the rear camera on the iPhone 4. What's interesting is that Apple has decided to bring backside illumination front and center with their marketing.

Backside illumination improves the sensitivity of CMOS and CCD detectors by reducing the amount of material in the path of incident light. In a frontside illuminated detector, a considerable amount of light is lost due to absorption that doesn't result in emission of an electron, in addition to reflection off pixel structures and electrical components near the frontside surface. Backside illumination greatly improves sensitivity by flipping the stack over. Instead of light having to pass through and possibly be reflected by metal structures, it is converted into electrons and read out by passing solely through silicon. Creating a backside illuminated part isn't as simple as flipping a sensor over, however, as manufacturers also generally thin the silicon light has to pass through before it can reach the photodiode. This further improves sensitivity and is generally accomplished through chemical etching in acid or by lapping (physically grinding) sensors at wafer scale.

Though backside illumination (BSI) improves quantum efficiency (how many photons are converted into electons), backside illumination is hugely important for another serious reason as well. Because the sensor is small at 4.6 mm by 3.4 mm, pixel size is also extremely small at just 1.75 microns square for the OV5650 in the iPhone 4 (state of the art sensors are 1.4 microns square, like those in the HTC Incredible's 8 MP sensor). Frontside illuminated parts generally have in the neighborhood of 10-15 microns of silicon before the active region of the photodiode where one wants photons to get converted to electrons. The result is that without backside illumination, pixels have a 10:1 ratio of height to length, you can visualize them as looking something like long square pillars. But that's a problem.

As photons are converted into electrons in that silicon, there's no guarantee that it will immediately travel down into the gate structure below to be read out by the camera. Electrons drift as they descend these columns, meaning that photons incident on one pixel don't necessarily map to the gate below. Because the smartphone camera sensors are so small, with a 10:1 ratio of height to size, the result is large amounts of so-called quantum blurring from electrons traveling into the gate structures of adjacent pixels. The result is a blurry image (and a decrease in MTF at the sensor level!), thus not representing the image that used to be incident on the sensor.

OmniVision and other smartphone CMOS sensor manufacturers thin that column down in an effort to come closer to having the pixel look more like a cube than a huge pillar. Ballpark numbers are between 3 and 6 microns, down from 10-15. The result is much more sensitive sensors that are higher resolution. While megapixels don't necessarily matter, neither does pixel size as much anymore; it's all about quantum efficiency, which is what engineers really care about. 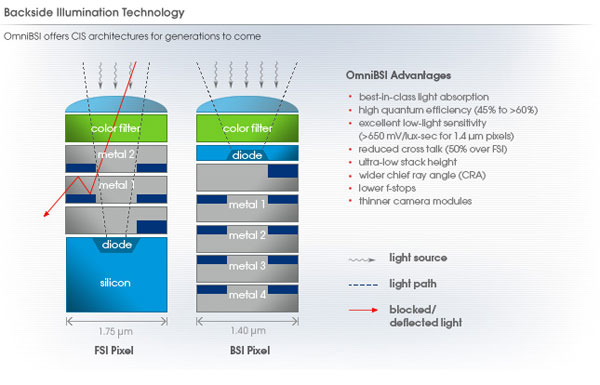 The optical system of the iPhone 4 is difficult to characterize without disassembly, though the focal length is a bit shorter than previous iPhones. The result is that the photos are demonstrably wider angle. Backside illumination also allows for a bigger chief ray angle, higher numerical aperture (and thus lower f/#), but I won't bore you with the details.