The secret begins at the motherboard level. It all starts with a single core Intel Atom Z530 (1.6GHz, Silverthorne) and US15 chipset (Poulsbo). Astute readers will recognize this as the previous generation Intel Atom platform for MIDs, codenamed Menlow. SeaMicro chose single core Menlow and not the newer Pine Trail platform in order to hit its power targets. Moorestown would probably be a good fit as well but the chips only recently started shipping. Hanging off Poulsbo is 2GB of DDR2 memory.

SeaMicro excludes the I/O hub and instead connects its custom ASIC over Poulsbo’s PCIe x2 interface. The custom ASIC emulates all I/O features, everything from SATA to Gigabit Ethernet is handled by the SeaMicro chip. As far as the Atom CPU is concerned, it has a bunch of I/O devices that hang off of Poulsbo. The virtualized I/O is a key part of making SeaMicro’s technology work. 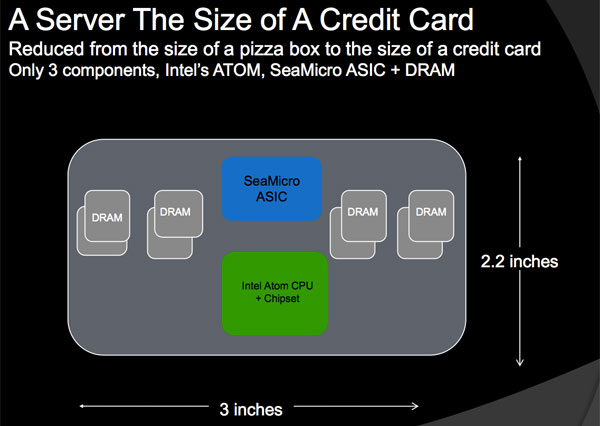 SeaMicro then takes eight of these server building blocks and puts them on a card measuring 5” x 11”. Instead of using one SeaMicro ASIC per Atom, the ratio is one ASIC per two Atom processors. 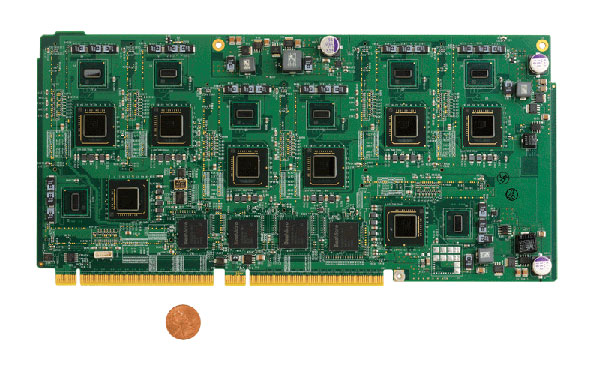 Eight Atom "servers", four SeaMicro ASICs and a 32-lane electrical PCIe interface to the rest of the box

Each one of these cards has a pair of electrical PCIe x16 connectors that plug into the SM10000’s back plane.

A single SM10000 can support up to 64 of these cards, which is how you end up with 512 Atom CPUs in a 10U chassis. Intra-system communication occurs over a multidimensional torus bus interface. The link is built by connecting all of the SM ASICs together, allowing each Atom server to communicate with any other server in the system.

Despite being well connected, the server architecture doesn’t support shared memory (each Atom has exclusive access to its 2GB of DRAM). The torus interface is instead used to share the virtualized I/O amongst all of the servers. If server/CPU 0 wants to access the virtual HDD on server 206, it can. Each hop takes 8 microseconds so it’s fairly low latency for storage and network I/O but not fast enough for memory. 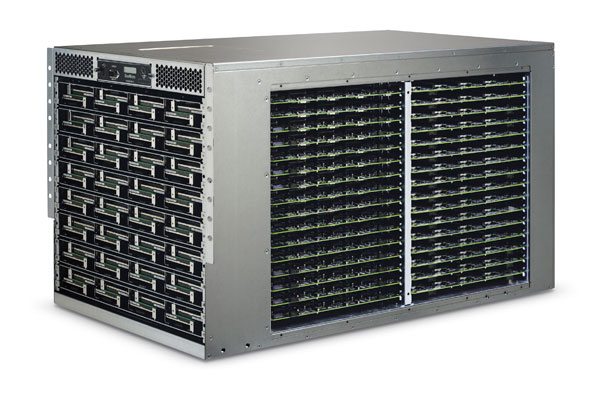 Since each Atom CPU is paired with 2GB of memory, the total machine has a terabyte of DDR2 memory. But like I said earlier, the memory isn’t shared so you have a 2GB maximum limit on each server. This in itself imposes a restriction on the type of applications you’ll run on a SM10000. If you need more than 2GB of memory per server in your rack, the SM10000 isn’t for you.

Poulsbo’s memory controller doesn’t support ECC, which is fine for MIDs but can be a problem for some enterprise customers. SeaMicro claims that most of its customers aren’t bothered by the lack of ECC. There’s no hope for future ECC support unless Intel eventually embraces the Atom platform for servers.

SeaMicro not only wants to replace some of your server hardware with its boxes, but also some of Cisco’s networking equipment. A single SM10000 is designed to replace your top rack switch.

The idea is you’d take the uplink provided to your backbone and plug it directly into one of the ports on the back of the SM10000. All load balancing, terminal server and switching functionality is handled by the SM10000 itself. It’s all Linux based so you should be able to add a firewall as well. 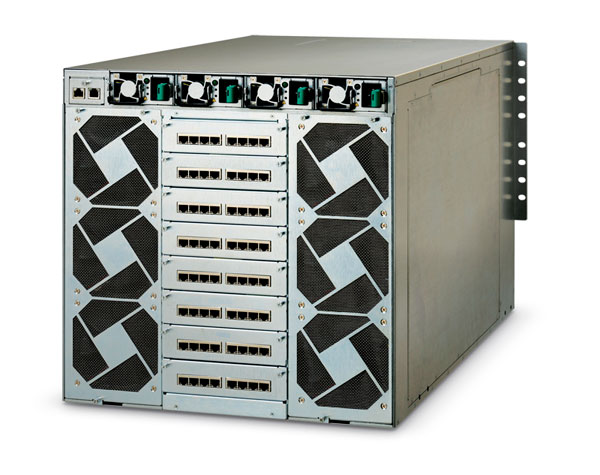 On the back of the machine you’ll see rows of ethernet ports, up to 64 to be exact. On each one of these cards is a separate CPU that is used to handle all of the network functionality of the server. It helps SeaMicro justify the pricing of the server as you’re replacing not only your server hardware but also some expensive networking gear. 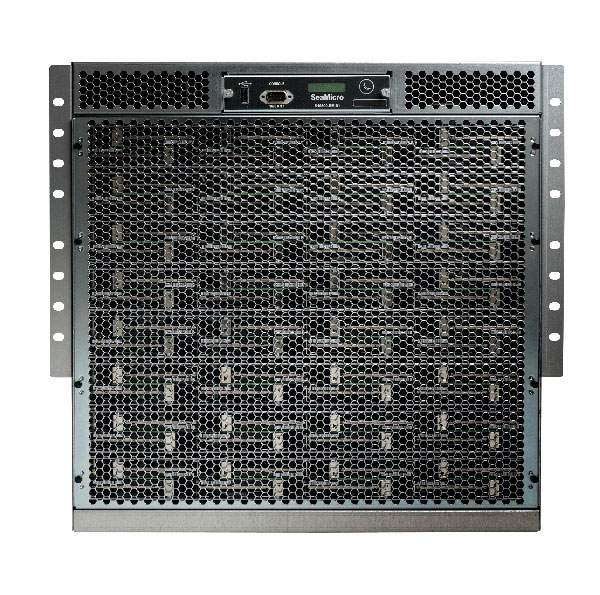 The networking is fully virtualized so each Atom “server” gets its own IP address and thinks it has its own connection to the outside world.

SeaMicro’s ASIC virtualizes four SATA ports per Atom processor. The SM10000 can support up to 64 physical 2.5” HDDs or SSDs. The customer will configure the machine to determine what four physical disks or slices of disks will map to each Atom CPU.

The SM ASIC emulates RAID-0, but nothing more. SeaMicro states this is because its target market is to replace dozens of simple servers that have limited or no storage. If you’re replacing a couple hundred web servers that only use their storage for OS and little else, the SeaMicro approach makes sense.

Linux is fully supported today but currently there’s no official Windows support. SeaMicro claims the box works just fine running a VM with Windows Server installed however Microsoft doesn’t officially support the configuration. SM is working with Microsoft on fixing that but for now, if you want support, you need to be running Linux.