Apple's iPad A4 SoC: Faster than the Nexus One's Snapdragon?

Fresh out the frying pan and into the fire, I just finished my Nexus One review late last night only to have my iPad preorder show up early this afternoon. I had been preparing for it's arrival not by downloading apps but by figuring out what comparative benchmarks I wanted to run on the iPhone 3GS and Nexus One. 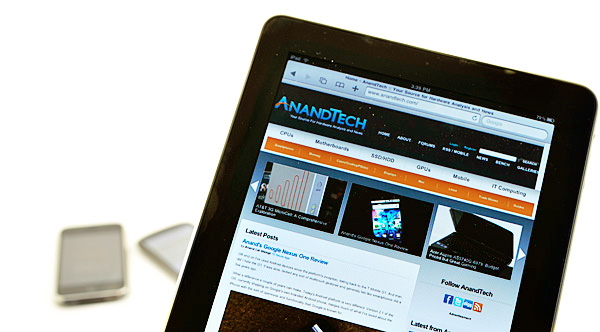 As the first device to use Apple's A4 SoC I wanted to see how it stacked up against the Cortex A8 and Qualcomm's QSD8250. All three chips appear to be dual issue in order architectures with varying pipeline depths, clock speeds and cache sizes.

At 600MHz the Cortex A8 in the iPhone 3GS is the slowest out of the bunch. The Snapdragon is much faster as we just established thanks in part to it's 1GHz clock speed. But what about Apple's 1GHz A4? 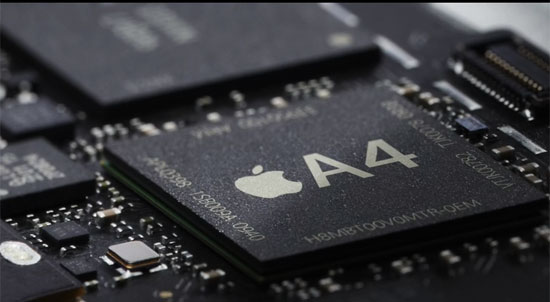 There's very little we know about the A4 other than it's operating frequency. It is manufactured by Samsung but on an unknown process node. Jon Stokes recently stated that Apple's secrecy surrounding the chip is because it isn't anything special, just a Cortex A8. If that is true, I suspect that it would have to be manufactured at 45nm in order to reach such a high clock speed.

With a new silicon mask there's also the chance that Apple moved to LPDDR2 to boost memory bandwidth; a change that most SoC makers are planning to make this year.

So how does Apple's A4 stack up against today's favorite smartphone brainchild? Keep in mind that these results are generated by running two different OSes (Android 2.1 and iPhone OS 3.2) and two different browsers. What we're looking at is the performance delivered by the combination of the CPU and the software stack:

Unless otherwise specified, I loaded the full version of all of the websites above (the exception being CNN, where I used the mobile site). To ensure reliability, I ran all of these tests at least 5 times, threw out any outliers and averaged the rest. The rests were also run at around the same time to ensure that content on the sites was as similar as possible (and thus shouldn't be compared to this morning's Nexus One results). You'll note that the Engadget results are a bit odd. It looks like the iPhone and Nexus One scores are bottlenecked somewhere else (there seemed to be some network issue plaguing the loads, but it wasn't present on the iPad), but if you toss out the very large differences you end up with what I believe to be the real story here. Update: Flash wasn't enabled on any device (not supported on iPad/iPhone, not officially available on Android yet), and all three devices connected to the same WiFi network.  The Apple devices used mobile Safari, while the Android device used the Android Browser.  Both are WebKit based but there are obvious, unavoidable software differences.

Removing the AnandTech, Ars Technica and Engadget loads (which were repeatable, but unusually long) the iPad loads web pages 10% faster than the Nexus One. If you include those three results the advantage grows to 22.5%. I'd say somewhere in the 10% range is probably realistic for how much faster the A4 is compared to the Snapdragon.

I also ran the official WebKit SunSpider JavaScript Benchmark on all three platforms to give us a network independent look at real world JavaScript performance: 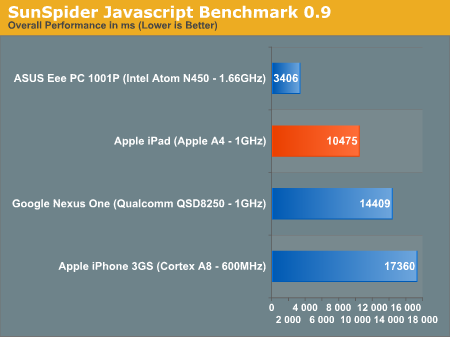 If we take the network out of the equation, the A4 in the iPad has a 37.6% performance advantage over the Qualcomm QSD8250. This actually supports some of the larger performance differences we saw earlier. If Apple can manage to deliver this sort of performance in its smartphone version of the A4, we're in for a treat.

The why is much more difficult to ascertain. It could be as simple as the the iPad OS being better optimized than Android, a definite possibility given how much longer Apple has been working on it compared to Google. The advantage could also be hardware. The A4 may boast higher IPC than Qualcomm's Snapdragon thanks to better core architecture, larger caches or a faster memory bus. The likely case is somewhere in between, where the iPad's advantage comes from a combination of hardware and software. 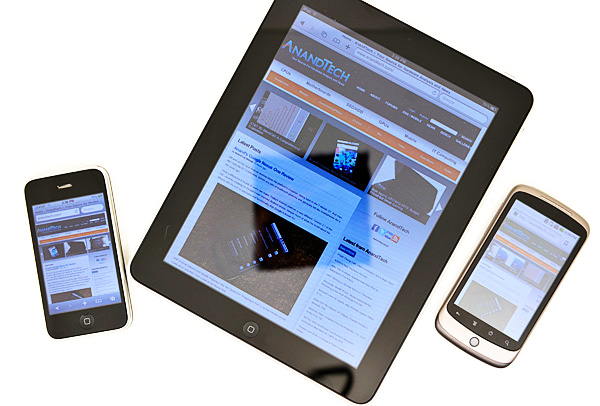 It could also be a power optimization thing. The A4 in the iPad is paired with a much larger battery than the QSD8250 in the Nexus One, Apple may be able to run the SoC at more aggressive performance settings since it doesn't have to worry about battery life as much. Either way the one thing we can be sure of is Apple's A4 SoC is much more like a 1GHz Cortex A8 rather than anything more exotic. Good work Jon :)

I should note that while the performance improvement is significant, it's not earth shattering. Despite the early reports of the iPad being blazingly fast, I found it just "acceptable" in my limited time with it thus far. I'll go into greater detail in my full review later.

This does bode well for the upcoming 4th generation iPhone, which is widely expected to also use the Apple A4 SoC. That upgrade alone should put the next iPhone ahead of Google's Nexus One in performance, assuming that it offers the same performance as it does in the iPad. Pair it with a modernized and feature heavy iPhone OS 4.0 and we might see an Apple answer to Android in 2010.

The A4 is particularly exciting because it combines Snapdragon-like CPU performance with a PowerVR SGX GPU. A much better option than the aging ATI core used in Qualcomm's QSD8x50 series.

With Apple showing its A4 performance this early, Qualcomm also has a target to aim at. The first single-core 45nm Snapdragon SoC due out in 2010 will run at 1.3GHz. That could be enough to either equal or outperform Apple's A4 based on what we've seen here today.

Expect our full review of Apple's iPad as well as more discussion about the A4 next week. Have a great weekend guys.