A few weeks back I introduced you all to a tool I’d been working on for a while called Bench.

Bench, in its current form, is a database of CPU performance data allowing you to compare virtually any modern day desktop CPUs. With the recent launch of the Core i7 975 and the Athlon II X2 processors there are now 78 individual CPUs represented in Bench.

In my introductory post I asked what sort of older CPUs you’d like to see included. The top suggestions were as follows:

You asked, and I delivered. Well...I started to at least.

The first chip I added was the Pentium 4 660. Based on Intel’s Prescott core, the 660 was a single-core Pentium 4 with Hyper Threading enabled. In today’s more threaded world, HT is more useful than when the 660 first came out. The chip runs at 3.6GHz and was built on a 90nm process. 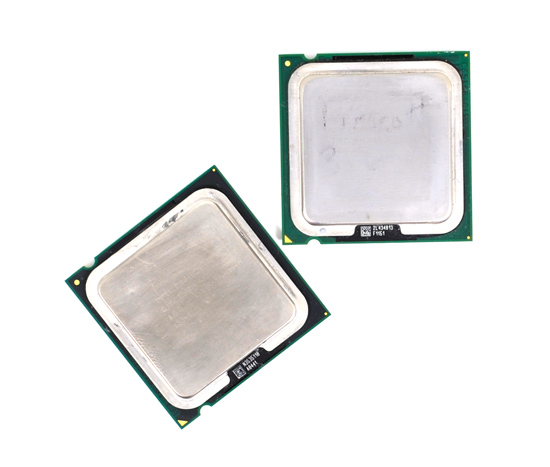 The second chip I added was the Pentium Extreme Edition 955. This was one of the fastest processors ever made in the Pentium 4 era, only bested by the Pentium EE 965. Take two 65nm Cedar Mill die put them on the same package and you’ve got a dual-core Presler. With 376 million transistors the Pentium EE 955 ran at 3.46GHz and thanks to its Hyper Threading support, could execute four threads at the same time.

Intel was right about threading being the future. The quad-threaded Pentium EE 955 fared much better today than I expected, partly due to its ability to juggle more threads. The Pentium E5300 is significantly faster in many areas (40%+ in some tests), but surprisingly there are some situations where the golden oldie is close. Fallout 3 has the Pentium EE 955 within 10% of the E5300, as did the multi-threaded PAR2 test. Overall you’d see a significant performance improvement going to a $70 CPU. Although you may never again spend $1000 on a CPU if you decide to pursue that upgrade.

Lynnfield and then SSDs

In my last Lab Update I talked about working on SSDs, unfortunately I had to leave out the part about me working on a preview of Intel's Lynnfield processor. I must say that the Lynnfield testing went much better than I expected. I had the whole thing wrapped up in under a day and didn't have a single crash or performance issue to try and resolve.

Compared to my early Nehalem testing, Lynnfield actually fared even better. While my first Nehalem ran at higher clock speeds, the first Nehalem motherboards had issues with memory performance. Lynnfield worked very well for what I was testing, although I did hear that CrossFire/SLI weren't working very well on those early platforms.

I am curious to see how Intel manages the LGA-1156 vs. LGA-1366 platform split. Intel claims to be committed to LGA-1366 but I do see a lot of potential in LGA-1156; I believe it'll be a difficult job to maintain both platforms without artificially crippling one. We'll see if Intel is up to the task later this year.

My SSD testing is progressing well. There are a couple of items worth reporting on.

OCZ is expected to have TRIM support on its Vertex drives shortly, potentially within the next month from what I've read on their forums. Samsung's latest drive will have TRIM support once Microsoft has released Windows 7; I'm guessing that means September/October.

Intel is remaining curiously quiet on the TRIM issue. I would like to see the existing X25-M drives retrofitted with TRIM as I think that would be a tremendous goodwill gesture on Intel's part; I get that the X25-M is already the fastest thing on the market, but that's no reason to avoid thanking your customers for their support in my mind.

I've been testing the OCZ Vertex 30GB and 60GB drives fairly thoroughly over the past couple of weeks and I've got some early data to report.

1) The 30GB and 60GB drives are about 20 - 35% slower in sequential read and write speed than the 120GB drives.
2) Small file random read/write speed is unaffected. The entire lineup of Vertex drives, regardless of size, performs the same when dealing with small file random access.
3) As a result, real world performance is mostly unaffected by going for a smaller drive. PCMark scores are only around 4 - 5% lower on the smaller drives.

You should have no issues opting for a smaller Vertex drive, but the 120GB drive continues to be a better buy. Not only do you get better performance, but from what I've seen you get a much lower cost per GB than the smaller drives. OCZ's 30GB Vertex actually has a cost per GB greater than Intel's X25-M.

Expect more of this in my upcoming SSD article.