All this talk about setting standards and assisting companies develop products that meet those stringent standards is well and good, but what’s involved in the testing process?

THX has both audio and video labs at their San Rafael, California facility. The audio labs include an anechoic chamber, studio space and test equipment. The HDTV test lab consists of two separate labs. One large space can be completely darkened, and is used to test panel uniformity, color tracking, color temperature and other parameters. The main instrument is a Konica-Minolta CS-2000 spectroradiometer, used to measure contrast ratios, color temperature and related specs. Also on tap is a high end digital camera back used to measure panel uniformity. 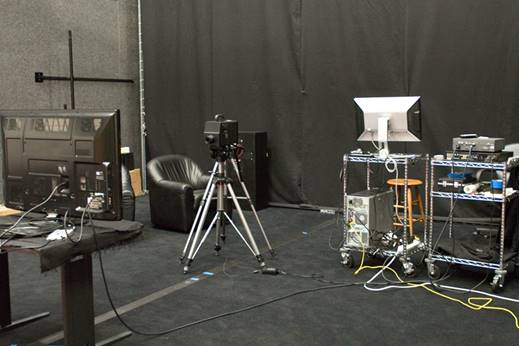 A panel manufacturer begins with very early samples, often lacking amenities like bezels, in order to start dialing in the electronics. At the beginning, the result may be pretty poor.

Over time, the panel electronics are tweaked, software updates written and all the various pieces are tuned to bring the final result close to that magical linearity.

The second lab is the subjective test lab. Tests that require visual inspection, like anti-aliasing performance, happen in this lab. While some actual content from film and video sources is viewed as a sort of final sanity check, most of what occurs is visual inspection of test patterns. Some of the testing is more aggressive than publicly available tests. For example, it’s possible that an HDTV panel might pass the publicly available HQV benchmark for anti-aliasing, but fail on the THX test.

The bottom line: there’s a ton of testing and tweaking that goes on before an HDTV receives THX video certification. How does this play in the real world? Let’s take a look at a case study.

LG makes a number of THX certified HDTV. The current high end of their LCD line is the LG 55LH90. This is a zone-backlit LCD using LED backlighting. In addition to THX certification, the unit offers two “ISF” settings. (ISF is the Imaging Science Foundation, which trains and certifies custom installers for home theater video calibration work.)

LG loaned me a 55LH90 to try out in my living space, so what I’ll be discussing isn’t some unit in an ideal lab, but one in my viewing room. My family room has a large glass patio door on one side, and overhead lighting which isn’t dimmable. It’s a 15’ x 15’ area, with the main seating about 7 feet back from the HDTV.

The LG unit offers a THX setting, which is set to about 130 cd/m2, with zone backlighting enabled. It’s worth discussing the differences between the THX settings and the ISF menu entries.

The THX setting is tuned for film material, though certainly works well on standard HDTV content as well. It’s a “what you see is what you get” setting. In fact, many of the normally tweakable settings are grayed out. You can think of the THX setting as a sort of pre-calibrated setting suitable for relatively light controlled viewing environments. 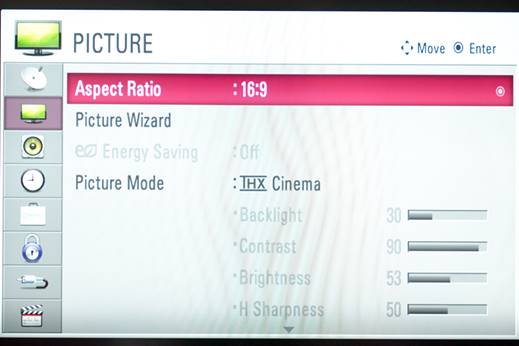 Note how much the backlighting is dialed down – it’s set to 30%. The THX setting also disables high refresh rate and dynamic contrast ratio settings.

The ISF settings, on the other hand, are there specifically for tweaking by professional calibrators, though users are certainly free to change them as well; these are not hidden under some special factory code. 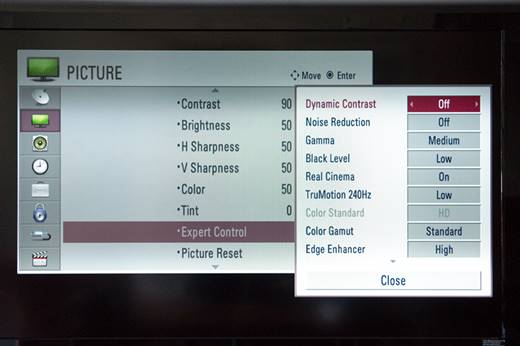 Interestingly, the 55LH90 also has a simple, but useful, calibration routine built into the menu system. If you don’t like any of the out-of-the-box settings, but don’t want to pay for custom calibration, then you can use the built in tools to perform a good, first level calibration. As with similar tools on the PC, you’re walked through a series of screens which allow you to tweak black levels, brightness and color best suited to your viewing tastes and environment. 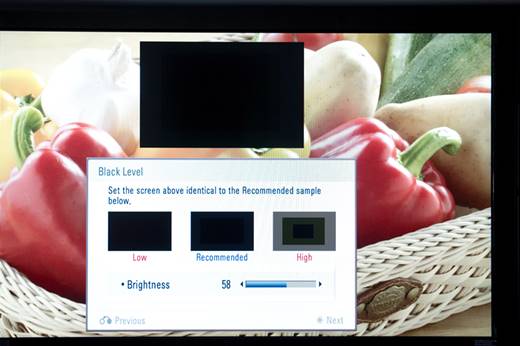 The THX mode looks stunning to my eyes -- particularly with movie and episodic TV content. Blu-ray movies, in particular, offer up impressive black levels and terrific detail. I’ve seen a lot of LCD TVs, and have always leaned towards plasmas. No LCD TV has ever really satisfied my viewing tastes – until now. I can safely say that this LG unit is the best LCT HDTV I’ve seen to date. Even viewing angles seem better than past LCDs I’ve viewed – but bear in mind my 15x15 space means no one really sits at steeper off-axis angles.

Since most of our HDTV viewing is in the evening, light control really isn’t an issue. Even during sunny daylight, though, the brightness seems adequate in THX mode. While we do have a large sliding glass door, we never get direct sunlight into the room.

I’ve tweaked settings for other types of material. I’ve been watching the Winter Olympics in high def recently. While THX mode is sufficient, it’s not really enough, and tweaking the settings – including enabling the higher frame rate – makes viewing that type of content more enjoyable. Interestingly, the “Sports” preset was too bright for Olympics, though it did look fine when watching the Super Bowl.

Given my experience, the LG unit gets a definite thumbs up. But my experience with THX mode isn’t mirrored by others. CNET’s test lab found THX mode to be quite blue . That wasn’t reflected in the THX mode I saw, which had no visible blue cast, as an 8200K average color temperature would indicate. That points to potential product quality inconsistencies or perhaps a firmware update on my version.

There is, of course, a price premium, though not as much as you’d suspect. Recent price checks show the LG 55LH90 priced at a around $2,000. That’s not out of line for 55-inch premium HDTVs. Some Samsung and Sony units can cost quite a bit more. So for your $2K, get an excellent LCD HDTV with zone LED backlighting (not edge backlit) and a THX preset that serves quite well for movie watching. On top of that, you can tweak almost every setting to your heart’s content.