Today Intel started talking about its ISSCC plans and included in the conference call were some details on Westmere that I previously didn't know. Most of it has to do with power savings, but also some talk about 32nm quad-core Westmere derivatives!

Westmere is Intel’s 32nm Nehalem derivative. Take Nehalem with all of its inherent goodness, add AES instructions, build it using 32nm transistors and you’ve got Westmere.

We just recently met the first incarnation of Westmere - Clarkdale, the dual-core processor that’s been branded the Core i3 and Core i5. Later this quarter we’ll meet Gulftown, a six-core Westmere that’ll be sold under the Core i7 label. All of that is old news, now for the new stuff.

With Nehalem Intel started power gating parts of the chip. Stick a power gate transistor in front of the supply voltage to each core and you can effectively shut off power (including leakage power) to the core when it’s not in use. This was a huge step in increasing power efficiency, something that’s evident when you look at Nehalem idle power numbers. 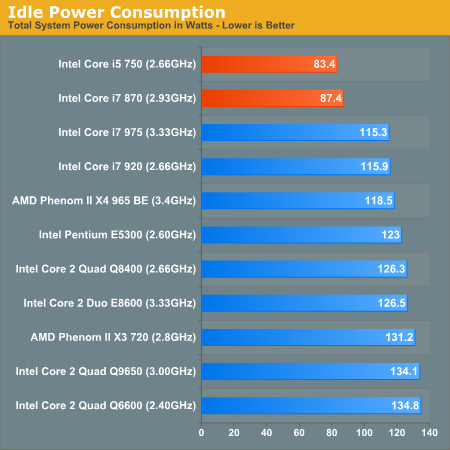 When you shut off a core you need to save the core’s state so that when it wakes back up it knows what to do next. Remember that power down these cores can happen dozens of times in the course of a second. The cores can’t wake up in a reboot state, they need to simply shut off when they’re not needed and wake back up to continue work when they are needed.

In Nehalem the core’s state (what instruction it’s going to work on next, data in its registers, etc...) is saved in the last level cache - L3. Unfortunately this means that the L3 cache can’t be powered down when the cores are idle, because that’s where they store their state information. Take this one step further and it also means that Nehalem’s L3 cache wasn’t power-gated.

In Westmere, Intel has added a dedicated SRAM to store core state data. Each core dumps its state information into the dedicated SRAM and then shuts off. With the state data kept out of the L3 cache, Westmere takes the next logical step and power gates the L3.

Intel lists this dedicated SRAM as a Westmere-mobile feature, there’s a chance it’s not present on the desktop chips. But it makes sense. Without a way of powering down the L3 cache, Westmere would be a very power hungry mobile CPU. Westmere appears to make it mobile-friendly.

The last bits of information Intel revealed have to do with its high end desktop/workstation/server intentions with Westmere. The 6-core Westmere is a 240mm^2 chip made up of 1.17B transistors: 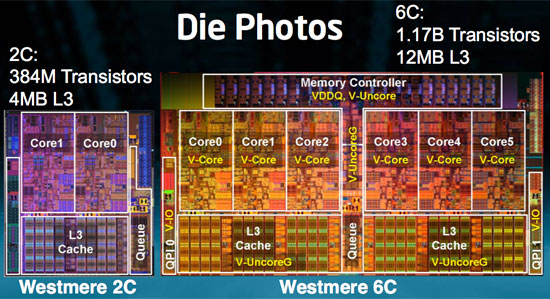 That’s six cores on a single die, but with 12MB of L3 cache. Remember that Nehalem/Lynnfield have 8MB and Clarkdale has 4MB. Nehalem’s chief architect, Ronak Singhal told me that he wanted to maintain at least 2MB of L3 per core on the die. A 6-core Westmere adheres to that policy.

The chip works in existing LGA-1366 sockets, so you still have three DDR3 memory channels. 6C Westmere does support both regular DDR3 (1.5V) as well as low voltage DDR3 (1.35V). This is particularly useful in servers where you’ve got a lot of memory present, power consumption should be noticeably lower. 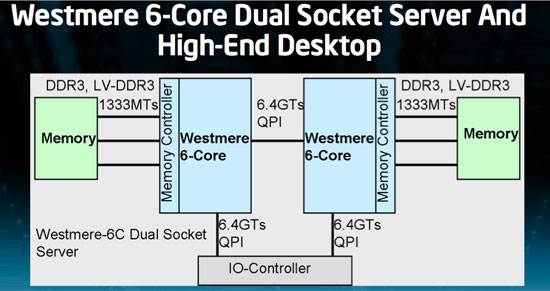 The other big news is that Intel will be releasing 4-core variants of Westmere as well. While I originally assumed this would mean desktop and server, Intel hasn't committed to anything other than a quad-core Westmere. These parts could end up as server only or server and desktop.

The table below shows you the beauty of 32nm. Smaller die, more transistors:

It also shows that there's a definite need for Intel to build a quad-core 32nm chip. Die sizes nearing 300mm2 aren't very desirable. The question is whether we'll see quad-core 32nm in 2010 desktops or if we'll have to wait for Sandy Bridge in 2011 for that.