Where AFR Is Mediocre, and How Hydra Can Be Better

Perhaps it’s best that we first start with a discussion on how modern multi-GPU linking is handled by NVIDIA and AMD. After some earlier experimentation, both have settled on a method called Alternate Frame Rendering (AFR), which as the name implies has each card render a different frame.

The advantage of AFR is that it’s relatively easy to implement – each card doesn’t need to know what the other card is doing beyond simple frame synchronization. The driver in turn needs to do some work managing things in order to keep each GPU fed and timed correctly (not to mention coaxing another frame out of the CPU for rendering).

However even as simple as AFR is, it isn’t foolproof and it isn’t flawless. Making it work at its peak level of performance requires some understanding of the game being run, which is why for even such a “dumb” method we still have game profiles. Furthermore it comes with a few inherent drawbacks

Despite those drawbacks, for the most part AFR works. Particularly if you’re not highly sensitive to lag or microstuttering, it can get very close to doubling the framerate in a 2-card configuration (and less efficient with more cards).

Lucid believes they can do better, particularly when it comes to matching cards. AFR needs matching cards for timing reasons, because it can’t actually split up a single frame. With Hydra, Lucid is splitting up frames and gives them two big advantages over AFR: Rendering can be done by dissimilar GPUs, and rendering latency is reduced.

So how does the Hydra work? We covered this last year when Lucid first announced the Hydra, so we’re not going to cover this completely in depth again. However here’s a quick refresher for you. 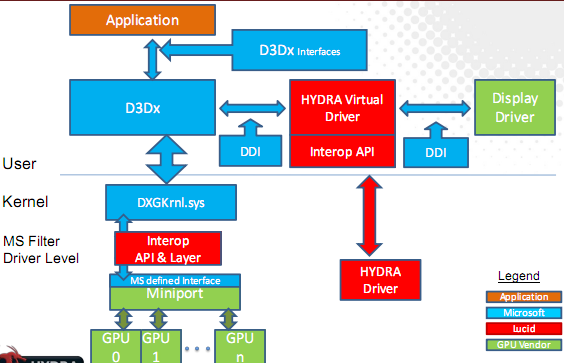 As the Hydra technology is based upon splitting up the job of rendering the objects in a frame, the first task is to intercept all Direct3D or OpenGL calls, and to make some determinations about what is going to be rendered. This is the job of Lucid’s driver, and this is where most of the “magic” is in the Hydra technology. The driver needs to determine roughly how much work will be needed for each object, also look at inter-frame dependences, and finally look at the relative power of each GPU.

Once the driver has determined how to best split up the frame, it then interfaces with the video card’s driver and hands it a partial frame composed of only the bits it needs to render. This is followed by the Hydra then reading back the partial frames, and compositing them into one whole frame. Finally the complete frame is sent out to the primary GPU (the GPU the monitor is plugged into) to be displayed. 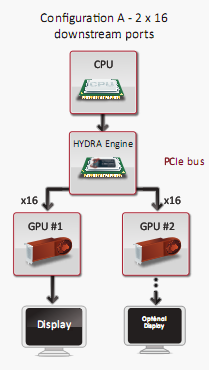 All of this analysis and compositing is quite difficult to do (which is in part why AMD and NVIDIA moved away from frame-splitting schemes) which is what makes Hydra’s method the “hard” method. Compared to AFR, it takes a great deal more work to split up a frame by objects and to render them on different GPUs.

As with AFR, this method has some drawbacks: 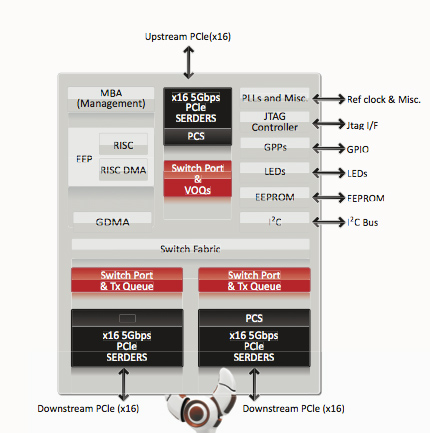 This is also a good time to quickly mention the hardware component of the Hydra. The Hydra 200 is a combination PCIe bridge chip, RISC processor, and compositing engine. Lucid won’t tell us too much about it, but we know the RISC processor contained in it runs at 300MHz, and is based on Tensilica’s Diamond architecture. The version of the Hydra being used in the Fuzion is their highest-end part, the LT24102, which features 48 PCIe 2.0 lanes (16 up, 32 down). This chip is 23mm2 and consumes 5.5W. We do not have any pictures of the die or know the transistor count, but you can count on it using relatively few transistors (perhaps 100M?)

Ultimately in a perfect world, the Hydra method is superior – it can be just as good as AFR with matching cards, and you can use dissimilar cards. In a practical world, the devil’s in the details.