A Look at the Hydra Software

At the center of all of this is the Hydra software, which as we said before is where much of the magic is happening. 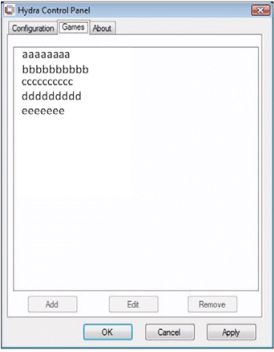 Once installed, the Hydra software sets up a control panel that allows the user to enable/disable the Hydra feature, and to adjust game profiles.

At its highest level, the Hydra software is generic. It looks at just D3D/OpenGL commands and decides where to go from there. However the process isn’t perfect, and a lot of games encounter errors with the current drivers. So in order to keep the Hydra feature from being enabled on games that can’t handle it, Lucid keeps a list of approved games, which are built into the software as profiles.

Think of this as lite-profiles however. The profiles are simply a list of executables that the Hydra feature has been tested on and approved; the profiles aren’t a list of game-specific optimizations like NVIDIA and AMD’s game profiles are, and as far as we can tell Lucid isn’t doing any other game detection in the drivers, so it’s as generic as they claim. To this extent, the profiles serve largely as a list of recommended games, rather than an absolute list. You can easily add additional game profiles to the list, however there’s obviously no guarantee that they will work correctly with the Hydra.

The latest version of the Hydra driver is version 1.4, which was released this past week. The Fuzion board is shipping with 1.3, while the 1.4 drivers will be available for download.

Currently only Direct3D 9, 10, 10.1, and OpenGL are supported. The Hydra software does not support DirectX 11 (not that you currently have a lot of cards to choose from), which is something Lucid will be adding in March with the 1.5 drivers. Also coming in the 1.5 drivers will be much more generic support for video cards. Right now the software only supports video cards on a hardcoded list (e.g. the 1.3 drivers didn’t know about the Radeon 5000 series), with the 1.5 drivers they will recognize and support every card within an entire family, including unreleased cards. So a Radeon 5860 for example would be supported, which means the drivers won’t be out of date the moment someone releases a minor new card variant.

Speaking of new releases, we asked Lucid about what the software support policy is for the Hydra. They are planning on quarterly releases (1.4 being their Q4’09 release), which worries us somewhat. The issue is that the Hydra technology runs the risk of being out of date for months at a time. When NVIDIA launches Fermi, it won’t immediately work with the Hydra. If a hot new game comes out and doesn’t already work with the Hydra, you’ll have to wait. Lucid has said that they’re willing to do minor drops if a situation particularly demands it, but it’s not a concrete promise like quarterly driver releases are. And to be fair we encounter these things with NVIDIA and AMD as well, but AMD and NVIDIA have proven to be fairly reliable in getting beta/hotfix drivers out when it counts.

For anyone curious, Lucid has said that it takes them on average a couple of weeks of work on their end to build in support for a new family of video cards. When Fermi is released, potentially it may be supported by the Hydra in a short period of time.

The unfortunate state of reality for the Hydra technology right now is that the game support is still rather limited. In the last month Lucid has been putting most of their effort into getting X-Mode working (in the 1.3 drivers, it only worked on a couple of games, now it’s 40+) since X-Mode only became possible later last year with the launch of Windows 7. A-Mode and N-Mode are better supported than X-Mode, with between 60 and 70 games supported depending on the specific mode.

Besides working on X-Mode, Lucid has been working on various games based on a triage list of sorts to decide what gets added first. They’re effectively adding games based on their popularity & sales, which means that many popular games are already on the list.

Under normal circumstances we would agree with this list, but launching the Hydra with the Fuzion first presents us with an odd situation. Most popular games aren’t graphically intensive games, but the Fuzion is quite the expensive motherboard. What this means is that we can’t imagine anyone is going to pair the Fuzion with anything less than an equivalently-priced video card, which at this point in time would be the Radeon 5850. The Radeon 5850 runs just about everything well, in fact it’s a challenge for us to come up with things it doesn’t run well. The things it doesn’t run well, like Crysis and Battleforge, aren’t fully-supported games. So the Hydra is of limited utility at this point in time if it can’t be used to pair up powerful cards on graphically intensive games.