TWiT's Colleen Kelly pestered me on twitter to run tests on a 3 x 30" Eyefinity setup. The problem with such a setup is twofold:

The second issue is bigger than you think, there are currently no 30" displays that accept a mini DP input, only regular DP. And to convert a miniDP to DP/DL-DVI, you need an active adapter, a bit more expensive than a standard converter cable. Apple makes such a cable and sells it for $99. The local store had one in stock, so I hopped in the batmobile and got one. Update: AMD tells us that in order to use all three outputs, regardless of resolution, you need to use an active adapter for the miniDP output because the card runs out of timing sources.

Below we have a passive mini-DP to single-link DVI adapter. This is only capable of driving a maximum of 1920 x 1200: 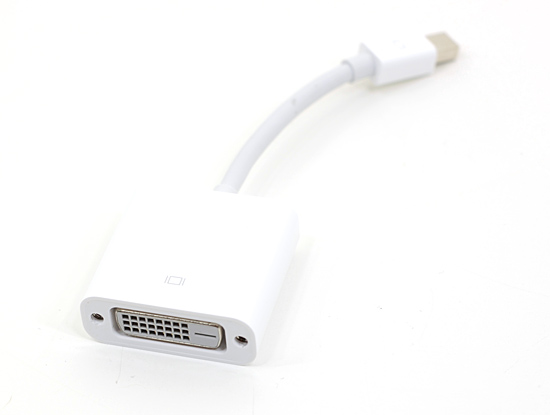 This cable works fine on the Radeon HD 5970, but I couldn't have one of my displays running at a non-native resolution. 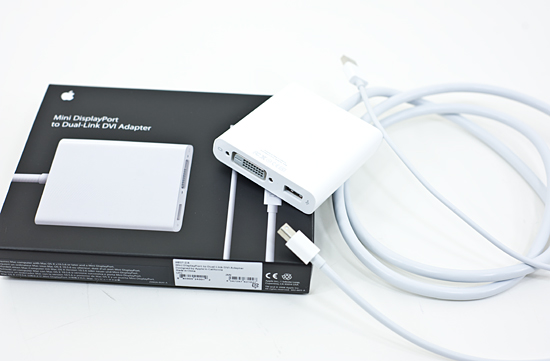 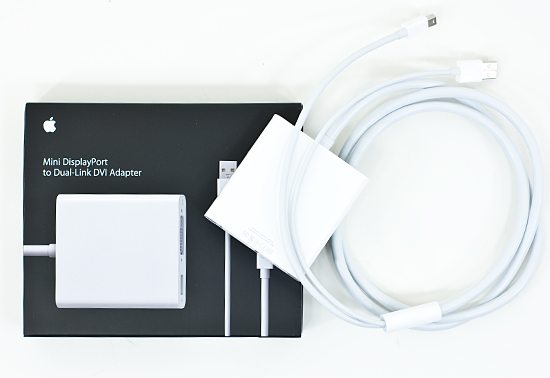 User reviews are pretty bad for this adapter, but thankfully I was using it with a 30" Apple Cinema Display. My experience, unlike those who attempt to use it with non-Apple monitors, was flawless. In fact, I had more issues with one of my Dell panels than this Apple. It turns out that one of my other DVI cables wasn't rated for dual-link operation and I got a bunch of vertical green lines whenever I tried to run the panel at 2560 x 1600. Check your cables if you're setting up such a beast, I accidentally grabbed one of my DVI cables for a 24" monitor and caused the problem. 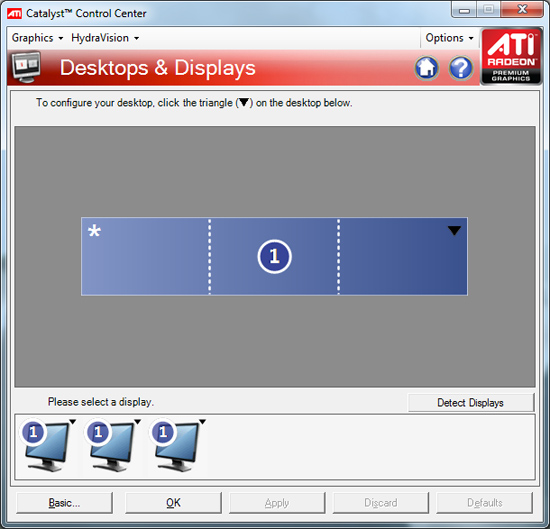 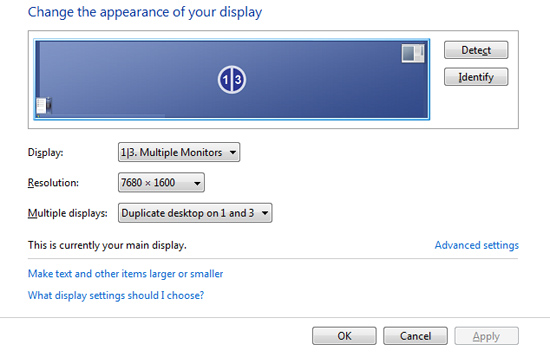 Windows detected all of the monitors, I used the Eyefinity configuration tool to arrange them properly, grabbed a few 7680 x 1600 wallpapers and was at a super wide Windows desktop. 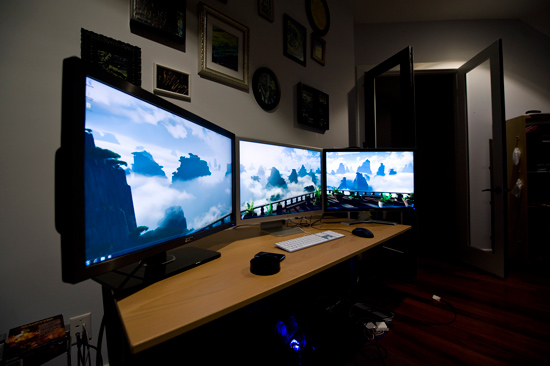 The usual Eyefinity complaints apply here. My start menu was around 3 feet to the left of my head and the whole setup required nearly 6 feet of desk space. 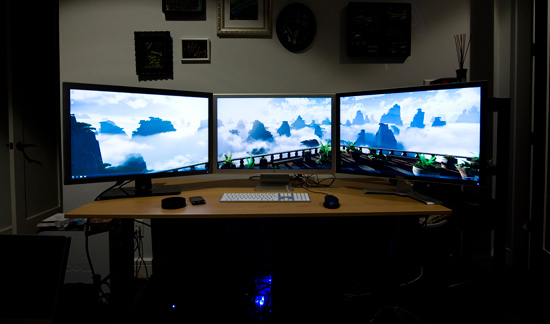 In game menus and cutscenes are also mostly borked. They are fixed resolution/aspect ratio and end up getting stretched across all three 30" panels. Case in point is Call of Duty Modern Warfare 2: 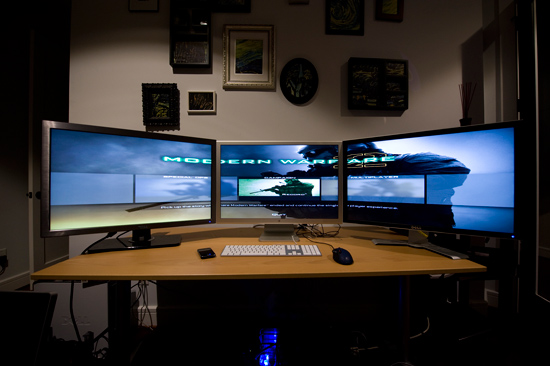 While most games will run at the 7680 x 1600 resolution enumerated by ATI's driver, they don't know how to deal with the 48:10 aspect ratio of the setup (3 x 16:10 displays) and apply the appropriate field of vision adjustments. The majority of games will simply try to stretch the 16:10 content to the wider aspect ratio, resulting in a lot of short and fat characters on screen (or stretched characters in your periphery). Below is what MW2 looks like by default: 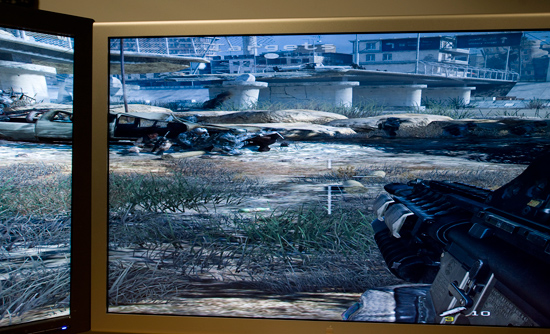 All of the characters look like they have legs that start at their knees. Thankfully there's a little tool out there that lets you automatically correct aspect ratio errors in some games. It's called Widescreen Fixer and you can get it here.

Select your game, desired aspect ratio and just leave it running in the background while you play. Hitting semicolon will enable/disable the aspect ratio correction and result in a totally playable, much less vomit inducing gaming experience. Below we have MW2 with correct aspect ratio/FOV: 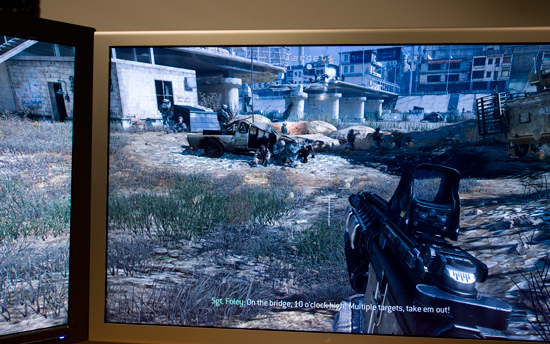 Take note of how much more you can see as well as normal the characters now look. Unfortunately Widescreen Fixer only supports 11 games as of today, and four of them are Call of Duty titles:

There's absolutely no reason for ATI not to have done this on its own. There's a donate link on the Widescreen Fixer website, the right thing for ATI to do would be to pay this developer for his work. He's doing the job ATI's Eyefinity engineers should have done from day one. Kudos to him, shame on ATI.

Performance with 3 x 30" displays really varies depending on the game. I ran through a portion of the MW2 single player campaign and saw an average frame rate of 30.9 fps with a minimum of 10 fps and a maximum of 50 fps. It was mostly playable on the Radeon HD 5970 without AA enabled, but not buttery smooth. Turning on 4X AA made Modern Warfare 2 crash in case you were wondering. The fact that a single card is even remotely capable of delivering a good experience at 7680 x 1600 is impressive.

I also noticed a strange issue where I couldn't get my video to sync upon any soft reboots. I'd need to shut down the entire system and turn it back on for me to see anything on the screen after a restart.

With corrected aspect ratios/FOV, gaming is ridiculous on such a wide setup. You really end up using your peripheral vision for what it was intended. The experience, even in an FPS, is much more immersive. Although I do stand by my original take on Eyefinity, the most engulfing gameplay is when you find yourself running through an open field and not in games that deal with more close quarters action.

Just for fun i decided to hook my entire 3 x 30" Eyefinity setup to a power meter and see how much power three 30" displays and a Core i7 system with a single Radeon HD 5970 would consume.

Under load while playing Modern Warfare 2 the entire system only used 517W. Which brings us to the next issue with Eyefinity on the 5970: most games will only use one of the GPUs. Enabling Eyefinity with Crossfire requires a ridiculous amount of data to be sent between the GPUs thanks to the ultra high resolutions supported. Doing this isn't quite that easy given some design tradeoffs made with Cypress (more on this in an upcoming article). Currently, only a limited number of titles will support the 5970 running in dual-GPU mode with Eyefinity. Dual-card owners (e.g. 5870 CF) are out of luck, the current drivers do not allow for CF and Eyefinity to work together. This will eventually get fixed, but it's going to take some time. With a second GPU running you can expect total system power consumption, including displays, to easily break 600W for the setup I used here.

The difficulties most games have with such a wide setup prevent 3 x 30" Eyefinity (or even any triple-monitor configuration) from being a real recommendation. If you have three monitors, sure, why not, but I don't believe it's anywhere near practical. Not until ATI gets a lot of the software compatibility taken care of.