Below the 5770, we have the 5750, the other card being launched today. This is a 700MHz card with 1 SIMD disabled, and the memory clock at 1.15GHz(4.6GHz effective). This represents an 18% decrease in core clock and the performance of all units tied to that clock, and a 10% further reduction in computational and texturing power due to the loss of a SIMD, for a total theoretical performance reduction of 26%. The ROP count remains unchanged at 16. 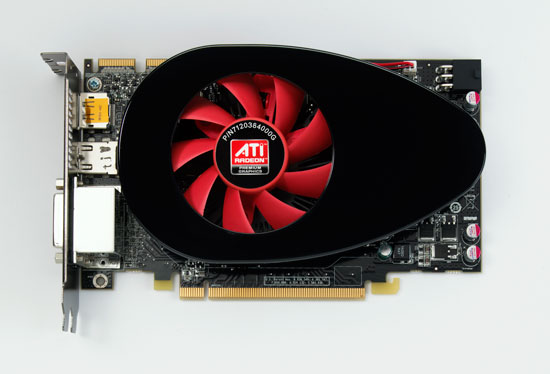 The 5750 will come with either 512MB or 1GB of RAM, depending on the target price, with no change in memory clocks. As is the case with 5770, we find the choice of memory speeds interesting since vendors still have to use the same speed RAM on the 5750 as they do the 5870 (boy this stuff must be cheap). No one makes 1.15GHz GDDR5, so vendors have no choice but to equip it with something faster. Our samples are using Hynix 1.25GHz modules, which means the 5750 and the 5770 should be capable of some easy memory overclocking (bus capabilities withstanding). At the moment no one makes 1.2GHz modules, so this may persist for some time.

Compared to the 5770, gone is the expensive Phoenix shroud, replaced with what we’re calling the “egg”. The egg is a simple circular heatsink with a 2-pin fan embedded in it, which sucks in air and pushes it out along the fins. The egg shape is brought about by the plastic cover at the top of the heatsink – we’re not sure if it’s just for looks or if it’s accomplishing some specific function. The card length is 7.15 inches, with no shroud to extend that. 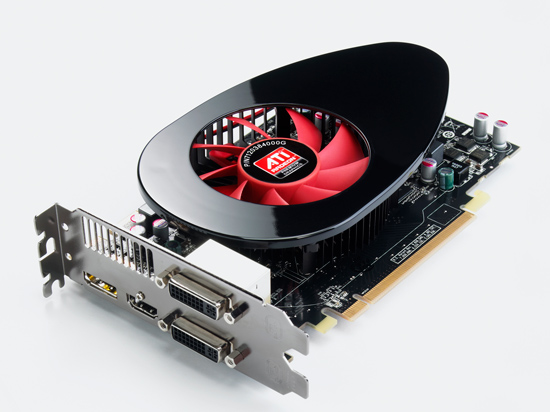 Once again we’ll see the same Eyefinity port configuration here; 1 DisplayPort, 1 HDMI, and 2 DVI. There’s still a half-slot vent here, but since the design of the cooler means that the card is blowing hot air in to the case instead of out the rear, it serves more as a window to look at the card. As a card with this performance level isn’t a good choice for gaming with Eyefinity, AMD is shooting at professional users with the Eyefinity capabilities of this card. We expect that this will be a bit harder of a sale, since Single Large Surface capabilities aren’t as critical with windowed programs, and the high price of DisplayPort->DVI dongles means that the dongle is as much as the card.

We should also note that it’s the desire to keep the Eyefinity port configuration that lead to the use of the egg cooler. For the second generation of cards, vendors are likely to drop the egg cooler for a single-slot cooler. Certainly the 5750 is cool enough at 86W TDP that it doesn’t need a dual-slot cooler.

As is the case with the 5770, the 5750 is expected to have “tens of thousands” of units available at launch, with any supply constraints likely to be the same between the two. The 1GB cards will come with DIRT 2 vouchers if the vender participates, the 512MB cards will not.