We utilize the Ranch Small demo file along with the Playback Action demo to see the differences between GPU and CPU centric benchmarks. The Ranch demo is GPU centric while the Playback demo tends to be CPU centric. We run each benchmark five times and report the median score. 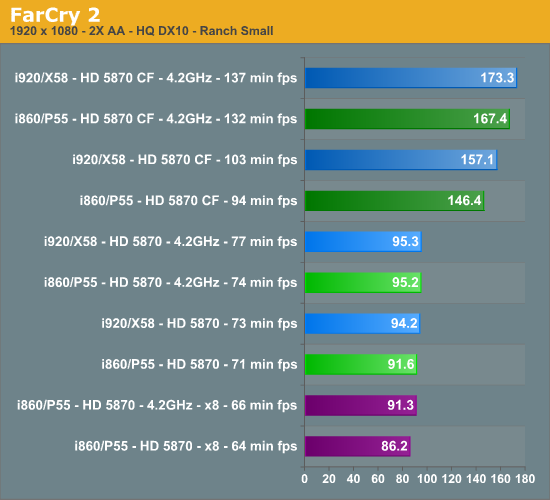 First off, FarCry 2 has always performed extremely well on the X58 chipset compared to other chipsets with the ATI video cards. This game responds very well to PCIe bandwidth, something the X58 has in droves. The stock HD 5870 single card x8 configuration is 6% slower in average frame rates and 10% slower in minimum frame rates in this particular benchmark. Even the 4.2GHz single card result is slower than either the stock P55 or X58 setups.

The stock single card HD 5870 P55 platform is 3% slower than the X58 even with a 100MHz processor advantage in turbo mode. At 4.2GHz, both platforms are about even although minimum frame rates are about 4% better on X58. However, even with this benchmark advantage, there was no difference in actual game play, especially considering minimum frame rates are above 70fps in each instance. 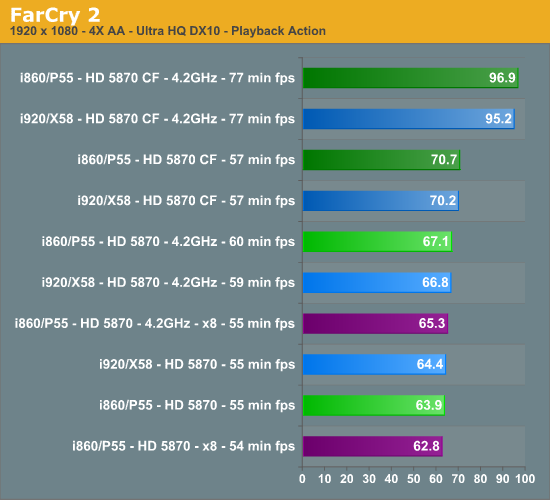 The P55 results improve slightly as we move to a more CPU centric benchmark. The stock HD 5870 single card x8 configuration is only 2% slower in average frame rates and only 1% in the overclocked results. Comparing single card results between the P55 and X58, we see a 2% difference in favor of the X58 at stock speeds while at 4.2GHz the P55 finishes slightly ahead of the X58.

The pertinent data for CrossFire scaling is in the tables below. What we are looking for is the percentage speedup going from one to two HD 5870s on X58 and P55. In theory, X58 should have improved percentages because each GPU gets 16 PCIe 2.0 lanes while Lynnfield only provides 8 PCIe 2.0 lanes per GPU.


Based on our single card results, there are not a lot of surprises here. At stock speeds, the X58 has a 7% scaling advantage over the P55 and 6% when overclocked in the GPU centric Ranch demo. In the Playback Action benchmark, the results favor the P55 by almost 2%.

When it came to actual game play, there were no differences between either platform in the game. In fact, it was very difficult to discern which system was being utilized. The key giveaway was the foot warming heat coming from our case with the X58 overclocked. Our ambient temperature in the test room rose 2.1C over the course of testing with the X58 installed compared to 0.7C with the P55.