We utilize FRAPS to capture our results in a very repeatable section of the game and report the median score of our five benchmark runs. H.A.W.X. responds well to memory bandwidth improvements and scales well with GPU improvements. 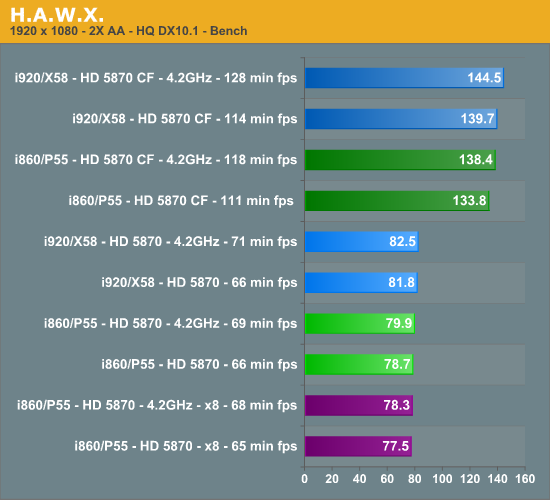 The stock HD 5870 single card x8 configuration is around 1% slower in average frame rates. The 4.2GHz single card x8 setup is slightly slower than either the stock P55 or X58 setups. The stock/overclocked single card HD 5870 P55 platform is 3% slower than the X58. Once again, there was no difference in actual game play, especially considering minimum frame rates are above 65fps in each instance. 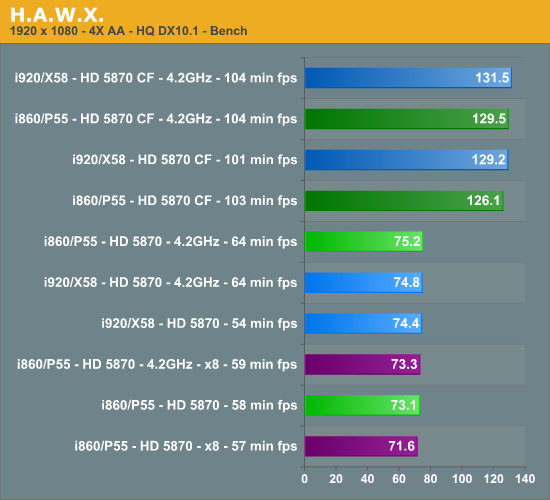 
At stock speeds, the X58 has a 3% scaling advantage over the P55 and 5% when overclocked in the 2xAA benchmark.


Minimum frame rates and scaling favor the X58 in our stock clock speed results by 4% and 9% when overclocked in the 2xAA bench. In the 4xAA benchmark, the X58 has a 10% advantage at stock speeds and it is dead even when the two platforms are overclocked.