In the past we’ve had to make concessions for single-threaded application performance on modern day quad-core processors. For example, $266 will buy you two 3.33GHz cores or four 2.83GHz cores from Intel. I generally recommend going the quad-core option but there’s no getting around the fact that you do give up some performance when an application can’t take advantage of more than two threads.

With the Core i7 Extreme 975 the CPU can run at up to 3.60GHz when only one core is active (3.46GHz if more than one core is active). In my testing I found that the CPU almost always ran at its maximum turbo frequencies.

The graph below shows single-threaded performance in Cinebench R10. Note that while the Core 2 Duo E8600 (3.33GHz) was the top performer in this test for quite some time, the Core i7’s Turbo Mode has ensured that it’s no longer true. 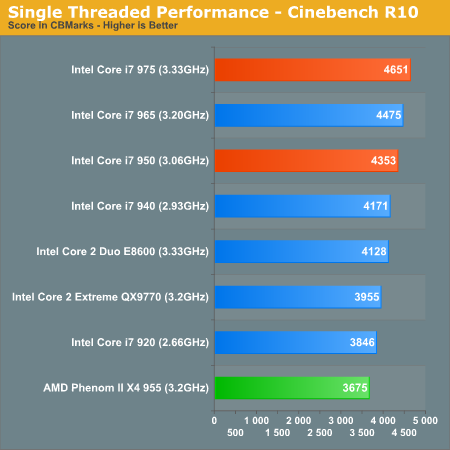 The biggest issue I see with the i7’s Turbo Mode today is that you only get one speed bin improvement (+133MHz) if 2 or more cores are active. The biggest boost (+266MHz) only comes when only a single core is active. Perhaps we’ll have to wait for Lynnfield for that.