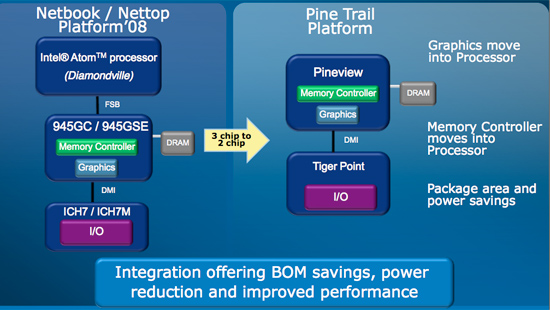 Let’s first start with breaking down the codenames. The new Atom platform for netbooks/nettops is called Pine Trail. Pine Trail refers to the combination of CPU and chipset. 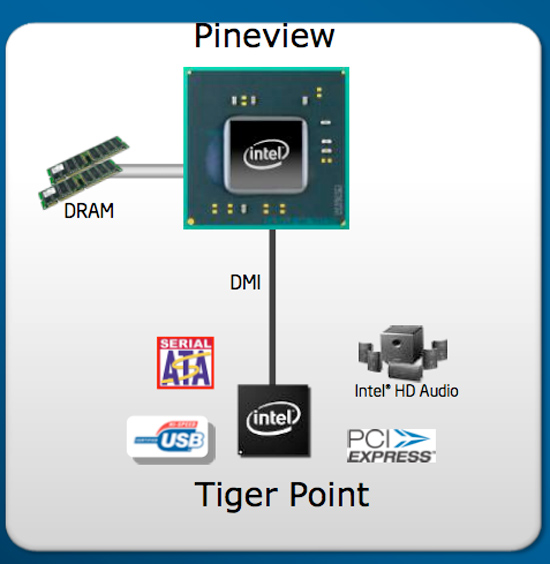 The CPU in this case is the next version of the Atom core. Still based on Intel’s 45nm process, this new Atom (codenamed Pineview...yes, confusing) brings both the memory controller and GPU core on-die. The current Atom for netbooks/nettops is codenamed Diamondville.

Intel wasn’t very specific about the memory controller or graphics core in Pineview but I’m guessing we’ll see a single-channel DDR3 memory interface and perhaps some evolution of the current Intel GMA core. Since the chip is still a 45nm part, it’s feasible that Intel could integrate the same GPU being used on its upcoming Westmere processors which is also 45nm.

The 945 GMCH used on current Atom platforms is built on a 130nm process and draws more power than the Atom CPU itself. Intel’s first mini-ITX Atom boards use a bigger heatsink on the GMCH than they do on the Atom CPU:

Bringing the graphics core on-die will help significantly reduce thermal output. Intel is expecting many more fanless netbook/nettop designs thanks to the change. Another side effect is that the new Atom platform will be easier to implement using a 4 layer motherboard. Currently many Atom designs use 6-layer motherboards, which are more costly to manufacture.

Remember that the Atom processor is an in-order architecture, making its performance very dependent on memory latency. The move to an on-die memory controller should significantly reduce memory latency and thus have a very positive impact on performance. Atom doesn't aggressively prefetch like Intel's high end desktop processors, so long trips down memory lane are very painful.

Intel is expecting to see the first previews of Pine Trail based netbooks/nettops at Computex next month. If you’ve been thinking about a netbook/nettop and don’t need one right away, you may be better served by waiting until the end of this year.