Our retail board arrived last week and now we aim to tie up the loose ends we left in our first look using the engineering sample (ES) board. The loose ends revolve around cooling, additional heavy OC stuff (for the intended audience), and functionality.

Not many people can afford a $449 motherboard. In fact, we seriously doubt anyone in his or her right mind would pay that much for a motherboard not installed in a server responsible for a company's business. However, there are the few, the proud, the extreme benchmarking crowd who swoon over products like this one.

We have spent a lot of time with this board. Probably too much time, once we looked over the logbook and thought back to the first day our early engineering sample board arrived in the labs. We were there during the development phase and stuck with it all the way through to its release. We never regretted the journey and sound like sentimental fools at this point, but it's not too often a product like this comes along in our business.

It is an interesting product and one we cannot put down long enough to write a ten thousand-word diatribe for it. This board is a beast; it makes no apologies for its cost, its purpose, or in your face configuration. It only asks that you have enough knowledge about overclocking to get the most out of it. That really is the crux of this board as it is all about overclocking. 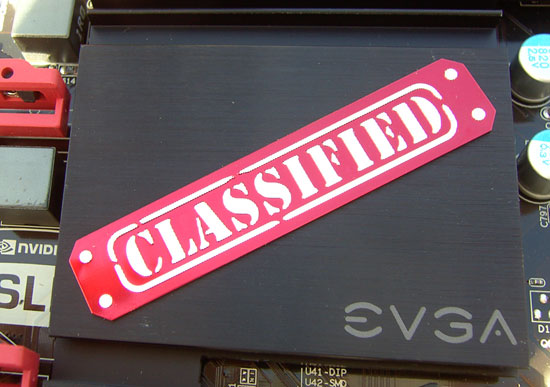 For those not interested in extreme overclocking or wanting a trophy board in their pimped out case, there are much better values in the land of X58. Keep this in mind as our follow up today concentrates on overclocking and not general performance. The board performs just as well as any other X58 motherboard when it comes to running Excel or transcoding the latest movie. In 3D gaming, it is a couple of percent slower than the boards without the NF200, but that penalty is never noticeable without a benchmark.

If this is a deal breaker for you and you would like to play with the Classified design sans NF200, you will be pleased to know this option is now available on a non-NF200 model (E760) that comes in at a slightly lower price of $399. We cannot address the performance loss or overclocking ability of A vs. B at this point, as our non-NF200 Classified board has not arrived. However, we will hedge our bets that performance figures in most standard hardware configurations will be the same as what we have already experienced, with the NF200 GPU intensive stuff 1-2% behind the non-NF200. We think one advantage the NF200 board might have is in extreme overclocking as the load on the X58 is reduced, but more on that later.

For now, let's look at what the NF200 Classified can do in full retail form when teamed up with the right components and is properly tuned.

Revisiting the Retail Board
Tweet
PRINT THIS ARTICLE
Comments Locked