We're in the midst of a price war folks, and at a time when the global economy is looking a little shaky this actually works very well for us. Let's recap what's happened.

AMD launched its first truly competitive CPUs in over two years in January: the Phenom II X4 940 and 920. Priced at $275 and $235 respectively, these two chips beat out the equivalently priced Intel CPUs, the Q9400 and the Q8200. If you haven't already, I would strongly suggest reading that article in order to get the background information necessary about what was changed in Phenom II to make it so competitive.

Less than two weeks later Intel responded by cutting its quad core prices. The table below shows what happened:

We really have to applaud both companies here. Intel for responding so quickly and effectively; the 40% price drop on the Q9650 just made sense and now you can have a chip with 12MB of L2 cache for under $300 thanks to the Q9550. And we have to thank AMD for keeping the pressure on and making this possible.

Things get more complicated with today's announcement; AMD is launching no less than five new Phenom II CPUs. Their specs and model numbers are below:

The Phenom II X4 910 is just a lower clocked version of the CPUs we reviewed last month. The 800 series is a bit more unique, albeit not in a good way. The 900 series all have 2MB of L2 cache on die and a 6MB L3; the 800 shrinks the L3 down to 4MB. If you remember back to our original Phenom II article I argued that a big reason for the original Phenom's failure was that it didn't have a large-enough L3 cache. With a 6MB L3 the 900 series seemed like a good balance between L2 and L3 cache size, but going any smaller than 6MB could prove to be overly detrimental to performance. Also keep in mind that Intel's Ronak Singhal was adament that Nehalem shouldn't have any less than an 8MB L3 (or 2MB per core), even the mainstream Core i7 derivatives are slated to have 2MB of L3 cache per core (4MB for the dual-core versions). 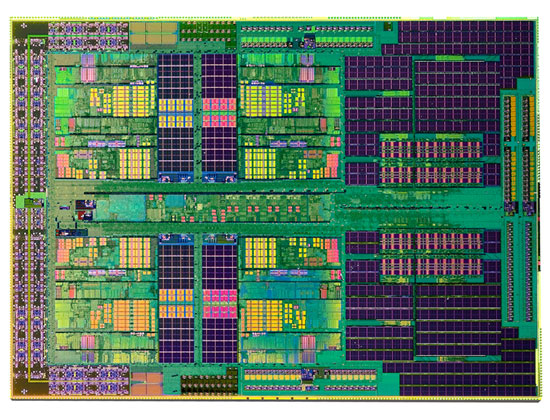 The 800 series is simply an example of die harvesting. Some of the die have too many defects in the L3 cache, but fully functional cores. Instead of throwing away these CPUs AMD turns them into the Phenom II X4 800 series. While physically the same die size and transistor count of the 900 series, these chips simply have some of the L3 cache disabled: 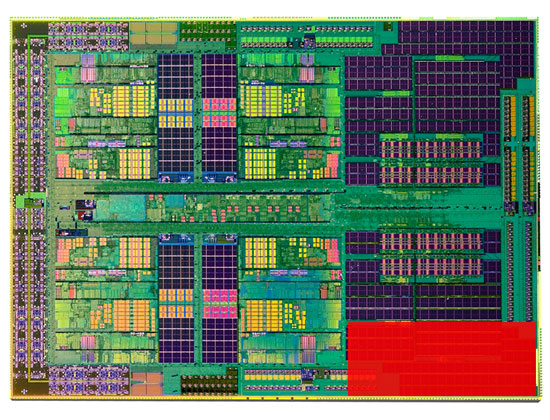 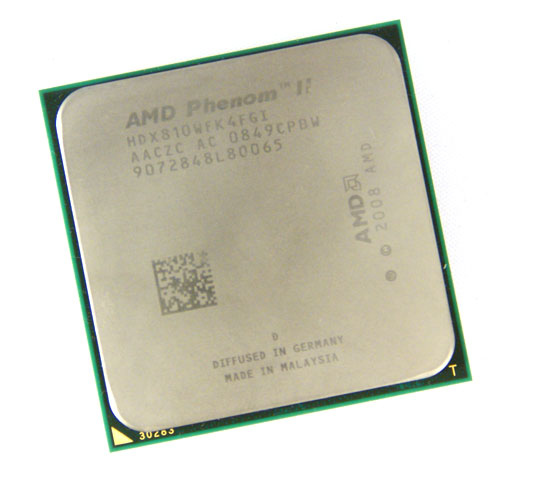 We've also got the Phenom II X3 720 and 710. These are both triple-core derivatives, once again they are physically the same die as the Phenom II X4 900 series, but this time with only 3 cores enabled. These are further harvested parts used simply to improve yields. I suspect that between the Phenom II 900, 800 and 700 series AMD is able to use as much of a single wafer as possible, all through harvesting and by targeting different price points. Note that this is a smart strategy to compete with Intel because Intel's 45nm yields are already quite mature, thanks to a year-long head start. 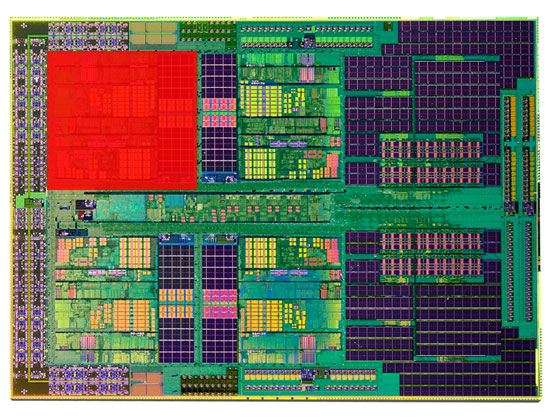 As yields improve over time you can expect some of these parts to go away. But for now, AMD basically has a single Phenom II die that it's selling three different ways.