I called it an ugly looking reference machine. So NVIDIA came back and painted it white. It worked for Apple after all, right? 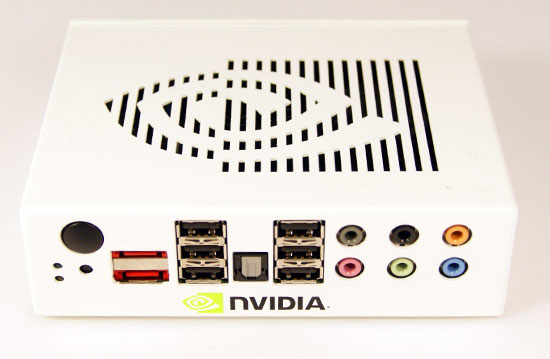 As much as I can appreciate beauty, what truly matters here is what’s on the inside and that’s what NVIDIA gave me the opportunity to do over this past week. If you haven’t already seen it, what I’m talking about is NVIDIA’s Ion reference platform. In a nutshell it’s Intel’s Atom processor paired with NVIDIA’s GeForce 9400M chipset. 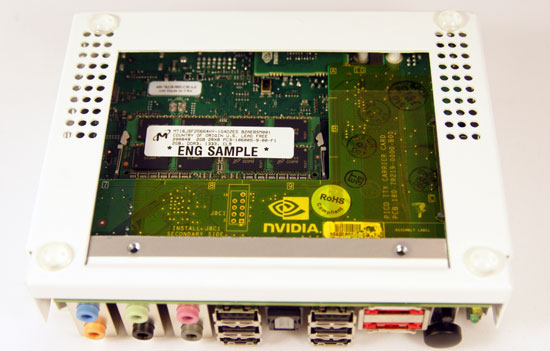 I first brought you news of Ion in the middle of December 2008. It was delivered in the ugly box mentioned above. It seemed cool, it worked, but I only spent a few hours with it and wasn’t able to benchmark it.

Our next encounter was at CES. NVIDIA called me up to its hotel room and offered the opportunity to benchmark an overly spec’d Ion box against a standard netbook boasting a much lighter config. That didn’t work out so well.

This time NVIDIA shipped me a system, now in white. And I could do whatever I wanted with it. 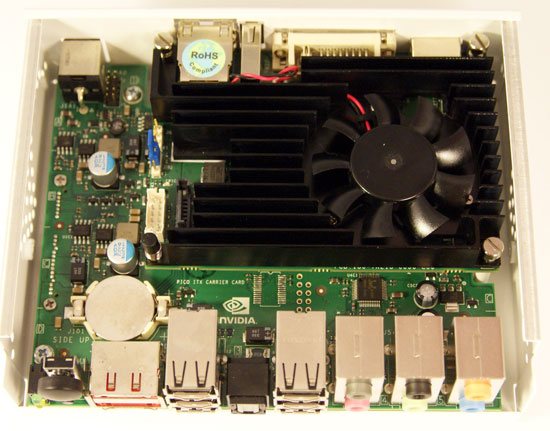 It doesn’t take a visionary to see why Ion would be great. Take a standard Atom system and give it a modern chipset with better graphics and you’ve got Ion. Performance goes up, everyone’s happy. Of course it’s nice to be able to quantify the performance advantage which is what I’ll be doing today, but for all intents and purposes we’ve known that Ion is a good thing.

The Need for Ion

Currently most Atom based desktops and notebooks use Intel’s 945G chipset. That’s the chipset before G45 and G35 - heck, even before G965 - released back in 2005. It features Intel’s GMA 950 graphics core, hardly high performance even by Intel’s standards. It’s a two chip solution built on a 130nm process and uses ICH7 for all south bridge/IO functions.

The problem with 945G is that it’s old, it’s slow, and it takes up a lot of space. The aging 945G only supports DDR2-667 and generally only gets a single channel of memory on most netbooks/notebooks/desktops. The chipset’s performance isn’t terrible but it’s a bit bandwidth constrained. The combination of the Atom CPU, 945 GMCH, and ICH7 chips takes up quite a bit of motherboard real estate. While that’s acceptable on a desktop motherboard, it is a bit cramped in a netbook. 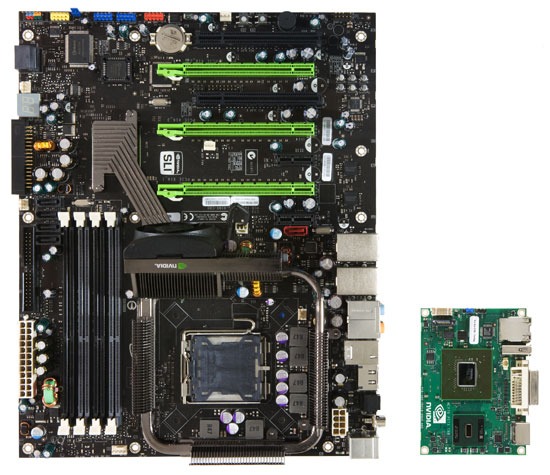 Intel offers a more compact alternative in the form of the US15 chipset, but that doesn’t really address the graphics performance issue. 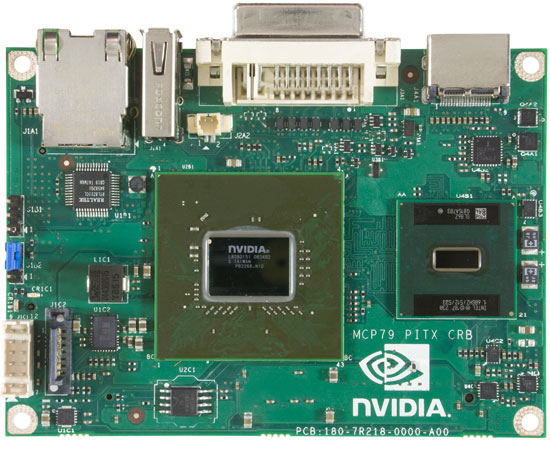 NVIDIA’s Ion comes in as an alternative two-chip solution. The GeForce 9400M is a single chip, the other chip is the Atom, and the two make up Ion. You get a modern memory controller as well, supporting both DDR2 and DDR3 memory (up to DDR3-1066). Graphics performance is better than Intel and you get full HD video decode support.

The Cost of Ion

I point-blank asked NVIDIA what is required for an OEM to develop an Ion based system. NVIDIA responded by saying that the only thing necessary is that the OEM purchase a GeForce 9400M chipset; there are no required platforms or anything like that. The Ion reference PC is nothing more than a reference, and it doesn’t need to be followed.

There are a few dozen Ion reference platforms out in the hands of OEMs and decision makers in the industry. NVIDIA expects Ion to add between $50 and $100 to the cost of a typical Atom machine.

Availability is still slated for sometime in 2009, with some systems slated to arrive this summer.

Unlike the CES Ion comparison, I leveled the playing field. NVIDIA sent a fully configured Ion reference box with 2GB of DDR3-1066 and a dual-core Intel Atom 330 running at 1.6GHz.

I purchased an Intel 945GCLF2 from Newegg for less than $60 (open box). This is a mini-ITX 945G motherboard with a single DDR2 slot and an on-board Atom 330. I installed a 2GB DIMM in the board and created a comparable machine to the Ion reference platform.

I used an Intel X25-M SSD so you can compare the non-gaming numbers from this review to other CPUs in our benchmark database.

In the gaming tests I used a GeForce 9300 motherboard and paired it up with a Celeron 430 to show what a faster CPU could get you with the same graphics used on an Ion platform. I tested with both single and dual channel DDR2-800 memory configurations here, and overclocked the 9300 to the 9400's GPU speeds.